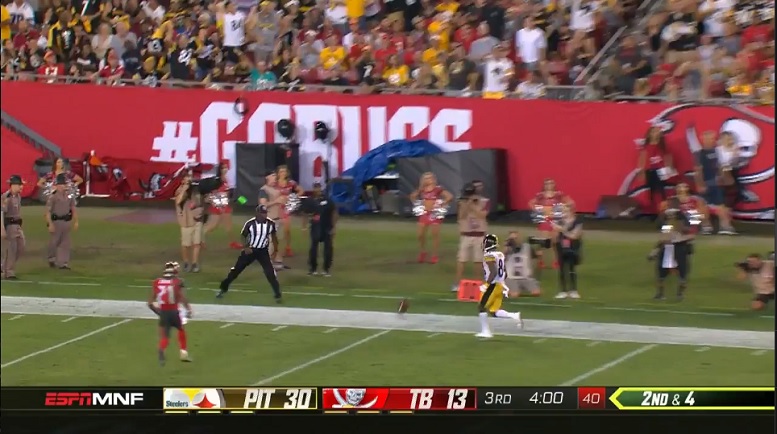 There’s been an awful lot of talk the last few weeks about the below average start of the season, at least by his statistical standards, that Pittsburgh Steelers wide receiver Antonio Brown has had. After all, Brown has just 24 catches for 210 yards and 2 touchdowns entering Week 4 and even one if his own teammates, fellow wide receiver JuJu Smith-Schuster, has him topped in those first two statistical categories.

The talk about Brown’s seemingly low receiving stats three weeks into the regular season even resulted in Steelers quarterback Ben Roethlisberger going on the radio this past week to say that perhaps the reason for that is related to him not forcing the football to the wide receiver as much as he’s maybe done in the past.

“Well, they’re definitely still doubling and keeping an eye on him [Brown] and grabbing and holding him like they always have,” Roethlisberger said on 93.7 The Fan. “But maybe it’s just as much me looking at other guys, not trying to force it to him. JuJu’s doing some great things – Jesse James, Vance [McDonald]. James Washington is making plays for us – Switz [Ryan Switzer] now. You know, I think it’s just maybe me just not forcing it into those coverages and forcing him the ball and in the past, I know I forced them, and some good things have come of it. But I’m just trying not to do too much of that because other guys are making plays. So, that might be part of the reason the numbers aren’t what they have been in the past.”

As I posted almost immediately after Roethlisberger made those comments, while him maybe not forcing the football to Brown as much at the start of this season might sound good in theory, you all should probably be told that he’s targeted the wide receiver a team-high 42 times, which by the way, was the second-most targets league wide entering Week 4.

Something else to consider when talking about Brown’s targets through the first three games of the regular season is the fact that his 42 times is the most of his NFL career through Week 3. Additionally, only seven other players have been targeted more times than Brown has through the first three games of an NFL season dating back to 1992, according to Pro Football Reference.

Now that we have established that Brown is indeed being targeted plenty of times, let’s now examine why he only has 24 catches for 210 yards and 2 touchdowns entering Week 4.

For starters, of the 18 passes intended for Brown so far this season that weren’t caught, 7 of them landed out of bounds. 2 others were intercepted and one of those was a forced throw by Roethlisberger while the other was an obvious miscommunication between the two players on a deep pass. 4 others were off target throws from Roethlisberger with 2 of those being very low and thus uncatchable. One other was another miscommunication on the left sideline between Roethlisberger and Brown. That leaves 3 remaining incompletions and while 2 of those can probably be classified as drops by Brown, the other one was defensed by a rookie cornerback.

Of the 18 passes thrown to Brown so far this season that weren’t completed, 9 of them flew more than 15 yards in the air past the line of scrimmage and 8 of those more than 20 yards in the air. Of those 8, none, nada, zero were catchable and Brown was open on a few of those routes as well.

Brown was asked to talk about his seemingly lack of production to date on Friday and while several times during his interview he suggested media members just watch the tape, he did let one quote fly that might now get thrown back in his face.

“Obviously, it’s out of my control; I can’t throw it to myself,” Brown said.

Am I worried about any of this entering the Steelers Sunday night game against the Baltimore Ravens? Absolutely not as it’s only a matter of time before quarterback and wide receiver start hooking up down the field like they’ve done so many times in the past. That is, of course, as long as Roethlisberger can start throwing the football where Brown has a chance to catch it.

I wish several members of the media would take Brown’s advice and watch the tape. If they finally do, they’ll see Roethlisberger is just as much at fault for Brown’s slow start to the season as the wide receiver is and perhaps even more.