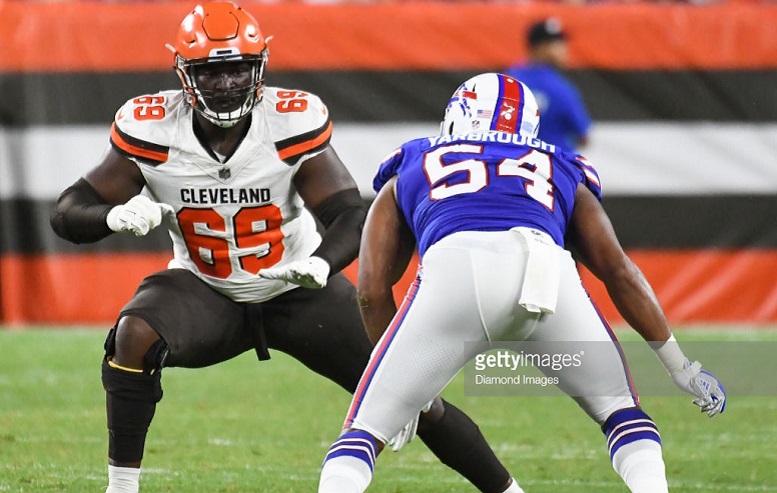 The Cleveland Browns have decided to let a rookie undrafted free agent start their 2018 regular season opener against the Pittsburgh Steelers.

During his Friday afternoon press conference, Browns head coach Hue Jackson announced that tackle Desmond Harrison, a rookie undrafted free agent this year out of West Georgia College, will start on the left side Sunday against the Steelers.

“Desmond Harrison will be the starting left tackle,” Jackson said on Friday. “Joel [Bitonio] will start at guard and on we go.”

When asked what led to his decision to start Harrison at left tackle in lieu of making left guard Joel Bitonio start the season one spot to his left, Jackson said the state of Texas product earned it.

“Just practice,” Jackson said. “Watching him over the last few weeks with the ones. Out at practice and watching him in games, obviously, he’s talented enough. I think this is hopefully going to be our lineup as we travel through the season. He’s handled everything really well and I feel good about those five guys gives. I think it gives us the best chance to have the most success.”

Harrison started the Browns training camp this year buried on their depth chart due to a toe injury. However, he quickly moved up the depth chart and after missing the Browns preseason opener this year, he played just over 100 offensive snaps at tackle in the remaining three exhibition games.

Harrison starting Sunday at left tackle against the Steelers means that he’ll likely have several battles against outside linebacker Bud Dupree and defensive lineman Cameron Heyward, as both should line up on the right side of the Pittsburgh defense quite extensively throughout that contest.

Dupree, who had his fifth-year option picked up by the Steelers earlier in the offseason, certainly needs to get off to a great start on Sunday and he’ll have no excuses if he fails to do so with him going against a rookie undrafted free agent making his first career NFL start.

In addition to Harrison at left tackle and Bitonio at left guard, the Browns starting offensive line on Sunday will be rounded out with JC Tretter at center, Kevin Zeitler at right guard and Chris Hubbard, formerly of the Steelers, at right tackle.