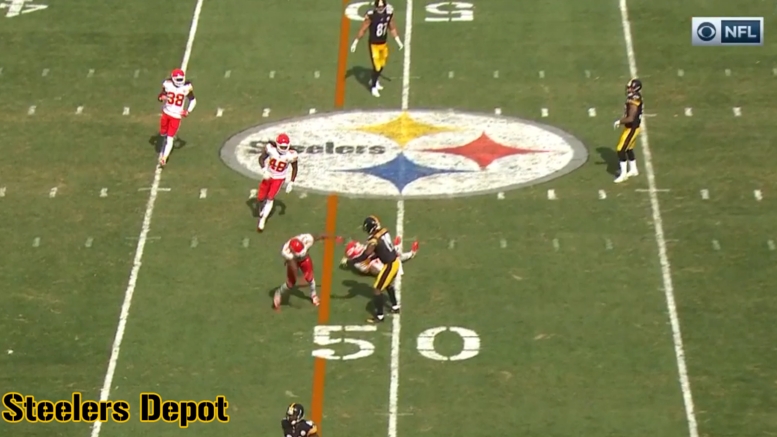 It’s a new season, with new features. As I talked about last week, for the 2018 regular season, we are beginning to chronicle the Pittsburgh Steelers’ dropped passes, or catchable passes that were not caught, each week. There were two drops last week by Jesse James and Ryan Switzer.

For the team’s second game against the Kansas City Chiefs, I have one play that I considered ‘officially’ to be a drop, but even in this case, the available angles make it a difficult case to make. I will also cover two other plays that I believe presented catchable passes that were not caught.

The one pass that I marked down as a drop was by JuJu Smith-Schuster early in the fourth quarter. There was no replay of the throw, and the coaches tape doesn’t provide adequate angles, but viewing the pass in slow motion, it seems clear that the receiver had the ball hit his hands unimpeded on the way there, and he loses possession before the defender is able to cause him to lose it. He hung his head a bit after the play.

The other two plays I’m going to cover here are both on passes to James, neither of which actually ended up counting. Both came on first and goal, and both were wiped out by defensive holding penalties. On both occasions, the team also went on to score, so no harm, no foul. However, both came in the end zone and could have added to his impressive tally on the day.

The first of the two plays came in the middle of the second quarter from the Chiefs’ four-yard line. The hold by the safety is evident, but so is the clarity with which it can be seen that James had both hands on the football before almost instantly losing it. There is a question of whether or not he would have gotten himself down inbounds as well.

Last and perhaps least was a similar occurrence in the middle of the third quarter, this time on first and goal from the five. The angles here are less satisfactory than the previous play, but from the end zone view, it does appear that Ben Roethlisberger gets the ball over the defender’s head and into James’ arms.

The linebacker in coverage does come in after that to work to dislodge it. Whether or not James would have caught the ball without the defender’s efforts is a question. The bigger concern here, however, is the fact that Roethlisberger missed this throw. As you watch the play develop it’s evident that he had room to lead the tight end further to the left, rather than making him reach behind him.