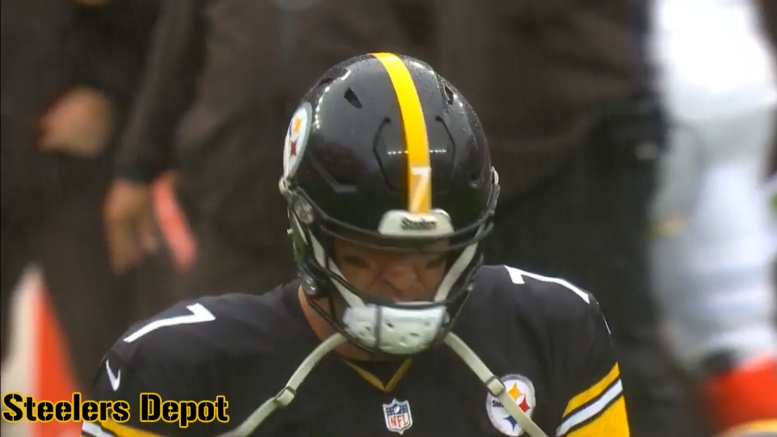 Question: How much rust does Ben Roethlisberger have left to knock off?

I think that by most fair accounts, it would be accurate to say that Steelers quarterback Ben Roethlisberger had a sloppy game, and while the weather was obviously a factor in that, his performance struggles went beyond the downpour.

That’s not to say that he played a terrible game, by any means, aside from ball security—which is obviously a huge deal—but a lot of what we saw from him during the game was not to his usual high standards.

Roethlisberger got off to a very slow start last season, but by the end of the year he was playing some of the best football of his career. It was expected that with his greater attention to his conditioning he might be able to avoid a slow start, but 21 points and three interceptions, plus a shaky internal clock that helped lead to two lost fumbles against the Browns proves otherwise.

He still threw for 335 yards and was efficient with averaging 8.2 yards per throw, but a lot of that came in chunks, including a 67-yarder and a 37-yarder. He only completed 23 of his 41 pass attempts, which is just over 56 percent, and there weren’t many catchable passes that ended up on the ground.

Some of it was good defense. Some of it was bad communication. But a lot of it was just bad ball placement or poor decision-making. While he threw three interceptions—at least one of which was on his receiver—there are a few other passes that he put in dangerous situations, including at least one or two that very nearly were picked off.

So the question is, did Roethlisberger get the rust out of his system during this rainy day on the road? Are we going to see a more consistent performance when the team hosts Kansas City next week? And is he not playing enough in the preseason to avoid these types of showings early in the year?