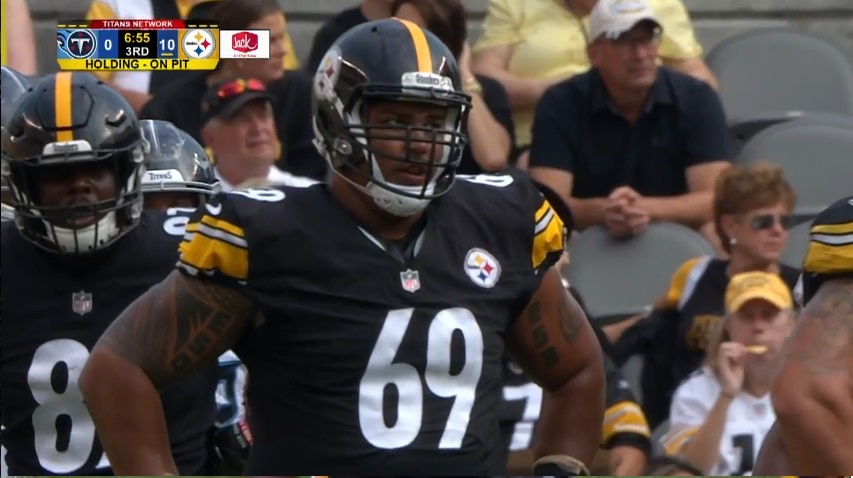 It wasn’t a “banner” day for offensive tackle Zach Banner in terms of play, at least, not at first glance, but there’s one clear victory he can take away from Saturday afternoon. And for the record, the hold in that above photo wasn’t called on him.

Despite being signed only two weeks ago to the day, Banner worked as the second-team tackle yesterday, playing out the entire second half. He lined up opposite Chukwuma Okorafor, flipping between the left and right side. Just as importantly for his chances to stick, OT Jake Rodgers didn’t see any action.

It’s a quick change from where Rodgers has been running throughout camp. He had been the second-team tackle, playing both sides, as all those at his position do. But a rough game against the Green Bay Packers, we charged him for a sack, may have made the Steelers consider a change.

Banner was certainly a “pedigree” player coming out of the draft. One of the largest tackles in recent memory, 6’8, 362, Kevin Colbert noted Banner has gotten his weight under control. That doesn’t feel cliche either. Looking at him in practice, his body doesn’t look sloppy. He’s still a mountain, don’t get me wrong, but generally seems well put together.

“He’s got his weight under control at this point,” Colbert said earlier this month. “You know, he’s had a few weight issues in his past and he’s just a big person. He’s actually six-foot-eight and he weighed in at 362, I believe it was yesterday. And that’s really lean for a six-eight guy. Big Al’s right at 6-9, but Al’s a little bit longer and leaner, you know, he’s going to be in that 330 range.”

He hasn’t been perfect, obviously. Size gets him a long way but when pass rushers are able to win the edge, Banner struggles to recover, relying on his length and strength to shove the rusher upfield and hope the quarterback gets out of the way. But he hasn’t looked out of place so far.

The Steelers, like they do with running backs, are drawn towards linemen big enough to supply their own gravitational pull. Alejandro Villanueva was a big lump of clay Mike Munchak has molded. Matt Feiler was a 6’5, 330 tackle who Pittsburgh put on the practice squad and let him work his way up the ladder. Ramon Foster was in a similar boat years ago. Let Munchak take a guy with some of the tools, and definitely the size, and you’re maximizing the odds of success.

There’s still one preseason game remaining and both those guys, Banner and Rodgers, will play. A lot. But right now, Banner is driving the bus.