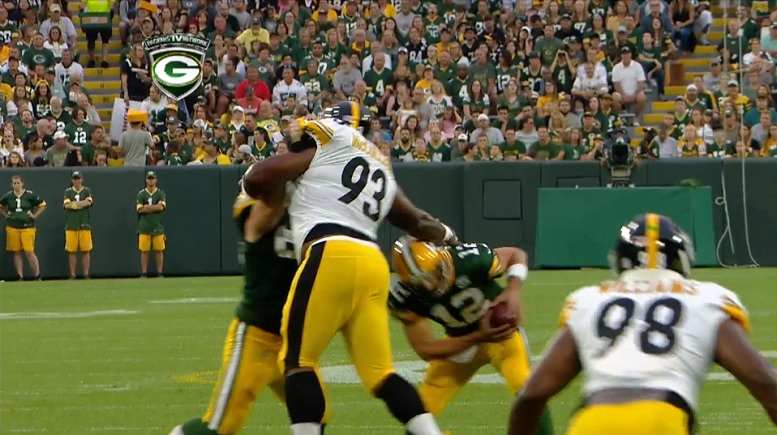 Has Pittsburgh Steelers defensive tackle Daniel McCullers been one of the biggest surprises this year during the team’s training camp and first two preseason games? It certainly seems like that might be the case. After initially heading into this year’s training camp as a player seemingly outside the proverbial roster bubble, McCullers, the Steelers sixth-round selection in the 2014 NFL Draft out of Tennessee, certainly appears to be inside it with two weeks remaining in this year’s preseason.

“I thought he’s had a good camp and I think that he’s taken that into games,” Steelers head coach Mike Tomlin said after the team’s Saturday practice when asked what he’s seen out of McCullers so far this summer. “But, you know, we got two significant weeks left and two significant performances so he’s still writing that story.”

McCullers has played a lot at nose tackle and defensive tackle in the Steelers first two preseason games and he even received the start over fellow defensive tackle Javon Hargrave, the team’s third-round selection in the 2016 NFL Draft, this past Thursday night in the second preseason game of 2018 against the Green Bay Packers.

“Dan’s looked better,” said Steelers veteran defensive lineman Cameron Heyward of McCullers on Saturday, according to Teresa Varley of steelers.com. “He still has to improve. I love the way he is coming off the ball and kicking center’s tails. He has to disengage and get off blocks. That is the next step. Dan is a big man and this is a big guy football league. If you can get him going the right direction it’s going to help us.”

With McCullers and Hargrave getting a lot of the nose tackle and defensive tackle reps so far during the preseason, fellow defensive lineman L.T. Walton, hasn’t logged as much time directly over the ball so far this summer. Tomlin was asked about that on Saturday and he essentially said not to read too much into that during the preseason.

“We were looking at a variety of people. I’m not eliminating anyone but we are focused kind of on Dan [McCullers] and you’ve seen Tyson [Alualu] some there,” Tomlin said Saturday. “L.T.’s had more reps over the long haul at that position than some of the others that are dual position guys. So, like I’ve mentioned to you guys before, I wouldn’t read too much into rotations and who’s working with what group and those things. The reps aren’t distributed evenly, they’re distributed appropriately so that we can gather information about all people involved.”

In the Steelers first two preseason games of 2018, McCullers has logged right at 35 total defensive snaps on his way to registering one total tackle and 3 quarterback hurries. He almost sacked Packers quarterback Aaron Rodgers Thursday night. Rodgers, however, was able to duck the desperation grasp of McCullers on his way to scrambling for 5 yards on the Packers first offensive position of the game.

Will McCullers ultimately once again make the Steelers 53-man roster as their sixth defensive lineman? We’ll see, but at this point of the preseason it’s hard to bet against that happening. The Steelers drafted former Alabama defensive tackle Joshua Frazier in the seventh-round this year but he hasn’t played a lot so far during the preseason. In fact, just 14 defensive snaps in total, according to my count. Frazier might be headed to the practice squad this year and especially if Walton and McCullers are both ultimately retained.

“I haven’t been told anything,” McCullers said, according to Ray Fittipaldo of the Pittsburgh Post-Gazette. “I’m just going out there and working every day. I just go out there and show them what I can do. We’ll see what happens.”