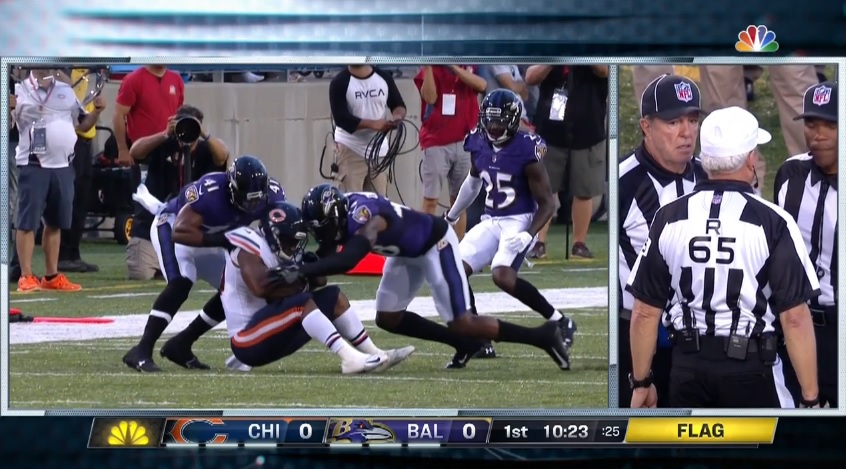 I’ve got good news. And I’ve got bad news.

Which do you want to hear first?

Ok, the good news. Football is back. It might be preseason football but hey, the wait is over. Go buckwild.

The NFL is going to make it as unwatchable as possible.

While the league has seemed to fix their catch rule, simplifying it to eliminate confusion and inconsistency, they’ve replaced it with their haphazard helmet-to-helmet rule. In essence, they’re going a person going from three packs of smokes a day to drinking a whole bottle of Johnny Walker Blue. It’s different but not, you know, better.

The rule, a personal foul for any player who lowers their helmet and initiates contact with the helmet of another player, is going to be a disaster. Yesterday was the first test of the rule. And while there were a couple calls that I’m legitimately glad they’re policing out of football, there was plenty of chaos too.

This, for example, was a personal foul.

“Lowering of the helmet” This is going to be a disaster when the games count. pic.twitter.com/h3lRP1r24X

Jacobs issued a follow-up tweet that said this was actually a penalty for a defenseless receiver hit. But if the refs can’t even explain what the penalty was…woah boy, strap in for a tough year.

By the end of the game, there was frustration from fans and analysts across the board.

If I’m a @NFL head coach watching the flags thrown around in the preseason for helmet hits and unnecessary roughness, I’m telling my OC to throw the ball all over the yard. I’m using more spread and empty sets, and daring defenders to make “legal” tackles in the open field..

NFL referees are going to be a historic disaster this year. The new helmet rule is going to cost a team in a big game.

If that is a penalty, then you may as well take the pads off. I mean, that’s just dumb.

To be fair, it was the first game, and there’s time for the refs to seek some measure of clarification as the preseason progresses. Former OL Geoff Schwartz tried to add this reassurance.

Real quick on the helmet rule. They are going to over call it during the preseason. When they changed the hands to the face rule a few years ago, they threw 5+ flags a preseason game on the OL. They realized it was called too often and stopped the frequency during regular season

But with an inexperienced referee crew that lost some key faces and the general terrible way the league has handled these muddy rules, it’s hard to feel confident they’ll get everything figured out by Week One. And it’s going to cost some team, maybe Pittsburgh, maybe someone else, a victory.

It’s going to be a loooong year.