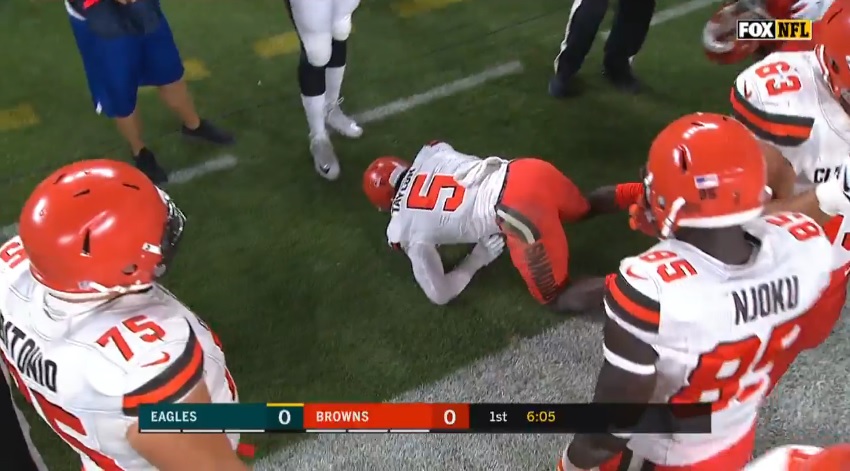 Tyrod Taylor is the expected Cleveland Browns starter when they take on the Pittsburgh Steelers Week One. But last night, Hue Jackson seemed hellbent on trying to change that.

Against the Philadelphia Eagles in a thrilling 5-0 win, Taylor seemed to suffer a serious hand/elbow injury after bracing himself following this throw. Keep in mind this was after Jackson decided to go for it on 4th and goal.

The good, if not a little miraculous, news is that Taylor didn’t suffer a broken hand. After getting an X-Ray, he came back onto the field and finished out the first half, finishing the day with a “meh” 11/16, 65 yard performance.

Taylor didn’t entirely avoid injury, however, suffering a dislocated pinky on his left, non-throwing hand. That forced him to hand the ball off with his right hand on some carries.

#Browns QB Tyrod Taylor’s injury to his left hand vs. the #Eagles was minor enough that he returned to the game, but source said it did include a dislocated pinky. Not major but still, ouch.

Needless to say, many fans, this one included, wondered why Taylor would keep playing in a meaningless game.

Instead of handing the ball off with his left hand only, Tyrod is using both. Clearly bothering him. Not sure why he’s in the game. This is so stupid.

Tyrod’s tough as nails and I’m sure his coaches/teammates loved this, but I remain perplexed that Hue let him go back in. https://t.co/X6wDlX5oRa

Hue Jackson showing being a head coach is too much for him by re-inserting Tyrod Taylor after injury into THE 3RD PRE-SEASON GAME.

Taylor is still expected to start Week One versus the Steelers. Though the way this is going, Jackson is going to make him play the entire preseason finale, too.