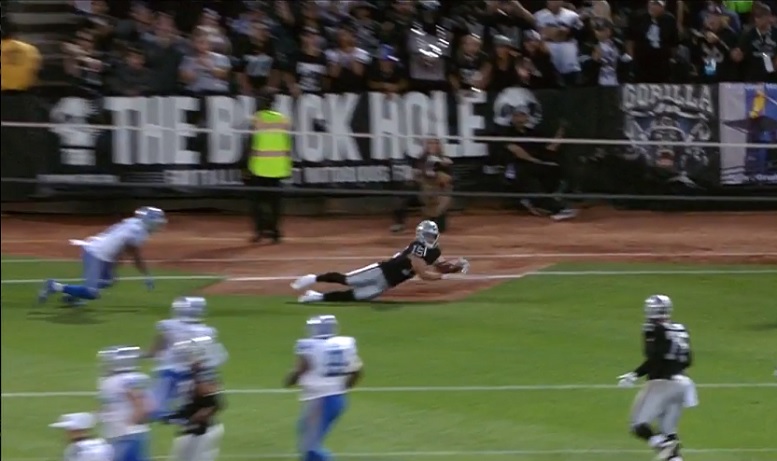 For a former fourth-round selection who has yet to log 100 total offensive snaps as a professional, new Pittsburgh Steelers wide receiver Ryan Switzer already has quite an NFL backstory and mainly because he’s already been traded twice since being selected in the 2017 NFL Draft.

For those of you who don’t already know about Switzer’s brief NFL history, he was selected in the fourth-round of the 2017 NFL Draft out of North Carolina by the Dallas Cowboys and after one season with them he was traded to the Oakland Raiders during the 2017 NFL Draft in exchange for defensive tackle Jihad Ward. That trade reunited him with Rich Bisaccia, who was his special teams coach during his 2017 rookie season with the Cowboys.

Not long after acquiring Switzer from the Cowboys, Raiders head coach Jon Gruden was asked about the team’s new wide receiver and return specialist during Oakland’s rookie minicamp.

“I like Switzer,” Gruden said. “I liked Switzer a lot at North Carolina. He’s a fourth-round draft choice. He was Mitch Trubisky’s go-to guy. My brother (Washington Redskins head coach Jay Gruden) doesn’t like Switzer. He took an 83-yard punt home against them last year. That’s what he can do. We want a lot of competition for the punt returner job. Dwayne Harris is very good at it. Jalen Richard has done it before. Switzer is outstanding and can also return kickoffs and I think he’s got some nasty quickness in the slot. And we’ve got a competitive situation going here at wide receiver, too, so I like that.”

We all know how things worked out for Switzer with the Raiders and Gruden essentially said a few days ago that they dealt him to the Steelers because they felt fellow wide receiver Dwayne Harris was essentially the better all-around wide receiver, special teams player and return specialist of the two.

Quite honestly, Switzer wasn’t given much of a shot as a wide receiver in his brief time with the Raiders as evidenced by him only playing 26 offensive snaps in Oakland’s first three preseason games. He was targeted just twice in those three preseason games and caught one of those passes for a 7-yard touchdown against the Detroit Lions.

After the Cowboys drafted Switzer, here is what owner Jerry Jones said about the North Carolina product.

“That’s a ‘Dak-friendly’ pick,’’ Jones said. “He likes that. That fits with him and how he did in college.”

Cowboys head coach Jason Garrett soon gave his thoughts on Switzer after the Cowboys had drafted him in the fourth-round.

“He’s a very good inside receiver as a slot, a lot of the same traits that Cole Beasley has and his ability to get away from people in man-to-man coverage, to find soft spots in zone coverage, very productive, very quarterback-friendly,” Garrett said of Switzer. “You can see him playing in Beasley’s role. You can see him playing in an offensive package where both those guys are out on the field at the same time. Really a productive football player in everything they asked him to do, and he took advantage of his opportunities.”

So, what about Switzer’s time in Dallas with the Cowboys? Quite honestly, I’m not sure the Cowboys even knew what they wanted to do with Switzer after they drafted him. Obviously, they envisioned him being their return man, a job he did well, but other than that, they apparently considered him more of an offensive gadget player than they did a slot receiver. In fact, the first three times that Switzer touched the football on offense during his rookie season it was part of designed runs, the first of which included him lining up in the backfield and taking a short pitch to the left side for 3 yards.

Switzer’s second and third touches as a member of the Cowboys came via jet sweeps from the slot. Both of those carries also each gained 3 yards. Of the 7 other touches Switzer would get the remainder of his rookie season with the Cowboys, one was another jet sweep that lost yardage. However, his six receptions on 7 total targets totaled 41 yards and 4 of those resulted in first downs with another catch going in the books as a successful play. The lone pass target he failed to catch was a result of Cowboys quarterback Dak Prescott throwing too high to him.

After the Cowboys traded Switzer to the Raiders this past April, the young wide receiver said he wondered if his former team maybe miscast him as a running back.

“The more I think on it, I think that they had a different plan for me than what I was capable of doing,” Switzer said in an interview with Patrik Walker of 247Sports about his role with the Cowboys. “I don’t know. Looking back, I had two or three rushes in the NFL before receptions and I was taking reps at running back at times. I don’t know if [they] were trying to use me as like a scat-back or what. There was a lot of talk about my high school days and being a running back and I don’t think I ever fit that mold as a change-of-pace back or someone with slide sweeps and carries.

“I don’t know if that’s the plan they had for me [because] it was never spoken, but when I try to piece these things together — that’s kind of what I’m thinking. … I think that had a little bit to do with it because I can’t really think of anything else. … I did, like coach [Jason] Garrett [told] me, I did everything [asked of me] and more. I felt like that, too. I’m not sure. That’s about as good of a guess as I have.”

Will Switzer ever amount to anything more than just a return specialist with the Steelers? It’s hard to say at this point but one would think they will certainly be interested to see how he can perform as a slot wide receiver in their offense as the 2018 regular season progresses. Realistically, Switzer won’t see a lot of playing time on offense this season with the Steelers barring injuries, but with that said, he still might could average 5 snaps a game after he has enough time to completely learn the playbook.

The Steelers really don’t have much invested in Switzer if he doesn’t work out as they only traded a fifth-round selection in the 2019 NFL Draft to get him along with the Raiders sixth-round selection next year. Even if he just turns out to be an average punt and kick returner, it was worth trading for him. For all we know, he might turn out to be a decent slot receiver as well. Maybe the Steelers will give him more of a chance in that role than both the Cowboys and Raiders previously did.