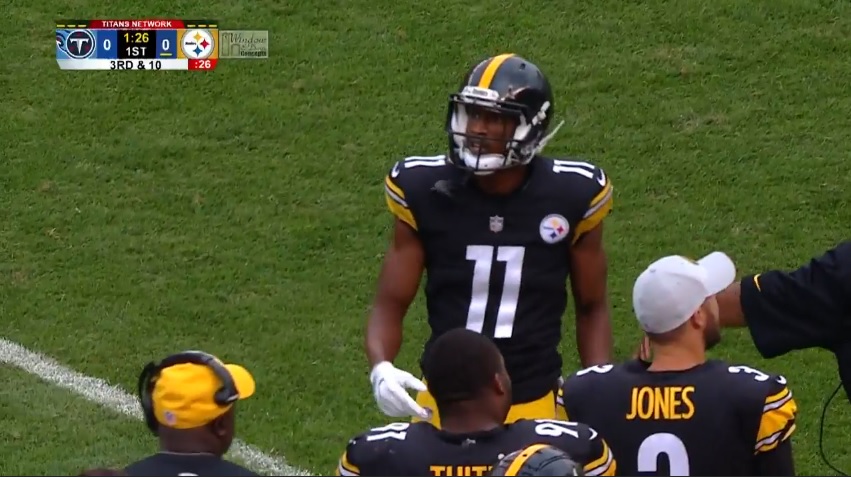 Let’s take a look at the five most important plays in the Saturday afternoon preseason game between the Pittsburgh Steelers and Tennessee Titans.

This might seem like an innocuous play to start this list off, but it was quietly a huge play for the Steelers early in the game.

Facing a 2nd and 9 at the Tennessee 32-yard line, Derrick Henry bounced off of his own lineman and found daylight outside. However, Steelers cornerback Joe Haden came up to meet him off right tackle. Haden misses the stop at first, slipping off the big back in Henry, but the veteran cornerback is able to get Henry on the ground late in the play thanks to an ankle-biting tackle.

If Haden doesn’t get Henry on the ground, the Alabama product is likely still running. It completely changed the drive for the Titans.

On 4th and 1 on the Titans’ side of the field, the Steelers were looking for the kill shot on their third drive of the game with the first-team offense.

Although Smith-Schuster got his hand on the ball, Roethlisberger threw well behind him on fourth down, resulting in a turnover on downs inside Titans territory.

Terrell Edmunds did a great job setting the Steelers up in the red zone following his interception and return of an errant Marcus Mariota throw. However, the Steelers botched that opportunity in just three plays.

Landry Jones and Justin Hunter weren’t on the same page, and Hunter was simply outmuscled on a ball in traffic, resulting in an interception by Robert Spillane.

This interception wasn’t on Jones in the slightest, but it did cost the Steelers a chance at points in a 7-0 game late in the first half.

This one was ugly for the Steelers, especially Jordan Dangerfield.

Starring at a 2nd and 19 deep in their own end, Tennessee pulled off a miracle, as Blaine Gabbert found Anthony Firkser down the seam for a 33-yard catch and run that came about due to Dangerfield overrunning the throw in hopes of getting an interception.

Instead, Firkser made a leaping grab and converted the first down, helping the Titans drive 82 yards for a touchdown, in which Firsker caught a 3-yard touchdown to cap off the drive.

Prior to this throw from Roethlisberger to Hunter, the Steelers’ first-team offense didn’t look good at all, especially Roethlisberger.

One play after firing high over a wide open Jesse James, Roethlisberger came right back and dropped a dime into the hands of Hunter streaking down the right sideline into the front corner of the end zone for the game’s opening score.

Hunter did a great job of gaining separation late on Jackson, catching up to a terrific ball from Roethlisberger before tapping both feet inbounds, giving Pittsburgh a lead it would never relinquish.