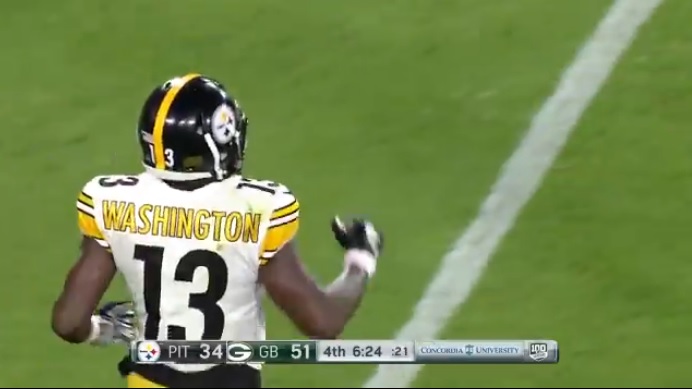 James Conner: A definite bright spot. Conner ran hard and was the offense early on. Ended the day with 5 carries for 57 yards, a spectacular 11 yard average, capped off with a 26 yard touchdown. He ran hard, stepping through ankle tackles, and showed good vision. Certainly looking like a more than competent backup runner and someone the team may be compelled to get on the field in 2 RB packages with Le’Veon Bell.

Vince Williams: Very little positive to talk about with the defense tonight. But Williams played well. Like he did last year, consistently beat the RB/FB on ILB blitzes up the B gap. Finished the day with two tackles and continues to look like the only ILB the team can trust in 2018.

Dan McCullers: Just as we talked about in camp, McCullers ran first team tonight. Either he’s really wowed by coaches or Javon Hargrave did something to really piss off Mike Tomlin (or maybe both). McCullers did play well, collapsing the pocket, though – as many others noticed – still has trouble finding the football and disengaging from blocks. Still, as he’s looked in camp, like an actual backup nose tackle.

Backup DL: Give a small kudos to the rest of the group. Lavon Hooks and L.T. Walton most notably. Held the point of attack and played the run well. It certainly wasn’t the ground game that got the Steelers killed tonight.

Tonight, Washington showed the two traits that got him drafted: vertical ability and physicality. He isn’t now but come Week 1, he’s starting in 11 personnel.

Farrington Huguenin: Couple nice pressures from the other Kentucky linebacker tonight. Showed more bend than I remember from him in the past. Not showing up on the stat sheet but a quietly good game as he looks to stick on the practice squad for a second year.

Jaylen Samuels: Got into the game in the 2nd half and he ran tough. Good pad level, turned some negative plays into positive ones, and scored his first touchdown. Didn’t dance, just got upfield and fell forward.

Marcus Tucker: He continues to shine on special teams. That’s his route to making the roster. Two tackles tonight and drew a penalty, building off doing the same thing last week.

Quarterbacks: I thought Mason Rudolph responded reasonably enough after his pick six. Ditto Josh Dobbs. But pick six’s on their first pass…EACH? Someone shoot me into the sun. That’s going to get you on this list.

Javon Hargrave: For the opposite reason as McCullers. I’m not sure what to make of the situation but running behind him isn’t a good sign, whether that’s an issue over play or something off the field. I did think he played well in the 2nd half but of course, was going against backups.

Morgan Burnett/Terrell Edmunds: Going to put both of the new, starting safeties on this list. Burnett again looked hesitant coming downhill and missed a tackle that led to a Davante Adams long catch and run. Edmunds did force and recover a fumble on a kick return but defensively, he wasn’t much more impressive. Two touchdown catches, ot be fair, the latter was a tough play to make, but he’s gotta be more aggressive playing the pocket. Also missed a tackle in space, a recurring theme for this defense as they allowed 51 points, the most they’ve EVER allowed in a preseason game.

Stephon Tuitt: Tuitt again struggled in the one area he needs to improve the most: finishing the play. His missed sack turned into a Brett Hundley touchdown. This year, Tuitt can’t put the blame on his bicep injury. Gotta finish those plays.

The ILBs: Aside from Vince Williams, this group continues to erode what little confidence there was in the beginning. Tyler Matakevich, Jon Bostic, even L.J. Fort – who I’ve talked up – struggled. If the Steelers want to solve their issues, it’s probably going to have to happen out of house.

Matthew Thomas was ok. But he’s not going to start. I don’t think.