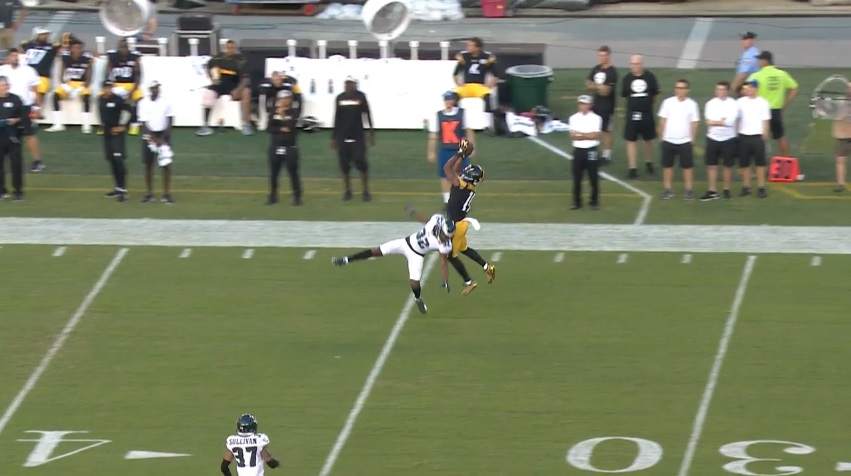 Alright folks, the Pittsburgh Steelers’ first preseason game is in the books, and the Steelers are 1-0 after defeating the Philadelphia Eagles 31-14 Thursday night at Lincoln Financial Field in Philadelphia.

While the result on the scoreboard matters very little in terms of the 2018 Steelers’ outlook moving forward, results on the field in terms of individual players carried a ton of weight Thursday night.

With the start of the 2018 season in full swing, it’s time to get back into the gear with positional grades after each Steelers game. Let’s take a look.

When not under a great deal of pressure, Landry Jones was pretty darn good Thursday night, finishing 4-for-4 on the evening for a perfect passer rating, racking up 83 yards and one touchdown for the Steelers.

Jones was sacked twice, and 71 of his passing yards came on a spectacular strike to JuJu Smith-Schuster for the game’s opening score, but overall, Jones looked good in the pocket, making quick decisions without forcing much of anything.

Behind Jones, Josh Dobbs struggled at times, processing throws late, leading to a few balls that should have been picked off to add to his one interception on the night. The second-year quarterback redeemed himself on the final drive of the first half though, as Dobbs avoided pressure in the pocket and slid to his left, uncorking a laser into the back of the end zone to Damoun Patterson for the score.

Dobbs did finish 9-for-13 for 91 yards, one touchdown and one interception, and added an 18-yard run on a perfectly executed read-option.

Rookie Mason Rudolph made his NFL debut and showed flashes at times, but again struggled with ball security, getting stripped on a sack. Fortunately, the Steelers recovered that fumble, but ball security in the pocket has been a problem for Rudolph dating back to his college days.

As a passer, Rudolph showed a solid connection with Patterson, and hooked up with collegiate teammate and fellow rookie James Washington for a 35-yard catch down the right sideline. When not looking for Washington in the jump-ball situation, Rudolph showed good poise in the pocket, taking what the defense gave him, rarely forcing any throws.

Conner ran very hard on each carry, racking up 25 yards on four carries, making a few defenders miss in the process, while also running through a number of would-be arm tackles.  Conner’s only flaw on the night was poor pass protection once again, allowing Malcolm Jenkins a free run at Jones, leading to a sack.

Toussaint came in and showed some serious burst and wiggle in the open field, forcing a number of missed tackles on his seven carries, finishing with 29 yards and a touchdown.

Ridley had arguably the best night overall of the running backs despite rushing for 14 yards on 10 carries. The veteran back ran with his hair on fire, running hard and with a sense of purpose, while also flashing as a receiver, adding 45 yards through the air on three catches. A large majority of those yards through the air came after the catch, adding another dimension to his game.

Nothing much to write home about for the rookie.

Damoun Patterson might be a diamond in the rough that the Steelers unearthed quietly. I don’t want to go over the top here, but Patterson flashed a great deal Thursday night, looking like a sleeper candidate to make the roster as a No. 5/6 receiver.

The Youngstown State product finished with six receptions for 77 yards and a touchdown on 10 targets, capping off his 29-yard score with a perfect backflip, giving JuJu Smith-Schuster a run for his money when it comes to end zone celebrations.

Speaking of JuJu, the second-year receiver put a Philadelphia cornerback on his highlight reel, going up high into the air on a broken play for a 71-yard touchdown from Landry Jones, giving the Steelers a 7-0 lead. So much for not focusing on football, eh?

Aside from JuJu and Patterson, James Washington flashed at times, recording two catches for 44 yards, including a great leaping catch over Avonte Maddox along the right sideline. However, Washington did run the wrong route on a play early in the fourth quarter, leading to a sack of Rudolph.

Marcus Tucker added two catches for 14 yards, leaving his mark mostly on special teams, while Tevin Jones had a critical drop on third down in the third quarter on an easy toss from Rudolph.

There’s not much to write home about with this group, both good and bad.

In terms of blocking, nobody really stood out in the ground game, which is neither good nor bad.

Overall, this group was very mediocre, despite the Steelers rushing for 94 yards and a touchdown in the win.

The first unit struggled to protect Landry Jones, as David DeCastro was whooped by Fletcher Cox on the second rep of the game for a sack, while Alejandro Villanueva and Matt Feiler were bowled over into Jones’s lap.

The second and third units weren’t much better, as Patrick Morris, Larson Graham, and Jake Rodgers struggled at times. Despite being an athletic center, Morris really had a hard time with reach blocks, allowing defensive linemen to get up the field quickly against him, blowing up stretch runs.

I personally thought Chukuma Okorafor looked pretty good throughout the night as both a run blocker and pass blocker. He might be progressing faster than anyone could have anticipated.

Fortunately, it’s just one preseason game, and the Steelers were without a number of starters up front. However, this unit needs to look much better in Week 2.

Javon Hargrave needs to take a big step forward this season, and Thursday was a decent start to accomplishing that. The third-year defensive tackle lived in the Eagles’ backfield at times, but he continues to struggle with disengaging from blocks in a timely fashion, allowing backs to get past him up the field into the hole he left behind.

Aside from Hargrave, nobody really stood out along the defensive line for an extended period of time, although I did see L.T. Walton come into the backfield standing straight up, making for an easy pickoff by the trapping lineman.

Daniel McCullers showed a lot of hustle Thursday night, and bulled his way into the backfield at times, but it wasn’t enough to move the needle for him when it comes to making the roster or not.

Rookie Josh Frazier was penalized on an extra point attempt for lining up over the center. Not a great look for the rookie.

Without Bud Dupree and TJ Watt, this unit looked good at times, and downright awful at others.

Jon Bostic missed a tackle in the hole on Jay Ajayi’s long run in the first quarter, while Tyler Matakevich whiffed on a stop against Corey Clement in the open field, twisting himself into a pretzel trying to get back into position. Matakevich also whiffed on a sack after coming free off the edge, allowing Nate Sudfeld to find Dallas Goedert for a touchdown.

Fortunately for Matakevich, he got better as the game went on, forcing a fumble on Wendell Smallwood, finishing with five stops in the game. Bostic finished with four, while backup inside linebacker Keith Kelsey had a strong game in the second half, recording four stops.

Undrafted free agent Matthew Thomas nearly had his first sack in the fourth quarter, but Joe Callahan was able to wiggle out of it. Aside from that flash play by Thomas, I saw a guy who didn’t trust his instincts at times, and was soft challenging offensive linemen in the hole multiple times.

Outside, Anthony Chickillo was his usual steady self, recording a sack in the first half. However, he had bad run fits at times, leading to some big gains by the Eagles. Reserve outside linebacker Ola Adeniyi really flashed in his first NFL game, recording a strip sack on Callahan in the third quarter, really working over the Eagles’  left tackles in the second half as a pass rusher.

Farrington Huguenin was rather disappointing to me Thursday night, as the second-year linebacker looked really uncomfortable in space, missing a tackle and getting turned around in pass coverage. He did flash with a big hit on a swing route to Corey Clement in the first half, but other than that really struggled.

The first unit looked pretty solid, aside from Sean Davis losing Dallas Goedert near the right sideline for a long catch from Nate Sudfield. But overall, it wasn’t a bad night for the secondary.

Yes, Dashaun Phillips got burnt by Shelton Gibson for the Eagles’ first touchdown, but he won’t factor into the Steelers much moving forward. Nat Behre, Jordan Dangerfield, Morgan Burnett, and Terrell Edmunds all flashed at times at safety, but the story of the night for the secondary was the cornerbacks.

Coty Sensabaugh baited Sudfield into a pick early in the game, while Cameron Sutton took advantage of a miscommunication between Sudfield and Bryce Treggs for an interception, giving the Steelers two interceptions on the night.

Malik Golden had a great play late in the game near the goal line, batting away a possible touchdown, but it looks like if he would have went up with two hands he’d have picked the ball off.

Jordan Berry and Matt Wile punted the ball well on the night, while Chris Boswell remained his steady self, but the units that really struggled was the kickoff coverage team.

Phillips whiffed on an open-field tackle following JuJu’s touchdown, leading to a good return by the Eagles, while the unit allowed the Eagles as a whole to average nearly 20 yards a return.

On punt coverage, the Steelers were solid, as Tucker flashed as a gunner, coming up with a big stop in the open field on the Steelers’ first punt of the game, before then downing the ball at the goal line on the second punt, pinning the Eagles deep in their own end.