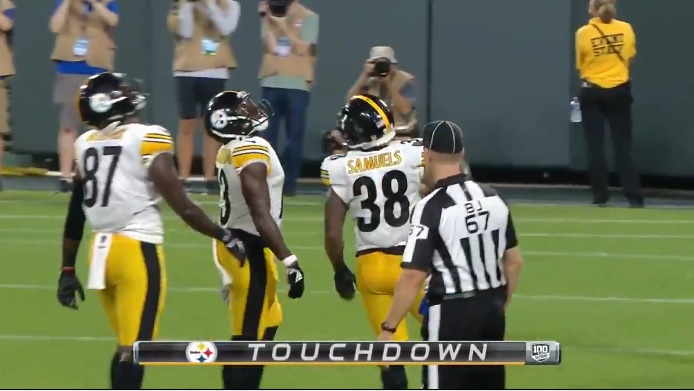 The Pittsburgh Steelers stumbled and then stumbled some more, before finally falling flat on their face, allowing the most points in a preseason contest in franchise history in a 51-34 defeat to the Green Bay Packers.

Mason Rudolph was welcomed to the National Football League immediately in tonight’s contest. In his first NFL start, Rudolph was intercepted on his first pass by Packers cornerback Tramon Williams, who took the pass to the house for a pick six. It was a shaky start at best for the former Oklahoma State quarterback, Rudolph missed several throws and lacked the poise he showed last week. The growing pains showed on the stat line as well, as Rudolph finished 5/12 with 47 yards along with one touchdown and one interception.

Along with Rudolph’s struggles, the Steelers’ defense struggled to contain the Packers offense in the first half. Aaron Rodgers led a scoring drive early, giving the Packers a 14-0 lead within the game’s first minutes. But whether it was Rodgers or backup Brett Hundley, the Steelers were unable to put a stop to the Packers offense. Plagued with more missed tackling issues and a few communication problems, the defense allowed Hundley to continue where Rodgers left off. Hundley was 6/9 for 77 yards and also contributed a rushing touchdown.

The lone saving grace of the first half for the Steelers was the cameo appearance from running back James Conner. The running back is looking to take a step up in his sophomore year and definitely made his case on the Steelers’ third possession, contributing for all of the Steelers yardage and finding his way into the endzone after a 26-yard carry. Conner finished with 57 yards on five carries. JuJu Smith-Schuster also scored his second touchdown in as many weeks, tying the game at 14 early in the first quarter, though this would be the closest the Steelers came to matching the Packers’ firepower.

Hundley and DeShone Kizer would continue pummeling the Steelers defense as Kizer put the closing touches on a dominant first half, completing a pass to tight end Robert Tonyan with rookie Terrell Edmunds in coverage, giving the Packers a 34-14 lead. This would be the second touchdown Edmunds allowed in the half, with a special teams’ forced fumble being the rookie’s only saving grace in a less than optimal performance.

Josh Dobbs relieved Rudolph in the second half and did his best impression of his quarterback competitor, throwing a pick six on his first pass attempt, giving the Packers a 41-14 lead. Dobbs would settle down, relying on rookie James Washington who once again continuing to show his physicality and big play ability. Washington showed great concentration and control, catching a touchdown pass over the shoulder of a Packers’ defender in the third quarter, this would be his one of two touchdowns on the day, finishing with 5 receptions for 114 yards. The Steelers rookie receiver has continued to impress in preseason action, showing physicality that the Steelers desperately lacked at times last season.

Saying the Steelers’ defense bled out would be an understatement, as the unit was utterly tortured and beaten like a dead horse by the Packers, allowing 22 first downs and 357  total yards. While the second and third team pieces put together a decent performance last week, the depth pieces were poor tonight with Brian Allen, Nat Berhe and much of the secondary struggling.

The Steelers will look to put their massive week two growing pains aside and rebound for their home preseason opener against the Tennessee Titans on Saturday August 25th.