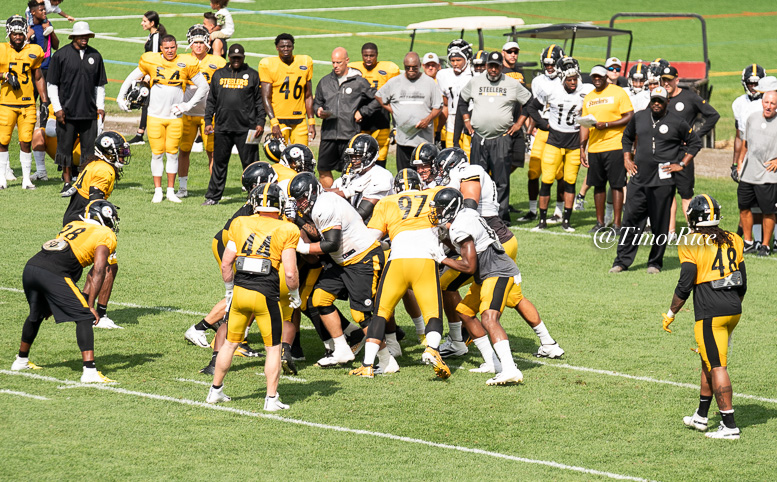 Football’s back. Come on in, put up your feet, grab some greasy food. The Pittsburgh Steelers are about to hit the field.

I know this is sorta meaningless, that’s pretty much what I’m good at, but it’s always interesting to see how the team divides up the snaps throughout the preseason. Only so many snaps for a large roster where in total, roughly 75 players will participate.

How could those snaps end up looking? We’ll chart and find everything out after the game ends but here’s my guess of how things will go.

Dobbs could jump Rudolph but if we’re being honest, we know Dobbs is on the outside looking in. Rudolph needs the reps more because if he’s opening the year as the #3, he’s not getting much work. Ben Roethlisberger will sit, as Mike Tomlin has already announced.

Obviously, for some of these positions, like running back, the reps don’t break “this” evenly. Players rotate in and I expect you’ll see some 2 RB sets during the game. But Conner will start and I expect Samuels to be 2nd in command, getting plenty of work split out as a receiver too. Jarvion Franklin will see 2nd half action at FB.

No Fitzgerald Toussaint or James Summers. Common for not every back to get offensive action in Week One. Toussaint will replace Ridley and Summers subs for Franklin next week.

Again, like RB, maybe moreso, you get less of a clean cut rotation. Put it this way. I wouldn’t play James past the 1st quarter, Grimble past halftime, and I don’t care about the rest. They can come in whatever order they like.

No Vance McDonald either. *sacrifices goat to appease the Injury Gods*

In my world and/or estimation, JuJu Smith-Schuster doesn’t play. Give that knee some extra rest that’s been bugging him. That will put Hunter as the starter next to DHB and Tucker getting much-needed reps in the slot. Lots of time for Patterson and Washington, getting a half. Tevin Jones a guy I want to get a longer look at. Quadree Henderson hasn’t been used enough in team drills for me to consider adding him, though he could see slot work very late in the game. Some gadget/quick game stuff to get the ball in his hands.

Ultimately, I decided to rest Maurkice Pouncey and Alejandro Villanueva for this one while Ramon Foster remains injured. Considered playing Villanueva, talked about that on the podcast recently, but with that right shoulder giving him some trouble, it’s better to limit some of his reps. He can get two series next week and a half in the third game. Because of that, kept DeCastro and Gilbert to give Landry Jones some sort of protection.

Want to give Okorafor and Rodgers time at both spots. Maybe Feiler plays RT next week to get him around. The reserve linemen don’t often come in until very late. Sorry Schleuger, Graham, and Meadows. Thems the breaks.

Wouldn’t play Cam Heyward or Stephon Tuitt. Want those guys healthy. With only 3 NTs and Hargrave being young, he gets a couple of reps. Also don’t need to see much from Alualu. With 12 DL on the roster, you can get these guys out of the game pretty quickly.

McCullers and Frazier play nearly a half. Like the OL, guys like Cothren, Gilmore, and Vickers are only going to get 8-12 snaps when you consider all the sub-package snaps that’ll be used.

This one gets a little messy. Maybe Huguenin should play the entire half but I want an extended look at Adams. There will end up being a rotation anyway, especially since there’s – at best – four healthy OLBs on this roster. Matthew Thomas will see time on the edge if Adams doesn’t give it a go.

Dave and I discussed it on the podcast. Let Bostic and Matakevich play together. Bostic can play the Buck. I don’t need to see much from Vince Williams. Lots of snaps for Thomas, not as many for Galambos. 7 ILBs on the roster creates an odd man out.

I’d play all the starters here except Joe Haden, who gets the day off due to his age (he’ll play next week and was limited with an injury that cost him a couple days of practice). The rest need some time communicating together. Maybe Edmunds can get a drive or two in the second half but that’s a good enough look for a debut. Suttton getting work at two CB spots after playing all three in practice. Shuttles Reaves to just 4th quarter duty. Phillips deserves a long look in the slot, too.

Henderson has already been announced. We’ll see if Cam Sutton gets any work here.