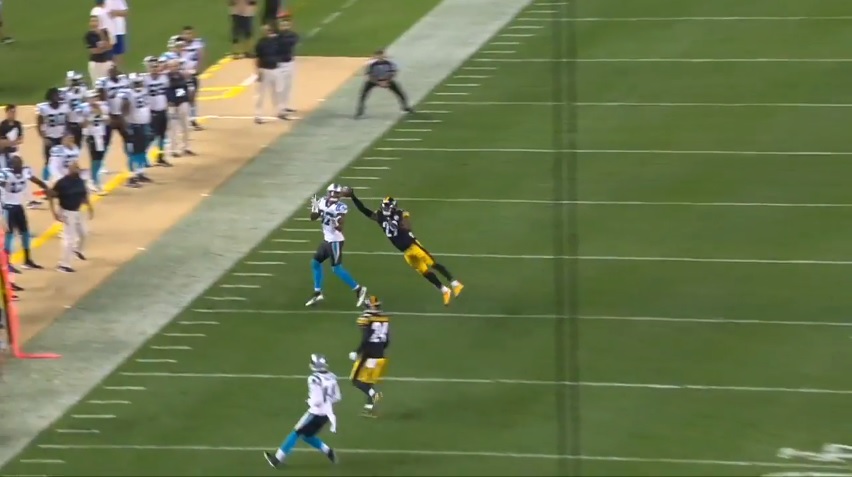 I made the trek to Pittsburgh for the last preseason game of 2018 against the Carolina Panthers. On the way to the game, a lady saw my Pittsburgh Steelers gear and asked if I was going to the game. She gave me two tickets, said she had been in a recent accident and requested for me to pass them on. I promised to give them to someone and ended up leaving them at the will call window for a person who claimed they were going to their first game. My prayers go out to this stranger who just wanted to make sure her tickets did not go unused. Just a brief vignette from the Steelers Nation experience.

Matthew Marczi listed What to Watch For in this 4th preseason game. So far, I’ve watched the game live, followed my twitter feed but have done little else to digest what I saw during this final preseason game. Joshua Dobbs looked sharp tonight. He had an opportunity and looked determined to show he belonged in the NFL. He completed eight passes in twelve attempts for 151 yards and a touchdown. He also scored a touchdown by leaping into the endzone to cap the first drive. Good show, Josh!

I was surprised when Mason Rudolph came in with less than two minutes left in the first half. I later learned that Mike Tomlin planned to insert the rookie quarterback if the opportunity to execute a two-minute drill arose. Rudolph completed a 24-yard pass to Tevin Jones and punctuated the score with a two-point conversion. The referees penalized Rudolph for taunting but during the replay in the stadium it looked like a Panther defender shoved him. I’ll have to check that out once I watch the game again. Rudolph threw another touchdown pass to Quadree Henderson in the second half, but it was an awkward pass thrown off balance while running in the opposite direction. Nice one-hander by Henderson who fell backwards but managed to keep possession of the ball. Rudolph completed just five passes in nine attempts but some of those incompletions may have been drops. He did average over 20 yards a completion.

Jaylen Samuels started at running back last night but did not do much. Stevan Ridley came in and gave a spark to the running game. He also had a chance to do some pass protection. He looked like the best running back of the four that appeared. Fitzgerald Toussaint was in the game briefly and Jarvion Franklin closed out the game including punching in a touchdown from the one after Matthew Thomas defected a pass, caught it and ran to the one-yard line.

Tevin Jones really stepped up at wide receiver. He did drop at least one ball but his three catches for 90 yards and two touchdowns was a great night. He clearly outperformed Damoun Patterson who did not catch either of the two passes thrown his way. The best catch of the night was Justin Hunter reaching back to snag the ball from nearby defenders. Reminiscent of of James Washington’s signature move. He did not play tonight, resting that strained oblique muscle with a roster spot already earned.

The offensive line did a decent job. Zach Banner was over at right tackle and Chuks Okorafor on the left. Jake Rodgers was in too, but he may be the also-ran. The other two seem to have the potential to dominate the line of scrimmage with tutelage from Mike Munchak.

I am a bit concerned about the Steelers defensive line depth. Big Dan McCullers dressed for success but did not impress. I saw him standing tall and a double team pushed him off the line. Joshua Frazier and Lavon Hooks played but were not noticeable. Javon Hargrave played more than expected and got snaps in the second half. He did not dominate against the Panther’s reserves. The Panther quarterbacks went long stretches with no pressure especially in the first half. The defensive line needs to penetrate more on passing plays.

The linebacker play was exciting. Thomas had the previously mentioned interception then gave us a scare when he went down, but sure it was just a cramp as I watched a trainer working his foot. He came back into the game. Ola Adeniyi looked good, but he banged himself up during the game. Keion Adams and L.J. Fort were highly active. All these guys made Mike Tomlin’s decision a little harder for cutdown day. Tyler Matakevich did not appear to be as strong as these others, but he did make some tackles.

Brian Allen had one series where he had tipped a ball away from a receiver and then prevented a first down with a nice tackle. He did go for an interception that he missed on letting the receiver get away later in the game but overall a strong game. Coty Sensabaugh played but not sure if Carolina threw many passes in his direction. Marcus Allen also had some tackles and forced a fumble that the Panthers recovered in the endzone. I really thought Farrington Huguenin was going to recover it but just a moment hesitation and the Carolina receiver was able to secure it.

Ryan Switzer didn’t do anything spectacular on his two kick returns or one punt return, but he does look like he could break one. What caught my attention on special teams was the punters. Matt Wile was booming the ball with enough hang time to prevent a return. Jordan Berry did have a short field for his only kick; but I must wonder if there might not be a change at this position.

There were three penalties that I did not understand. The first two were the roughing the passer penalties that extended a Steelers drive. Both appeared clean to me, and the crowd was not cheering when the referees threw the flag and awarded first downs. The third questionable penalty was lowering the helmet and if I heard the referee right, hitting the runner after the play was dead. Eye witnesses are usually not the most credible when describing a crime, but I swear a referee threw the flag before whistling the play dead. It also bothered me that the runner lowered his head and was to the ground when the Pittsburgh defender came in for the tackle and did not appear to make contact using the crown of his helmet. I screamed at the referees ineffectually after that call.

All this said, it was a very enjoyable game to watch. The players were hungry and executed very well. It reminded me of watching minor league baseball where every batter runs out the ball to first even if they’ll be an easy out. Most of the players out there knew their job was on the line.

So, for Friday, I must rewatch the game on the television and catch up on all the Steelers Depot articles. Also, will listen to the Terrible Podcast so that I can see how the first-hand observations of an average Steelers fan stack up against the experts like Dave Bryan & David Todd, Alex Kozora and Matt Marczi et al. Soon Saturday will be upon us and we shall learn who made it onto the first 53-man roster and the practice squad.

Well, that’s all for now. In the 2018 Memorial Day Weekend: Steelers Friday Night Five Questions, I committed to play songs that Steelers Depot respondents had suggested might be the new Steelers anthem if Renegade by Styx was ever replaced. Here is entry 14 of 45 from Chris 92021 & LucasY59 who double down with: Renegade by Styx.