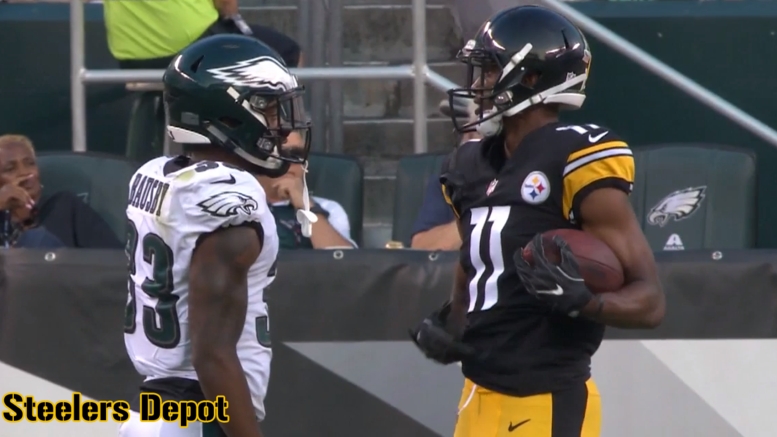 Veteran wide receiver Justin Hunter only played eight snaps for the Pittsburgh Steelers on Thursday against the Philadelphia Eagles in their preseason opener. That can’t be a good thing for him—or is it?

The sixth-year veteran, now in his second season with the team, has spent quite a bit of the offseason running with the first-team offense, or at least with the second group. Is it already taken as such a given that he has a place on the team that the coaching staff is simply more concerned with getting long looks at other guys and not so much in getting results from Hunter inside of stadiums?

We all know that Hunter has been a career superstar in practice. The issue has always been being able to take advantage of his natural gifts within the context of an actual game, rather than in individual drills in which he can rely more on his size.

I do find it curious that Hunter played so little. I also have a difficult time not reading into it. While I’m sure that he will received more playing time in other games as we move deeper into the preseason, I can’t help but wonder that it all means about the team’s current evaluation of him.

With Antonio Brown absent, it was actually JuJu Smith-Schuster and Darrius Heyward-Bey who opened up the game against the Eagles as the top two receiving options, but Hunter was brought in as the number three to work alongside them—their three tallest wide receivers, if I’m not mistaken, at least at the top half of the depth chart.

He only participated in the first four drives of the game, I believe, all three of them short, and the first three quarterbacked by Landry Jones. His only target came on the final play of the fourth possession, on which Joshua Dobbs threw short of the chains on third and seven, resulting in a four-yard catch.

What he did exhibit on his other snaps, at least, was a willingness to block, even if he had mixed results in doing so. He threw a couple of chip blocks in the run game, but had at least one solid block of a more traditional variety as well.

Following the fourth drive, the ‘starters’ left the game and were replaced by the likes of Damoun Patterson and Marcus Tucker. Now, obviously these are younger players that they need to get more of a feel for than a sixth-year veteran in the league, but is eight snaps with one target really enough for Hunter?

At the end of the day, of course, the team is not going to ask too much of him, or at least one would hope. Brown, Smith-Schuster, and rookie James Washington should be at the top of the depth chart, and Hunter would be fighting with Eli Rogers, most likely, to be the number four target.