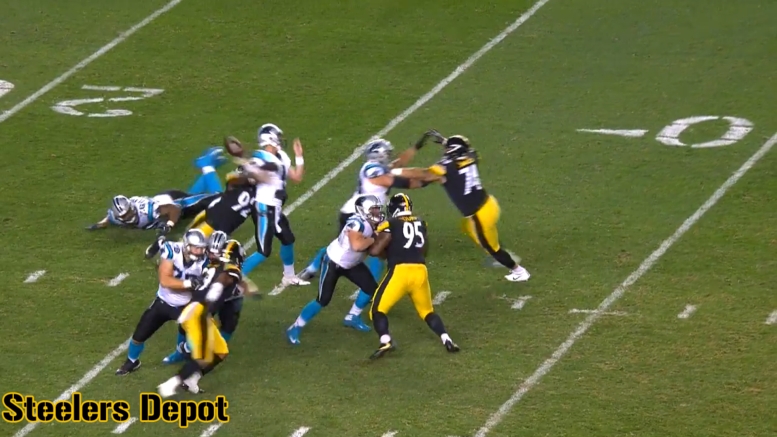 Can you name the last time that a Pittsburgh Steelers defensive player recorded three sacks in a single preseason?

This stat trivia is actually not impressive at all. Arthur Moats recorded three sacks against the New York Giants in the opening week of the preseason just last year. But regardless of that, rookie outside linebacker Olasunkanmi Adeniyi’s three sacks he recorded over four preseason games in 2018 represents an impressive body of work.

Adeniyi (who I once again humblebraggingly point out was part of my one mock draft back in April in the seventh round for the Steelers) led the team in sacks this preseason, with two of them resulting in forced fumbles. He has at times looked like the last player to wear the number 92 jersey, James Harrison.

The Toledo product has recorded nine total tackles this preseason, registering three sacks and two forced fumbles. He has shown some hints at advanced concepts in defense, both in terms of having a pass-rushing repertoire and a plan for counters, and with respect to being able to play against the run.

The Steelers’ young pass-rushers have been afforded a lot of opportunities over the course of these four games. Starter T.J. Watt missed the entirety of the preseason and the vast majority of training camp. Bud Dupree also missed a lot of time. Adeniyi has done more with those snaps than anybody else, including Anthony Chickillo.

What remains to be seen, however, is whether or not he actually makes the team, and that was complicated by the fact that he suffered a hamstring injury and left tonight’s game. There is not a lot of clarity right now on the severity of the injury, but it could cause him to be a vulnerability.

Aside from that, while the team has fed him a significant amount of work on special teams, he has not necessarily done a lot in that work. It’s unclear how the Steelers and Danny Smith view him in terms of his ability to contribute in that area.

My best guess is that he does make the team, but does so as the number five outside linebacker behind second-year Keion Adams, who has also looked good even though he did not record any sacks. He likely will be a gameday inactive to start the year.

If the team really wanted to be bold, they could entertain the idea of parting ways with Chickillo, but my guess is that they value him too much as a special-teams player (and for his ability to play either side of the field) to do that.