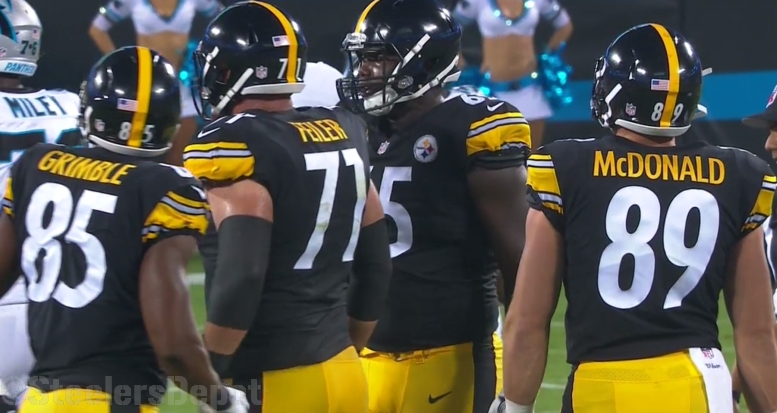 “I don’t have a plan right now”, Pittsburgh Steelers Head Coach Mike Tomlin said when he was asked about the immediate future of the tight end position that currently features two of its top three players sidelined with injuries that appear to be more week-to-week than day-to-day.

“I don’t have a plan right now in terms of if you are asking in regard to game or preseason reps”, was the complete first sentence of his response, but the first seven words would suffice for most people right now. “I am not focused on that really”, he went on.

The Steelers are without their top tight end, and have been for almost all of training camp, after Vance McDonald suffered a foot injury early on in the proceedings. It remains unclear when he might actually return to the field, though he said that he hoped to be ready for the start of the regular season.

Another player who hopes to be ready to resume activities by the time that the meaningful games roll around is Xavier Grimble, the third-year tight end who has been holding on to that number three role on the depth chart. He had a minor procedure performed for a hand injury.

With those two out, the participants working behind Jesse James are a veritable list of who’s that?, rather than who’s who. Perhaps the most well-known name is also the most recent, that being Bucky Hodges, who was a late-round draft pick in 2017. Pharoah McKever has been the most notable of the group so far as an undrafted rookie. Christian Scotland-Williamson, a rugby player making the transition to football, still looks much as that descriptor would imply.

”It’s just those that are available or working and developing skills relative to their position”, Tomlin continued in his response with respect to the current state of the tight end position. “We are very much still in training camp mentality at that position and all positions”.

Given that the team is out of training camp and preparing to participate in its third preseason game, I can’t help but find myself a mite concerned. Frankly, I don’t anticipate changing my mind about any of the three players previously named and suddenly considering them worthy of a spot on the 53-man roster, though McKever would be the closest since he at least displays the willingness to block.

The Steelers might want to consider keeping their eyes and ears open around the league for what tight ends might be or become available in the near future if injuries continue to be an issue at the position.

But we must also be measured. After all, provided that McDonald and Grimble return from their injuries ready to participate in the regular season, then there wouldn’t be any issues. It is the same group of players that they had last year. Not that it can’t be upgraded. But in the meantime, they are not finding any Jake McGees in the current group.