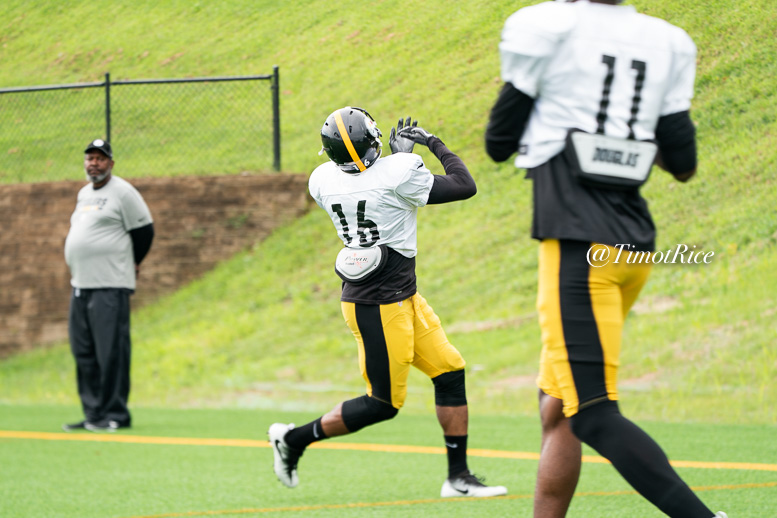 You may have noticed that a week went by for the five time in the five-plus years that I’ve been on this site in which I didn’t write anything. I was in Germany, enjoying the sights in Berlin and Dresden, an interesting experience for sure, but I am back in time for tonight’s first preseason game for the Pittsburgh Steelers against the Philadelphia Eagles, so I’d like to squeeze in my first 53-man roster prediction before then.

Analysis: I’m sure he’s going to play a lot this preseason, but I have a hard time imagining based on what we’ve seen from training camp that Joshua Dobbs will play well enough to keep his job, or that Rudolph would be advanced enough to allow the team to be comfortable moving on from Jones.

Analysis: Assuming that Eli Rogers begins the regular season on the Physically Unable to Perform List, it would seem likely that the running back position will benefit. Bot Samuels and Ridley seem to have a good chance to make the roster for the time being, in part due to injuries limiting numbers elsewhere.

Analysis: This is pretty moot until they ever actually bring in another fullback or roster spots start becoming scarce.

Analysis: As with Alex Kozora, who so far I’ve entirely agreed with on our 53-man roster predictions, Rogers’ PUP status likely means the team will start the season with five wide receivers. For the time being, the number four receiver appears to be Hunter.

Analysis: Things might be different here if Jake McGee were not injured back in the spring and Ryan Malleck evidently injured while I was away, but there really isn’t much competition at all at the tight end position.

Analysis: As of right now, it’s hard to envision the Steelers carrying more than eight offensive linemen on the roster, especially with the team giving Feiler more tackle snaps again. Depending upon Okorafor’s readiness, Feiler could be a gameday active.

Analysis: I’m finally diverging from Alex here and going with the rookie Frazier over veteran Daniel McCullers, even though he has supposedly had a nice camp so far. At least until I see it in games, I’m hesitant to back him after four years of the same-old, same-old.

Analysis: In doing this list, I realize that there are more roster spots to throw around than I expected. Coming into the spring, it wouldn’t have surprised me to see as few as eight linebackers on the roster, but there are openings, and that will help Thomas. Fort was a core special teams player last year, seeing among the most snaps.

Analysis: The Steelers have kept a fifth outside linebacker with limited special teams contributions before if he has flashed as a pass rusher (see Adrian Robinson), and with room available, Adeniyi benefits.

Analysis: The name that gets left off here is obviously Coty Sensabaugh, who struggled last season but has had a good camp. The problem for him is that Sutton is ahead of him as the number four cornerback. They also want to continue developing Allen. They could opt to keep a sixth cornerback over a fourth running back or 10th linebacker.

Analysis: Edmunds has looked as though he can be a day-one contributor, which could possibly make Berhe’s job a bit more vulnerable, but it should be easily enough for him to earn that spot in the preseason with his special teams work. At least until we see more from Marcus Allen—which could change tonight—I’m going to give a slight nod to the veteran here.

Analysis: He likely gets a new deal by the time he kicks off in the season opener.

Analysis: It’s a pretty big season for Berry, but his job is not in jeopardy. A contract year up, he can solidify himself as a credible franchise punter this year.

Analysis: Assuming Dobbs clears waivers, the team probably tries to carry him on the practice squad. With Rogers on the PUP List, the team keeps two receivers, including the tall Patterson. Allen is another who could be vulnerable to a waiver claim. I defer to Alex on Morris and Kelsey in training camp until I see them play.