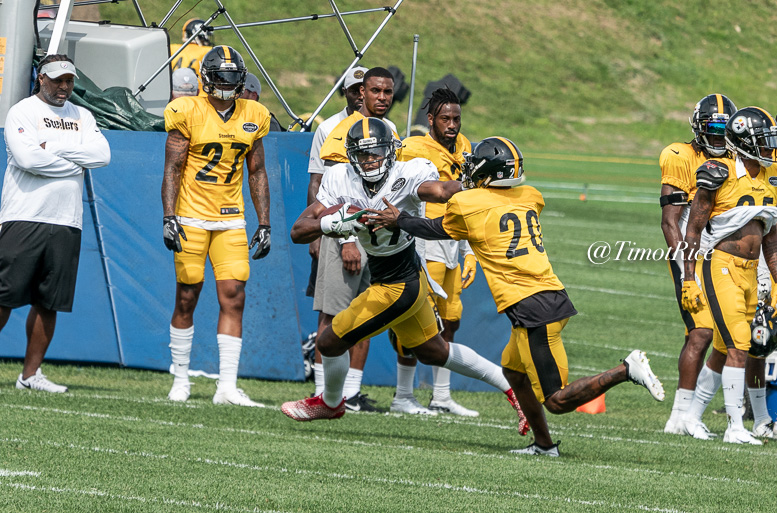 A little more information this time around, the Pittsburgh Steelers wrapping up all 15 practices and concluding their first preseason game a week ago. Still plenty of time left for things to change but here’s my current guess at the roster and practice squad.

Analysis: Feel more and more confident this will be the group and the order. Josh Dobbs simply hasn’t done enough to justify keeping him over Jones on the 53.

Analysis: You could argue Fitzgerald Toussaint and like I said on the final camp podcast, it’s an issue of valuation. Ridley clearly the better runner, Toussaint clearly the better special teamer (and the team doesn’t seem to be interested in giving Ridley any KR work). I’m sticking with Ridley for now but it’s actually one of the tougher questions I’m debating right now.

Analysis: Because of course Nix is going to make it.

Analysis: I’m not going to make any changes here…yet. Still expect Eli Rogers to begin the year on PUP. Feel Marcus Tucker has a better shot than Damoun Patterson on the 53 but if you can get both/either on the practice squad, I can see this team sticking with Hunter, who they like, for better or worse.

Analysis: Certainly no one else on the roster will push for a roster spot. Now you just hope for good news for McDonald and Grimble on the health front.

Analysis: Pretty confident these are the eight and it’s only eight, unless they go outside the organization. Enough versatility in the backups. Finney can play any interior spot, Feiler can play either guard and right tackle (maybe center too), and Okorafor either tackle spot. That’s enough to deal with any injury.

Analysis: I’m not sure how much of a debate there is at this point. Joshua Frazier feels like a guy ticketed for the practice squad unless he really turns heads in the near future. No one else is making a push. McCullers has sincerely improved.

Analysis: Thomas has enough intrigue with his athleticism and the Steelers seem interested in his pass rush ability. He might not be active right away but a good stash candidate to give them some quality depth.

Analysis: Adeniyi sticks around after a strong performance against the Eagles. Let’s hope he keeps it up.

Analysis: My one change to my 53 man roster. I think the Steelers will subscribe to the idea of “you can’t have too many quality corners” and Sensabaugh looks more comfortable his second year as a Steeler. Some of the injury issues at safety makes this an easier decision, too.

Analysis: Marcus Allen needs to get healthy. I’m just speculating here but I have a funny feeling this is one of those eventual IR decisions, a la Keion Adams last year. I like Matthew Marczi’s idea of Jordan Dangerfield but don’t love it enough to copy it. Can’t keep 11 DBs and 10 LBs…numbers just don’t work out.

Analysis: Dobbs sticks around like I’ve written about before. Patterson definitely making at least the practice squad and Tucker lands here again, assuming he’s still eligible. Mixing up the OL a little bit with R.J. Prince, who Mike Munchak talked about. Like his size and feet with some guard/tackle versatility. Frazier and Allen are easy practice squad decisions though Malik Golden becomes a hard-luck loser as the odd man out. Could argue keeping him over Phillips.