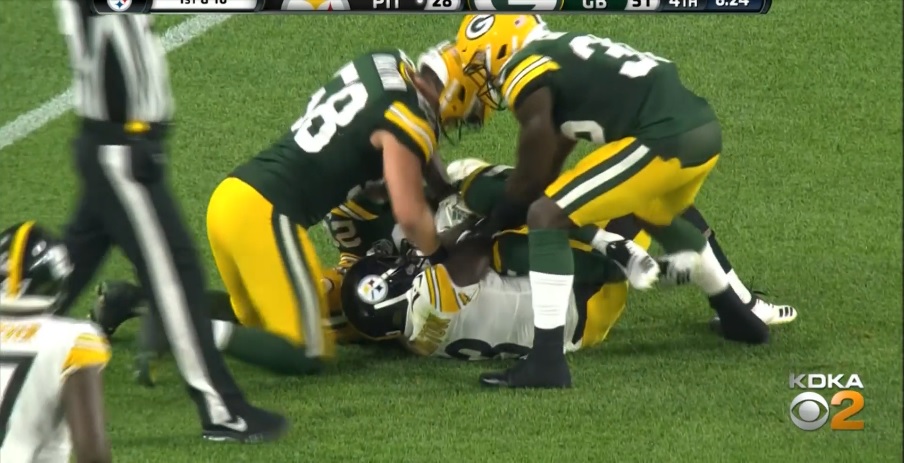 Rookie wide receiver James Washington says he’s having a lot of fun out there. Steelers Nation is having a lot of fun watching him. Washington dazzled in Green Bay last night, catching five passes for 114 yards and a pair of scores. Both touchdowns were 50/50 jump balls, lobs thrown up by Josh Dobbs to give Washington a chance to make the play. He did. Both times.

After the game, Washington explained to reporters the key to winning those types of plays.

“50/50 balls is just a time to show your aggression and to show how much you want to play.”

Washington isn’t blessed physically with height or speed, in fact, he’s pretty average in both, but showed off a 39 inch vertical at his Pro Day that has translated on some of these plays. His long arms, strong hand, and plain want-to has made him an excellent combative catcher.

As Mike Tomlin noted last night, this isn’t anything new from Washington. Attend virtually any training camp practice and you’d witness him making two or three of these catches a day. He only got better as camp went on, as our numbers indicate.

“Concentration, focus, just how much you compete,” Washington went on to explain. “That’s basically all it is.”

He has a pretty good mentor to look up to when it comes to receivers who simply outwork everyone else too. Washington said he pays close attention to Antonio Brown during practice.

“I watch him every day. Everytime he gets a rep, my eyes are on him. Just studying him each and every day, picking his brain. Just trying to become a better receiver.”

Though Tomlin didn’t commit to starting Washington in next week’s tune-up game versus the Tennessee Titans, you have to think Washington will get the nod. He’s starting, much sooner rather than later, and needs all the time with Ben Roethlisberger he can get.