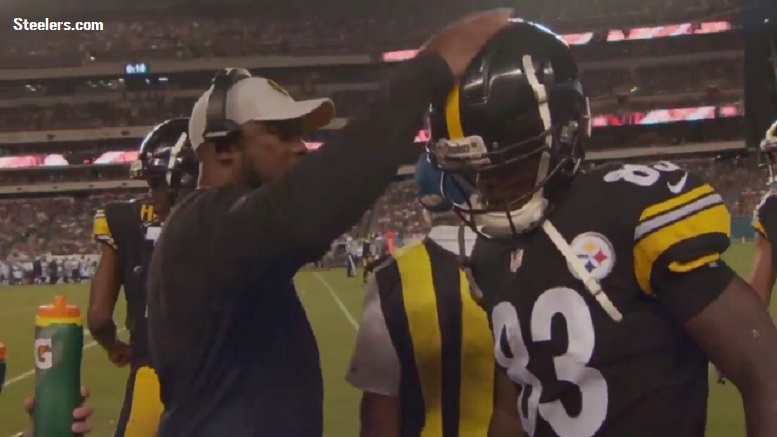 Ahead of the Pittsburgh Steelers second preseason game of 2018 its hard to not be excited about the potential of us seeing young wide receivers James Washington and Damoun Patterson play quite extensively against the Green Bay Packers and especially with the fact that both players represented themselves well in last week’s exhibition opener against the Philadelphia Eagles.

During his Tuesday press conference, Steelers head coach Mike Tomlin was asked about one of those two young wide receivers, Patterson, a rookie undrafted free agent out of Youngstown State, and specifically, if he’s looking forward to seeing if the player can build on his first preseason game performance.

“It’s safe to say you could characterize that as a positive first performance,” Tomlin said of Patterson, who caught 6 passes for 77 yards and touchdown in the preseason opener against the Eagles. “Let’s see if he can build upon the positive aspects of that performance. There’s some negative within that performance that I’m sure we’re not discussing – see if we can minimize that. He is just an example. All of those guys that played in that game have aspects of their play that fall into those categories and those are the ways that we’re challenging them as we step into the second stadium.”

Due to the strong showings of Washington, the team’s second-round draft pick this year, and Patterson, so far this summer, Tomlin was asked Tuesday, if he is currently pitting the two young receivers against each other using his own ‘two dogs, one bone’ philosophy like he did way back when wide receivers Antonio Brown and now former Steeler Emmanuel Sanders were both rookies.

“You know, that’ll be determined if they both make it, if they continue to ascend,” Tomlin said. “I think the AB and Emmanuel Sanders story is only interesting because they became AB and Emmanuel. There’s been other aspects of that, you know. There’s Cortez Allen and Curtis Brown, you guys don’t ask me about that, two dogs, one bone. So, we’ll see.”

Washington, for what’s worth, has reportedly had a solid week of training camp practice this week after registering 2 receptions for 44 yards in the Steelers preseason opener. Obviously, he’s going to make the 53-man roster this year and now the only question is whether or not Patterson will as well. Tomlin might have a weekly battle for a game day helmet to start the season should Patterson ultimately make the initial 53 just like he did way back in 2010 Brown and Sanders, both of whom were draft picks that year.

While it’s yet to be seen what the Steelers wide receiver rotation will ultimately look like Thursday night against the Packers, there’s probably a decent chance that Washington and Patterson both wind up starting that contest along with fellow young wide receiver JuJu Smith-Schuster, if he’s healthy enough to play. After all, Tomlin said Tuesday that the focus Thursday night against Green Bay will be on the young quarterbacks as Joshua Dobbs and Mason Rudolph will play exclusively in that contest. With that being his approach at that particular position, it would make sense to let Washington and Patterson play exclusively in the first half of that contest as well.

“You know, a lot of those guys, you had thoughts about maybe what they’re capable of, you’ve seen evidence of it out here [in training camp], but until you step into a stadium and you’re playing football with all the moving parts and variables that occurred in stadium, you don’t know,” Tomlin said Tuesday. “So, it is a big opportunity to build and to accentuate the positive and work to minimize things that weren’t.”