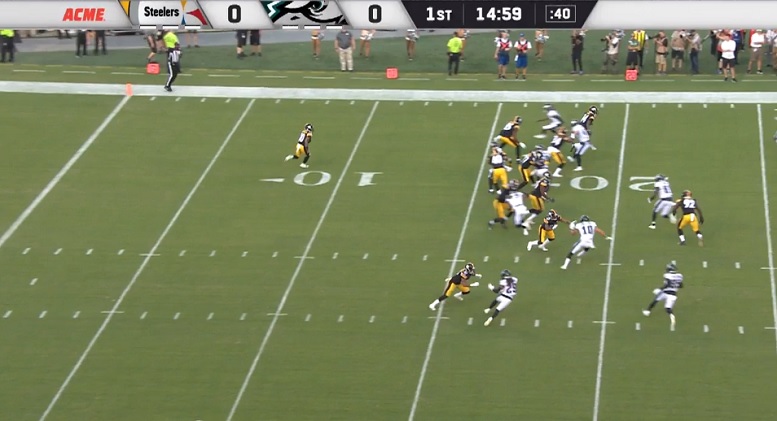 If Pittsburgh Steelers rookie wide receiver Quadree Henderson indeed did have quite a few friends and family members at Thursday nights preseason game against the Philadelphia Eagles to watch him make his NFL debut, they certainly didn’t get to see the Wilmington, Delaware native do much of anything throughout the contest.

Even though Henderson, who was signed this year as an undrafted free agent out of Pittsburgh, was the Steelers starting kickoff and punt returner Thursday night in Philadelphia, the diminutive wide receiver only managed to run with the football once during the game and that happened right at the start of it.

After fielding the opening kickoff from Eagles kicker Jake Elliot a yard deep in the Steelers end zone, Henderson ran to and up the left side of the field and was ultimately tackled at the 16-yard-line. That would ultimately be his first and last return of the game, however.

With 6:11 left in the first quarter, Henderson decided to fair catch a punt front Eagles punter Cameron Johnston at the Steelers 12-yard-line. The next time Henderson was on the field, Johnston punted the football out of bounds to his left and thus Henderson was denied an opportunity to return the 37-yard effort that was marked as crossing the sideline at the Steelers 15.

In the second quarter, Henderson was once again on the field to receive another kickoff from Elliot but this time the Eagles kicker booted the football out of the back of the end zone for a touchback. With just under two minutes remaining in the first half, the Eagles kicked off to the Steelers a third time and this time the Elliot effort was fielded five yards deep in the end zone by Henderson, who then proceeded to kneel for another touchback.

What’s perhaps the most interesting thing about that final kickoff that Henderson received is the fact that no Eagles defender had reached the Steelers 25-yard-line by the time he had fielded the football in the end zone. Maybe he was told to take the touchback if he had to field the football that deep. We’ll perhaps never know for sure, however.

In the second half of the preseason opener, fellow Steelers wide receiver Justin Thomas relieved Henderson as the team’s return man. While the Eagles wouldn’t kickoff again during the second half, they did punt three more times and Thomas returned all three for a total of 12 yards with a long of 8 yards.

While Thomas ultimately played 3 offensive snaps late in the Thursday night preseason opener, Henderson failed to register any so he went in the books with just 5 special teams snaps in total. It’s going to be hard for Henderson to make the Steelers 53-man roster if he only averages one return a game and fails to see the field any on offense to boot. We’ll watch closely this coming Thursday night to see if he’s able to generate a few more returns in the Steelers second preseason game against the Green Bay Packers.