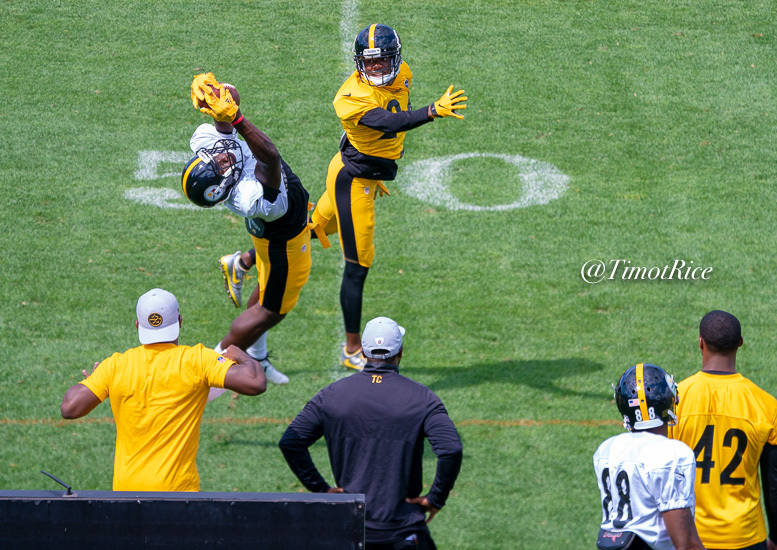 For the rest of the preseason, we’ll give a recap, position-by-position, player-by-player of what I saw during the 2018 Pittsburgh Steelers training camp and preseason games. Now, the receivers.

Antonio Brown: It was a little disappointing not to see him out there for about a week’s worth of practices after his quad injury. The Steelers were predictably cautious with him and upon his return, he looked like the same old dominant AB we know and love. He’s responsible for one of the most incredible catches of training camp, an absurd left-handed snag on a 50 yard completion down the left sideline in double-coverage. And you daily saw videos of him killing DBs one-on-one. Not much you need to say or know about Brown, the best receiver on Planet Earth.

James Washington: Washington got off to a slow-ish start, losing out on several contested throws to Coty Sensabaugh, who legitimately got the best of him the first five practices. From there, Washington is NBA Jam hot, rarely losing out on a jump ball. The stats prove it too, his catch percentage increasing dramatically the first 5 practices (42%) to the last five (80%). He might have the second-strongest hands on the team behind AB and has shown to be a vertical threat even without 4.4 speed.

Washington is moving around the formation, still best, and will be, the “Z” receiver, but he’s gaining comfort in the slot and as the X. Important he can move around the formation. If he can’t move, that means others can’t either, and makes your offense too predictable.

In all, an excellent camp. And I fully expect Washington to be the starter in 11 personnel Week One versus Cleveland.

JuJu Smith-Schuster: For about 48 hours, everyone made JuJu out to be the bad guy. The dude too focused on Fornite, Snapchat, and not football. Couldn’t be further from the truth. Yes, there were some rough patches and he had one legitimately bad practice, I’m guessing a nagging knee injury wasn’t helping his focus, but beyond that, Smith-Schuster looks like a guy ready to repeat, and improve, his rookie success.

Smith-Schuster looks more comfortable on the outside even if he’s still ideally a slot receiver. Strong hands, great at the catch point, and he’s made big plays in the preseason that squashed all concerns about his “readiness.” He’s more than prepared.

Roosevelt Nix: Obviously, not a receiver but I keep forgetting to include him with the backs (I’m so sorry). Nix got involved in the offense early, catching all six of his team drill passes in the first five practices and then being blanketed for the next ten. He was the first-team FB, of course, and I felt like the team was actually careful with his reps, not wanting to risk injury with him being the only fullback on the roster. Brings a dynamic that can’t be replaced based on what the Steelers currently have. During yesterday’s practice, I saw him get a snap as the lone back, but that’s been limited. Nix is his same old, lovable, skull-cracking self.

Damoun Patterson: A darling early on, the attention has shifted to James Washington. Rightfully so. Washington is going to make an impact for the offense and hopefully a significant one at that. Patterson won’t. That isn’t to say he’s a bad player. He’s an exciting one teeming with big play potential. What he did against the Eagles was memorable and correctly had fans excited.

But like most UDFA rookies, he’s terribly inconsistent who drops too many passes and has a lot to learn about the details of the position. To work on his route running, selling routes, getting on corner’s toes and opening their hips to create space. A feast or famine player in camp, catching only 18 of 41 targets, the lowest catch percentage by any WR on the roster.

Conversations about him making the 53 ended about as quickly as it began, I never put him on my roster and barely even considered it, but he’s a great stash candidate on the practice squad for the year.

Marcus Tucker: From quiet beginnings, Tucker moved the needle by the end of camp. I know it wasn’t part of camp practices but one of his best days as a receiver came last night, catching three touchdowns, all three of them impressive catches against tight coverage (two on Brian Allen). He’s also been impressive on special teams, which is essentially more important than what he does as a receiver. Tucker’s also gotten more work in the slot than ever before and looks relatively comfortable there.

Missing several practices with a right ankle injury tripped him up, literally, but Tucker is crossing the finish line full speed ahead. Still has a chance to make the 53 man roster.

Darrius Heyward-Bey: Hey-Bey is who he is. Nothing I write here will blow your mind or change your perception. The speed is still there. So are the questionable hands. No one body catches quite like him. Blocking is still top notch as well, evident on James Conner’s first long run against Green Bay Thursday. DHB is versatile, a leader in that room, and strong special teamer. His catch percentage was up from an abysmal 2017 camp, finishing a shade under 50%, which is still bad relatively speaking.

He’ll make the team for all those reasons but if he has to see the field offensively, aside from the one-off deep ball, the Steelers are worse off for it.

Justin Hunter: Hunter is a player who you always come away feeling “meh.” There’s no one who looks so good in one-on-ones and catching on-air and just so…blah, in everything else. Hunter ran with the starters for most of camp given his tenure in the league and on the team and the Steelers still seem to like him a lot. He can still get vertical and flash enough of impressive catches to make you hold onto him and hope he figures it out.

Hunter, at least, early in camp, saw some reps in the slot, something he did quite a bit in his one year at Buffalo. That helps expand his versatility a tiny bit. But of course, the elephant in the room is a total lack of special teams value. If he makes the roster, it’s by default, where no one else deserves to push him off.

Trey Griffey: One of the reserve receivers who ended things better than how he started. Quiet early on, just not involved in team drills. Four receptions the first five practices. 12 over the next ten. Still not great but he made some plays vertically and his size is certainly an asset. Haven’t been convinced he an separate and odds to even make the practice squad are tough given the competition but he impressed me enough down the stretch.

Tevin Jones: Jones is the reverse of Griffey. A guy who made a little bit of noise early on, getting more reps, showing slot capability, and then faded down the stretch. Working in the slot, he saw plenty of targets, especially with the injuries to JuJu and Tucker, but caught only half of them. He’s strong with decent body control and a good pair of hands but isn’t as dynamic as he tested and won’t create any space in the slot. He, like some of the other new faces at receiver, have done well on special teams, I’ll give the group that much. But not a guy I see hanging around after cutdowns.

Justin Thomas: A diminutive former QB, Thomas surprised by playing nearly exclusively on the outside as the “X” receiver. Thomas got a decent amount of reps for the spot he was in but was rarely targeted and didn’t make many plays as a receiver. Only 10 catches despite being healthy and active for all 15 practices. Thomas has gotten work as a punt returner but struggled against the Eagles, too hesitant and not going anywhere. He does field the ball cleanly and looks like a fluid player but I can’t see him hanging around the practice squad for the second year in a row. Competition is too good now.

Quadree Henderson: Henderson is in a similar boat as Thomas. Except he has a smaller paddle. Rarely used as a receiver, I’m estimating he got only 20-30 reps there throughout all the practices combined (in comparison, I’m guessing Thomas saw somewhere between 75-100).

That makes him an exclusive returner, nearly extinct in the NFL today, and he’s struggled there too with both opportunity and productivity. No punt returns (despite having chances) and two kick returns in two games. That’s not going to cut it. One of the quietest and most non-descript camps of anyone at Latrobe.