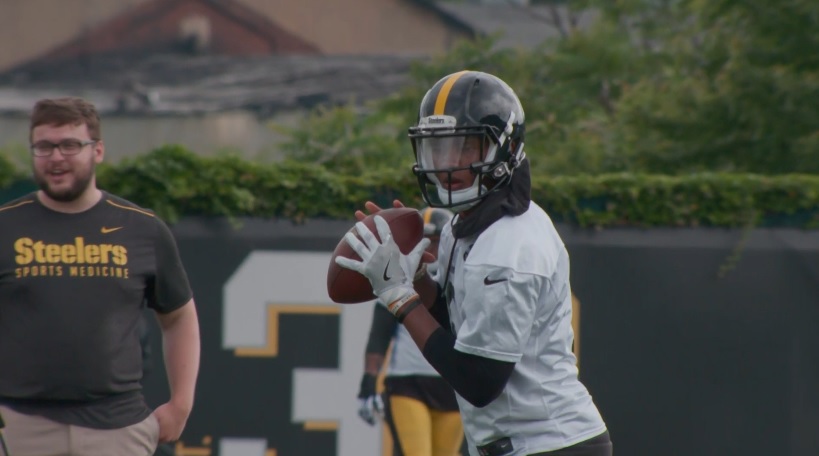 The Pittsburgh Steelers are now a third of the way through their 2018 training camp and with four quarterbacks currently on the roster, speculation is beginning to ramp up in regard to which one of them might ultimately be cut come Week 1, barring any injuries taking place beforehand. If you were to name a favorite to not survive final roster cuts this year, it would obviously have to be Joshua Dobbs, the team’s fourth-round selection in 2017. Should Dobbs ultimately wind up being the odd-man out, most fans seem to be convinced he wouldn’t likely clear waivers and thus not make it to the Steelers practice squad should the team ultimately decide they want him there.

When teams do decide to keep three quarterbacks on their 53-man roster to open a regular season, usually the third and final one is one who has already spent some time with the organization. Sure, you can find exceptions to that rule and one need not look any further than the Steelers a few years ago to find one as Zach Mettenberger was claimed off waivers from the San Diego Chargers just prior to the start of the 2016 regular season to be their third quarterback. Mettenberger, however, was a bit of a known commodity, so that needs to be kept in mind.

Personally, the only way I see Dobbs not clearing waivers come September should he ultimately fail to make the Steelers 53-man roster, is if he has a very, very impressive preseason. Even so, such a showing would only slightly increase his odds of getting claimed off waivers due to teams just not having time at the beginning of a regular season to dedicate to a No. 3 unfamiliar quarterback.

You could use the argument that it only takes one team and that indeed would be true. In my opinion, that one team in the case of Dobbs this year could ultimately be the Browns and that’s only because Todd Haley is now their offensive coordinator. Even so, the Browns currently have four quarterbacks on their 90-man roster and two of them are veterans in Tyrod Taylor and Drew Stanton. Odds are good Haley might want to keep both of them around to help bring along Baker Mayfield, the Browns first-round draft pick this year.

Personally, I like Dobbs’ chances of clearing waivers come September, should he ultimately not make the final cut. Assuming that comes to fruition, we’ll then have to wait and see if the Steelers have any interest in carrying him on their practice squad and that’s something the team doesn’t have a long history of.