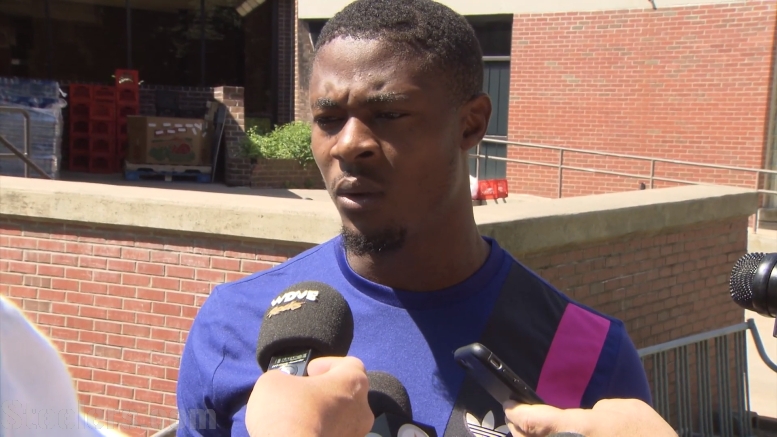 I don’t know how many articles about Artie Burns can begin by talking about how important a season this one is for him, but that is and is going to be the gist for the third-year Pittsburgh Steelers cornerback until he has that big year.

Drafted as a 20-year-old underclassman in the first round in 2016, the Miami product has been in the starting lineup for a year and a half now and has not yet shown the sort of consistency that would give coaches a lot of confidence in a young defensive back.

He knows it, and he’s not sweating it. It’s what he signed up for, as he told reporters yesterday. Asked if he felt pressure about the need to improve this season, he said “no, I’ve just got to get better. There’s no pressure. I joined this sport to be the best and I’ve got to keep working to be the best. I go against [Antonio Brown] every day. He helps me with that every day”.

The coaching staff has stuck Burns against the All-Pro wide receiver with regularity since his rookie season, and he has given Brown just a bit more to deal with every year so far. Burns has had a few nice plays against him in training camp already, including picking off a pass during a Seven Shots installment.

“There are expectations” with being a high draft pick and an older player, he said. “I’ve got to live up to it…I just want to get better every year. It’s my third year. It’s time to really start chipping in and showing what I can do”.

Burns recorded three interceptions and 13 passes defensed as a rookie in 2016 as a cornerback who was only a full-time starter as a ‘base’ defense cornerback for less than half of the season. Over a full 16 games playing almost every snap a year ago, he did not better those numbers, recording only one interception—against a third-string quarterback in the end zone—with the same amount of passes defensed.

Not to say that he regressed, by any means. Statistics only do one part of the job of telling a full story. He made important strides, but there are still several areas of his game that are beckoning for improvement.

As could be said for the secondary as a group, a fact that the defensive backs can’t escape even if they wanted to. Burns talked about the importance of his group stepping up for the entire defense this season, especially now that the investments have been made on paper.

“To win, period, the secondary is the last line of defense”, he told reporters. “If we could be the best line on the defense, we’ll always be good, getting the ball down and stopping all the deep plays”.

Burns himself was responsible for giving up some of those deep plays. They do happen occasionally, but you don’t want to see them come from mental lapses.