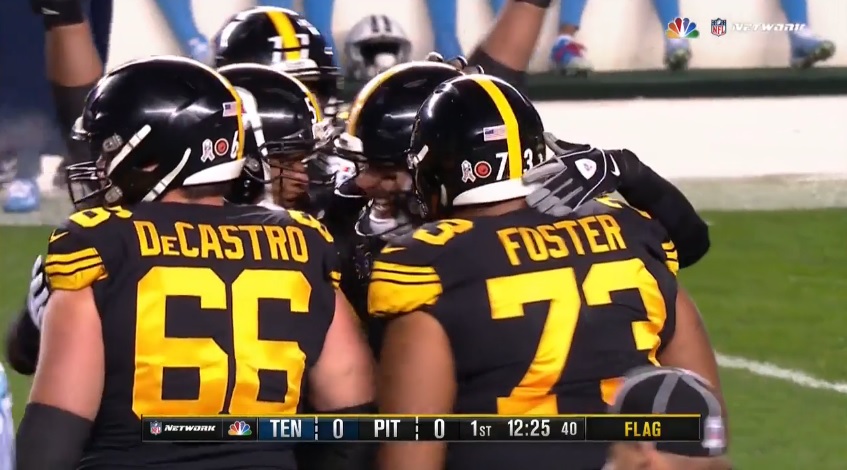 Alejandro Villanueva: I recently wrote that the most important thing for him is get off to a good start as opposed to the past two seasons where he’s struggled the first month. So however best he can shake off that rust, that’s what I’m hoping for, though certainly couldn’t tell you what the specific issue is.

Bend is another inherent problem because of his 6’9 frame. Something you could argue he always has to work on, gaining leverage and not letting speed rushes get under him, but to his credit, he’s done a good job handling those throughout his career. He’s at his best when he’s allowed to be aggressive in his pass set and use his length/upper body strength to knock down the hands of defensive ends.

Ramon Foster: As an established veteran, there isn’t much you’re looking for him to improve on. Foster is what he is at this point. But there is the elephant in the room; when will the decline start? To be fair, I haven’t seen any signs of that yet and I’m not going to assume it will happen until we actually start to see it on tape.

Though he isn’t the most nimble linemen, his big size makes him tough to get around in pass protection. But you have to think if there is one aspect of his game that will go first, it’ll be in the passing game, losing the ability to mirror and move laterally against counter rushes or sliding to the inside against stunts. Again, no reason to flatly assume this will be the year but it’s something we’ll be watching.

Maurkice Pouncey: With how strong this line is, there’s very little to talk about with the starters. They’re talented, established, and rarely endure serious criticism. The biggest thing to watch with Pouncey is his workload. Something the team has managed since coming back from his career-threatening knee injuries in 2013. That will mean several missed practices and one reason why the team tends to go heavy along the offensive line (currently with 16). It’s the pragmatic move and a pretty boring one but when you’re a top center in the game, there isn’t much else to discuss.

David DeCastro: Again, not much to stay. If the whole unit stays healthy this preseason, it was a successful one. DeCastro elevated his game in 2018 and is one of the top three guards in the NFL, in my opinion. He’ll show up Week One and kick butt. His one-on-one battles versus Stephon Tuitt in OL/DL work will be a lot of fun to watch.

Marcus Gilbert: Gilbert’s looking to bounce back after a tough 2017, dealing with injuries and a four-game suspension. With that in the rear view mirror, there’s no reason to expect anything but a stellar season from him. Another top five player at his position whose high-level athleticism keeps Ben Roethlisberger upright.

Matt Feiler: We have the most insight of Feiler at guard, there’s where he started in the regular season finale last year, but still, it’s a limited sample size. Feiler is being groomed as the “do everything” linemen on the roster in an attempt to replace Chris Hubbard with the potential to play all five spots on the o-line. That’s included some snaps at center. Will he get that work in camp? Will he play both tackle spots or just on the right side? So we’re watching the quality of his play but where those snaps come from will be a big story, too.

Chukwuma Okorafor: The team’s 3rd round pick who won’t have the redshirt year like anticipated following Jerald Hawkins’ season-ending injury. The Steelers normally ask their tackles to play both spots, and he’s indicated he already has, but I wonder if there’s going to be a highlighted focus on the left side. That’s the spot he’s a little more comfortable with and one Feiler isn’t an ideal guy to play on the blindside.

As for his play itself, it’s everything you look for from a rookie. Someone who processes quickly, letting him play fast. There’s no a lot of gameplanning so it’s hard to know the type of pass rusher you’re facing but he has to read the ends move and counter correctly.

One of my biggest issues with him coming out of college was a lack of nasty and fire in his belly. I want to see him get angry, maybe a little scuffle at camp. Someone push his buttons and in-game, drive his feet, and finish his blocks.

B.J. Finney: He’s gotten more time at guard than center but I hope he takes some worthwhile snaps at the pivot this year, and I suspect he will with the team continuing to give Pouncey a relatively light workload. Him being a little bit smaller helps him more at center than guard. Him handling bull rushers and big nose tackles is always at the top of my list. Had issues with that in camp last year.

Jake Rodgers: For his sake, I hope he’s running with the second-team this camp, though that isn’t guaranteed. Rodgers was with the team last season but was used as a third-team tackle, which means fewer reps during practice and in some games, practically nothing. Hard to make an impression with so few reps. He’ll likely be battling Bryce Harris for that right tackle spot.

Rodgers does have some extra value by being capable of playing on the blindside, something I don’t think Harris is going to bring, but that only gets you so far.

Bryce Harris: Harris was the vet brought in after Hawkins was done for the year. A true definition of a journey man, I’m just looking at him to be a stabilizing force around the rest of the young guys. High IQ, he can pick up blitzes and stunts, and make sure the QB isn’t turned into mush. Pretty important when you have some valuable assets, Mason Rudolph and Josh Dobbs, back there.

Patrick Morris: To me, one of the Steelers top UDFA signings and though the 53 man roster feels like there’s no room, he has a great chance to make the practice squad. Guard/center versatility and a freak of an athlete who was only hamstrung by injuries last season. Curious to see where he lines up, if he plays both spots, and where he looks better at. Can he show that movement ability pulling on trap blocks or on screen plays? And how much does his lack of size and length hurt him in tight spaces? I think he’ll handle it well but we’ll see.

Parker Collins: Now we run into most of the UDFAs and futures contracts who aren’t coming into camp with high expectations. A guard turned center back at Appalachian State, I imagine the Steelers play him at the former, his most natural position. He’s on the smaller, squatter side. Maybe a little reminiscent of Chris “Chicken Nugget” Elkins from a couple years ago.

Larson Graham: A local kid from Duquesne, I believe I read one report from a beat writer that said he was primarily playing guard in OTAs. Thing you need to know about him is a nasty demeanor so I’m expecting him to at least be physical and piss some d-linemen off during camp.

Joseph Cheek: At 6’6, you’d think he would land at tackle but Cheek mostly played RG at Texas A&M. So many others on this list seem like interior guys so if I had to guess, Cheek is going to log snaps on the outside. He’s been in the league for three years now so I’m hopeful he won’t look as lost as some of the other rookies he’ll be playing alongside with. If he is at tackle, he’ll have to overcome an ideal lack of length, sub-33 inch arms, with good hand use and technique.

R.J. Prince: Prince has been listed as a tackle/guard and currently, just has an “OL” designation on the team site. At North Carolina, he definitely played more guard than tackle and despite his taller frame, I think/hope he settles on the interior. Prince has surprisingly quick feet and the ability to mirror to DTs. I think there’s some serious intrigue there and practice squad potential. If he can play tackle though, or at least play it well, it’ll really increase his chances.

Chris Schleuger: Schleuger is definitely an interior player, a guard in all likelihood, who isn’t a great athlete but not terrible either. Good IQ – UAB would switch him between left and right guard on the same drive at points last season. He did play left tackle at Northern Iowa before transferring, which gives him some shades of Hubbard, but I don’t think that tackle value is going to hold up at the NFL level.

Christian Scotland-Williamson: He’s a tight end, not an offensive linemen, but I totally blanked on adding him with the tight end group (my bad). He’s the team’s international player and a practice squad exemption, the 11th player on their squad. He’s one of the most interesting players in camp for his size (6’9, 274 listed), but he’s totally inexperienced after a rugby career across the pond. Expect him to be totally raw, especially as a blocker, but if he can show incremental improvement and make a handful of splashy plays as a receiver, there’s something to work with come Year Two.