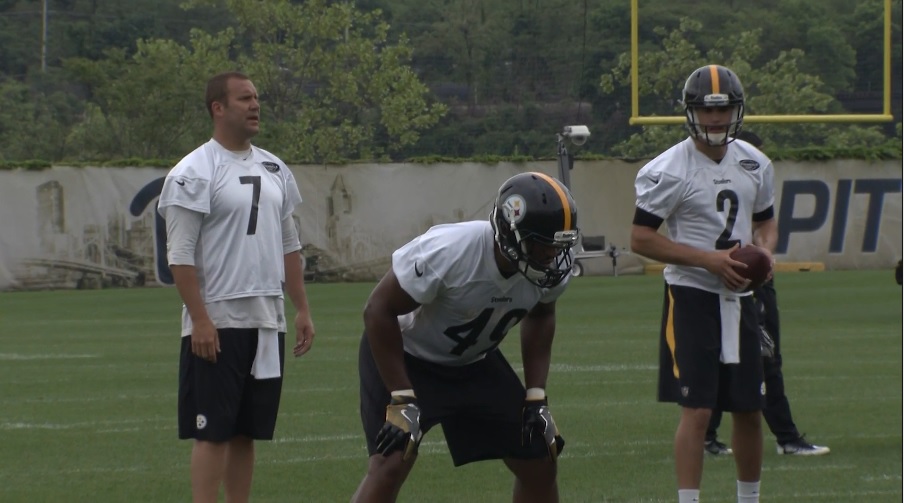 During an interview last week with the media, new Cleveland Browns offensive coordinator Todd Haley seemingly took a veiled shot at Pittsburgh Steelers quarterback Ben Roethlisberger while talking about the state of the current quarterback room he’s now in charge in. That veiled shot at Roethlisberger came from Haley while he talked about the importance of him now having veteran quarterback Tyrod Taylor being the strength and thus setting the tone in that position group’s meeting room with his leadership.

None of us on the outside know for sure what kind of leader Roethlisberger really is in the Steelers quarterback room and just how helpful he may or may not be to the younger signal-callers on the team. On Wednesday, however, Steelers rookie quarterback Mason Rudolph was a guest on SiriusXM NFL Radio and this year’s first of two third-round draft picks made it clear that Roethlisberger has helped him thus far during the short period of time the two have been around each other.

“We’re kind of all in different walks of our career with Landry [Jones] and Josh [Dobbs] and then obviously Ben, so we get along really well,” Rudolph said of the state of the Steelers current quarterback room. “It’s just a big group of guys that want to learn and want to continue to perfect their craft. And the times that we have been around Ben, he’s been great, he’s been helpful. Just seeing the way he kind of runs even stuff like just routes on air, he’s the one that’s kind of dictating what we’re going to do that day. He’s giving pointers, he’s placing balls here and there, he’s kind of letting me know that ball placement’s everything and we’re going to protect the receiver here and there and on certain routes and looks and conversions. So, he’s been great and it’s fun to watch one of the best.”

In addition to seemingly getting along fine with Roethlisberger in addition to learning some from the veteran during the Steelers offseason practices, Rudolph also made it clear during his Wednesday interview that one of the team’s new assistant coaches this year, Matt Symmes, has also helped him transition from the college level and especially with the CBA limiting the amount of offseason time players can spend with members of a team’s coaching staff.

“We’ve got a great quality control in Matt Symmes, a guy who has coached around college for a long time and this will be his first year with the Steelers,” Rudolph explained. “So, we’re kind of in the same boat of trying to learn the system and he’s been great with me to be able to be a guy I can go to when Coach [Randy] Fichtner isn’t legally allowed to meet and so that’s kind of got me up to speed.”

Rudolph said Wednesday that he believes he had a great set of offseason practices and that he progressed from the start of rookie minicamp through the end of the team’s mandatory minicamp. He did admit, however, that there has been a little bit of a learning curve for him along the way in certain areas.

“I think that that rookie minicamp there were times where I felt frustrated or a little uneasy,” Rudolph said during Wednesday’s interview. “But I think reps are the biggest thing in the world that help me and experience and just getting out there on the field and learning from your mistakes early on and then seeing improvement and then making a lot of plays, which I did throughout the course of OTAs and minicamps.

“I would say, specifically, just protections, which I thought I had a pretty good, and I still do, a pretty good idea of which protections we were going to have in before I got there because I was able to kind of study up before I got back into Pittsburgh. But Coach Fichtner has been great teaching me, kind of getting me up to speed with the other quarterbacks, as well the other guys in the room, have really helped me kind of develop.”

Now that Rudolph has the next five weeks off before training camp gets underway, he said Wednesday that while he will spend some of that summer break back home with his family relaxing, he already has a plan in place that should have him fully prepared for the annual proceedings that will take place in Latrobe.

“I put together a great plan the next month or so,” Rudolph said. “Obviously, you want to stay in shape and you want to keep throwing, but I think the mental part is going be the biggest for me, by far, just to close the gap as far as the Pittsburgh Steeler football IQ right now. And whether that’s studying the playbook, you’re on the field, you’re going through a practice script, you’re trying to envision some stuff out, you’re talking protections at the line with make-believe invisible lineman, that type of thing. I’ve got a pretty good routine that I’ve consulted with our coaching staff on how I’m going to kind of prepare and stay in mental shape as well as physical.”