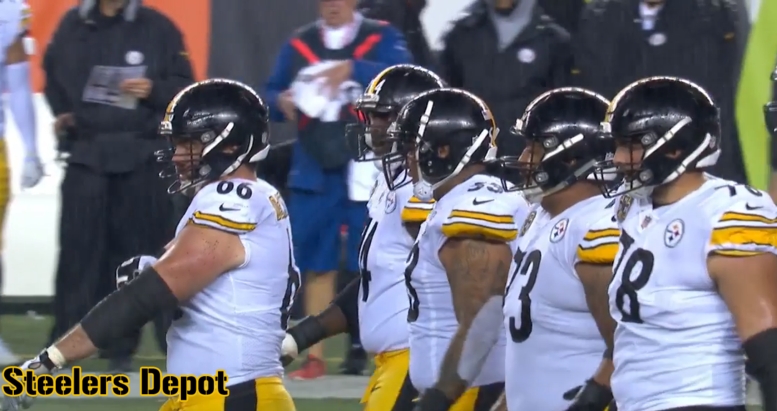 For the third straight year, we’re continuing the Ranking the Rooms: AFC North series here at Steelers Depot. You can find the latest rankings here. Today, we’ll move into the trenches, taking a look at the AFC North OL rooms.

I’ll personally run down each position, starting with the quarterbacks in the division, and ending with specialists in this 10-part series.

Let’s take a look at the 2018 rankings of the offensive line groups in the AFC North.

For the third time in three years of writing this series, the Pittsburgh Steelers’ offensive line reigns supreme in the AFC North.

The Steelers boast three returning Pro Bowl players up front in left tackle Alejandro Villanueva, center Maurkice Pouncey, and right guard David DeCastro all are back for the 2018 season, and should build off of their Pro Bowl appearances.

Along with the trio of Pro Bowlers, right tackle Marcus Gilbert returns, as does veteran left guard Ramon Foster, giving the Steelers some major continuity up front. This is arguably the best offensive line in football.

The loss of Chris Hubbard in free agency hurts the overall depth, but guys like BJ Finney, Matt Feiler, and even Chukwuma Okorafor will be able to pick up the slack in Hubbard’s place.

Keep an eye on undrafted free agent rookie center Patrick Morris out of TCU as well. He’s going to be on the practice squad at the very least, but he’s an intriguing depth piece moving forward, due to his athleticism and overall character.

The Ravens’ offensive line fell off a cliff last season due to injuries, as All-Pro guard Marshal Yanda went down with an ankle injury, while guys like James Hurst, Alex Lewis, Ronnie Stanley, and Jermaine Eluemonor mostly underperformed, in terms of pass protection.

Now that Yanda is back, and Stanley closed the year strong at left tackle, the Ravens should be able to keep it rolling on the ground in front of Alex Collins, while giving Joe Flacco and/or Lamar Jackson more time in the pocket to make plays down the field.

Nico Siragusa returns from a torn ACL to give the Ravens a possible starter at left guard, allowing the Ravens to push Matt Skura back inside to center after Ryan Jensen signed with the Tampa Bay Buccaneers in free agency.

Rookies Bradley Bozeman and Orlando Brown Jr. give the Ravens much-needed depth behind the starts, while Brown could overtake someone like Lewis or Hurst at right tackle during training camp.

This is a group on the rise.

The Browns drop a spot in the rankings this year, and that’s solely due to the retirement of left tackle Joe Thomas, one of the greatest offensive linemen in the history of the NFL.

Cleveland didn’t do much to try and replace Thomas, aside from drafting Austin Corbett in the second round of the draft, but reports out of OTAs are that Corbett won’t stick at tackle due to a lack of athleticism. Not good.

The retirement of Thomas means Shon Coleman will slide from right tackle to left tackle, while free agent signee Chris Hubbard will take over at right tackle. Guards Kevin Zeitler and Joel Bitonio give the Browns two standouts on the interior, as does center JC Tretter, who played well last season after coming over from the Green Bay Packers in free agency.

Depth isn’t an issue with the Browns either, as there are plenty of bodies available that even casual fans would know, but it’s not “good depth.” Guys like Spencer Drango, Anthony Fabiano, Donald Stephenson, and Greg Robinson are all on the roster, but there’s not much upside there.

Cincinnati was one of the worst offensive lines in football last season, and while they traded down in the draft with the Buffalo Bills to acquire Cordy Glenn, and the selection of Ohio State center Billy Price, the Bengals still have major question marks up front, outside of left tackle and center.

Third-year tackles Jake Fisher and Cedric Ogbuehi still haven’t figured it out in the NFL, while guard Clint Boling is the only other real starter penciled in for now. Ogbuehi will likely benefit from a move from left back to right tackle, but he doesn’t have good technique and can be beat with power more often than not.

Boling is a decent guard, but guys like Trey Hopkins and Christian Westerman are the other two guards battling for the starting role. Price and Glenn is a solid core to start with, but the Bengals still need a ton of work up front.