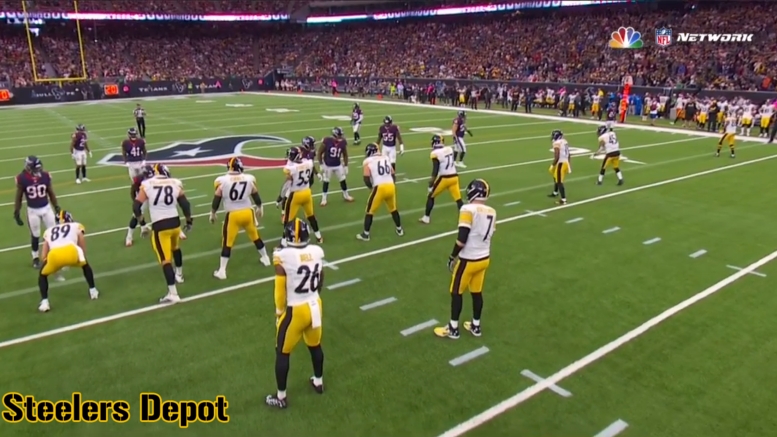 Hi folks, I’m back in the saddle after a trip to Cote D’Ivoire. There is another proud owner of a Terrible Towel who enjoyed learning about its history and connection between the Pittsburgh Steelers and its fans. 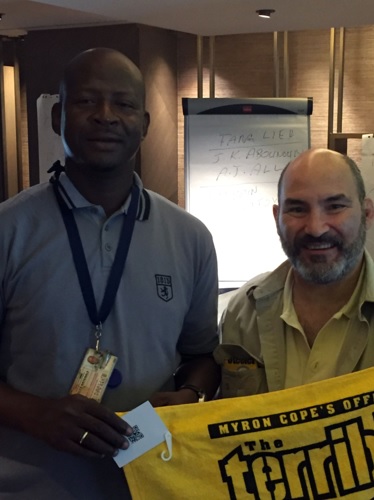 We our now measuring the time to the opening of the Steelers 2018 regular season in weeks. Training camp at Latrobe opens in about 45 days giving the public a first glimpse at the 91 players (international prospect Christian Scotland-Williamson does not count against the 90-man limit) who will be whittled down to the 53 men who will form the initial 53-man roster to open 2018 regular season.

The last official Pittsburgh Steelers transaction was last week when Jerald Hawkins and Jake McGee were placed on injured reserve following the OTA’s. Bryce Harris and Ryan Malleck were signed to replace them on the roster. Just like last year, the huge pending transaction is whether Le’Veon Bell is signed to a long-term contract or is once again to play the season under a franchise tag. The red-letter date is July 16. If Le’Veon and the Steelers do not agree to a long term contract by 4PM on that day; “the player may sign only a one- year contract with his prior club for the 2018 season, and such contract cannot be extended until after the club’s last regular season game.” Regardless, Le’Veon appears on the Steeler’s current roster and will likely be playing for the Black & Gold in the opening game.

I doubt that the current 90-man roster will have any huge changes before camp starts. The 53 players who will start the regular season are on the roster already – or do you think someone else will be picked up?

As an average fan; I’m ready to look at the position groups to see how the club is looking for the upcoming season. Of course, this preliminary evaluation goes out the window the day camp starts. Then we get to see who is in shape, who has been hiding lingering injuries and how quickly the new Steelers adapt to the NFL. The starters are of course most important; but if we have learned anything the 16-game regular season makes depth the key to a team’s success.

Like last year, two grades will be assigned for each group; first the starters and how they should stack up against the opposition. The second grade is for the back-ups. There will of course be drop off but how well can the Steelers do if they must step in for a couple games. Here are the grades given last year.

Quarterbacks: Ben Roethlisberger. Nothing more needs to be said about the starter. There is a new player among the potential back-ups. Will Mason Rudolph prove that he could be the future by displacing Joshua Dobbs or even Landry Jones as the number 2 quarterback? Landry Jones has proven that he can manage games but if he must play more than 1-2 meaningless games at the end of the season there’s serious problems. Dobbs is the odd man out. His best chance to stay with the Steelers is through the practice squad.

Starter: A
Depth: B-

Running Backs: The Steelers should have the best all-around running back once again in 2018. The question will be whether Le’Veon Bell will be playing his last season wearing the Black & Gold. Pittsburgh’s chances of going on a deep run in the playoffs are much better with him than without. James Conner is recovering from a knee injury so is an unknown quantity at this point. His poor pass blocking led to less snaps last year. Fitzgerald Toussaint and Stevan Ridley who was signed late last season return. The drop off from Bell is considerable. A potential wildcard is 5th round draft choice Jaylen Samuels. He was listed in the draft as a tight end, but the Steelers have him on their roster as a running back. His versatility may prove a difference maker in making the 53-man roster if he can prove to be adaptable to the NFL while at Latrobe.

Wide Receivers: There are eleven wide receivers on the Steelers current roster. Only five or six will make the 53. Antonio Brown is still a premiere receiver in the NFL. JuJu Smith-Schuster electrified the fanbase with some of his rookie exploits – can he pick-up where he left off? Will James Washington’s choice in the 2nd round help us forget all the potential that Martavis Bryant brought to the field? Will Justin Hunter transfer some of the skills he shows in camp to stretch the field into game days? Will Darrius Heyward-Bey’s special teams acumen give him yet another season with the Steelers or will Marcus Tucker, Justin Thomas or another young player take his spot? What was the strongest position group last year, has many more questions but remain dangerous.

Tight Ends/Fullback: Vance McDonald showed that he can catch and run with the ball. Now, will a full preseason with the Steelers and a healthy body translate into more production? I’m banking on it. Young Jesse James did improve in catching the ball – despite whatever Alberto Riveron rationalizes. He has something to prove and will play with a chip on his shoulder. I do not think Ryan Malleck has what it takes to displace Xavier Grimble; so, see the group unchanged from last season but more experienced. Roosevelt Nix only played 16.4% of the offensive snaps last season. Thought it would be more but see him repeating at fullback. This should be an improved position group.

Offensive Line: All the starters are back: Maurkice Pouncey, Ramon Foster, David DeCastro, Alejandro Villanueva & Marcus Gilbert. However, depth proved especially important last year when Gilbert was injured and then suspended for taking a banned substance while trying to recover. He only played 36% of the offensive snaps and only played in seven regular season games. B.J. Finney is back to back-up the interior. The question is who replaces Chris Hubbard as the swing tackle? Matt Feiler increased his repertoire by playing some center at the OTA’s so may be capable of backing up all five positions. How would he hold up if he had to start four or five games? This also puts the selection of Chuks Okorafor into the spotlight. If he ends up playing a sizeable number of snaps this season Kevin Colbert’s draft grades may go up. This group’s pedigree is such that it should be dominating the line of scrimmage. Not sure they proved that last year. Nevertheless, if the starters stay healthy it could be a harbinger of a powerful offense.

That’s my grades on the offense. How’d I do? Next up will be the defense & special teams.

In the 2018 Memorial Day Weekend: Steelers Friday Night Five Questions, I committed to play songs that Steelers Depot respondents had suggested might be the new Steelers anthem if Renegade by Styx was ever replaced. Wes Lee gave a late entry: You’ve Got Another Thing Coming by Judas Priest. One down 44 to go.