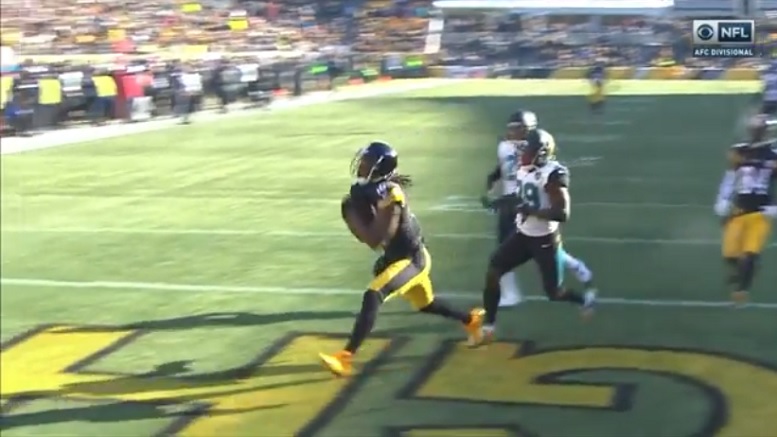 What were the top 10 plays of 2017 for the Pittsburgh Steelers? The NFL took a stab at answering that question on Friday as you can see in the video attached to the tweet below.

Before running down the list of ten plays, none include the Steelers defense. Additionally, 9 of the 19 plays include Steelers quarterback Ben Roethlisberger throwing the football to another player.

10 – Coming in at No. 10 on the list is the catch, run and stiff-arm by running back Le’Veon Bell during the team’s Week 7 home game against the Cincinnati Bengals.

9 – A play featuring Bell against the Bengals in Week 13 is also No. 9 on the list. This was the dump-off pass to Bell on the left side that resulted in a touchdown following an ole tackle attempt.

8 – At No. 8 on the list is the helmet catch by wide receiver Antonio Brown for a touchdown against the Tennessee Titans in Week 11.

7 – The late crossing route catch by wide receiver JuJu Smith-Schuster against the New England Patriots in Week 15 is No. 7 on the list.

6 – The Week 6 touchdown catch and run by Brown against the Kansas City Chiefs in Week 6 following the missed interception attempt is No. 6 on the list.

5 – Brown checks in again at No. 5 on the list with his great Week 12 sideline toe-tap catch against the Green Bay Packers at home.

4 – Smith-Schuster’s 96-yard kickoff return for a touchdown in Week 17 against the Cleveland Browns was good enough to be ranked No. 4 on the list.

3 – No. 3 on the list was Brown’s great 4th quarter touchdown catch down the left side on fourth down in the playoff loss to the Jacksonville Jaguars.

2 – Smith Schuster is on the list a third time and at No. 2 overall thanks to his record-setting 97-yard touchdown catch-and-run against the Detroit Lions in Week 8..

1 – Last but not least, the fourth down 36-yard touchdown pass from Roethlisberger to wide receiver Martavis Bryant with 32 seconds left in the first half of the playoff loss to the Jaguars is ranked the Steelers top play of 2017 by the NFL.

Opinion: While this certainly is a great selection of plays, the order seems off a bit. For starters, the helmet catch by Brown against the Titans is really being underrated. I also think Bell’s TD via a missed tackle attempt shouldn’t be in the top 10. Additionally, was Smith-Schusters kickoff return for a TD against the Browns really worthy of being No. 4?

Let me know what’s wrong with the order and if any other plays from the 2017 season not featured belong in the top 10.