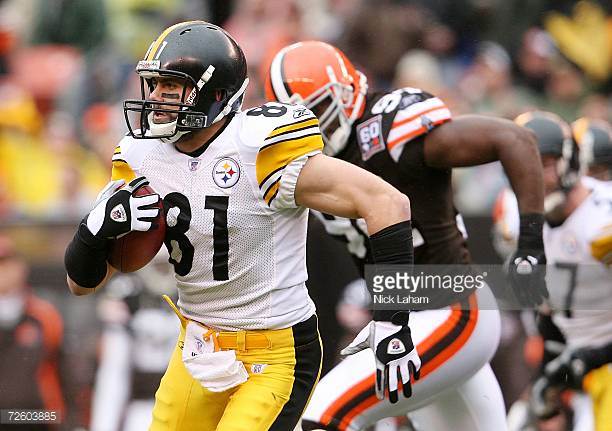 I know you have to go to Youtube to actually watch it but I implore you to check it out if you haven’t before, even though the video was filmed in 1943.

But that was his time in Arizona. His stop after Pittsburgh, where Morey is remembered for his role as a top special teamer.

Most guys like Morey don’t make it to the NFL or if they do, certainly don’t last as long as he did. A 5’11, 190 pounds receiver from Brown University with no special athletic trait to allow him to make a jump. But he had a truly prolific college career, the first football player in the Brown football history to have his number – 24 – retired.

To this day, he still holds the Ivy League record for career receiving yards with 3850, a lead he holds comfortably over second place. He credits his preparation for his success, recalling he would learn everything he could about the opposing secondary, from the players home town, hobbies, and parents names.

I pulled these two photos from the school’s website, the first of him in action and the second at his jersey retirement in ’99, though Morey curiously isn’t shown in the photo. 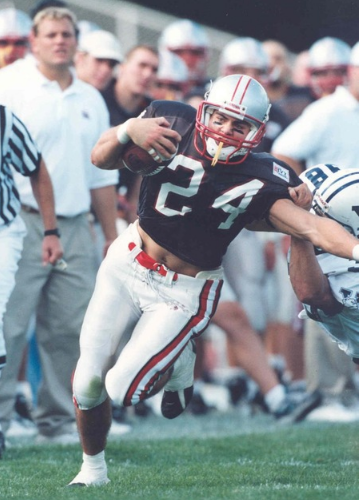 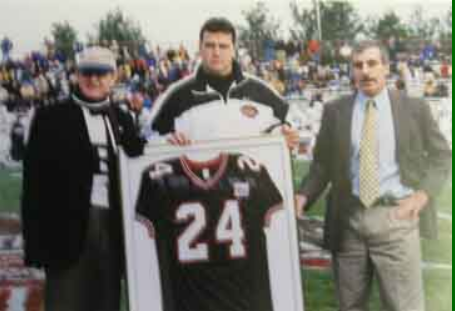 That production on his resume, the New England Patriots chose him in the 7th round of the 1999 draft. Pete Carroll, the man who selected him, had this to say about the pick.

“There’s just something special about him. He has something very unique. I don’t know if he can make our team, but his heart is huge, and he’s going to go for it.”

That attitude and toughness earned him the nickname “Insane Asylum” from his teammates.

After initially making the team as a rookie, only to be cut nine days later, he appeared in only two games over the next two seasons and spent some of his time in the old NFL Europe, playing for the Barcelona Dragons in 2000.

He became the modern day Vince Papale after signing with the Philadelphia Eagles in 2001, recording seven tackles in 2003 alone and made SI’s All-Pro team, chosen by famous sportswriter Paul “Dr. Z” Zimmerman, who wrote:

“My special teams player is the Eagles’ Sean Morey, who ranks first on the team in a Philadelphia grading system that takes into account blocks and tackles, among other statistics.”

And last month, he was added to Rick Gosselin’s all-special teams list as a second-team coverage player. High praise from a guy who knows special teams as well as any writer…maybe ever.

That strong season parlayed itself into a trip to Pittsburgh and Bill Cowher, who coveted top special teams players. Over his next three seasons, he recorded a ridiculous 42 special teams tackles, at least 10 in every season and a whopping 16 in 2006 and was named captain of the Steelers’ special teams.

Despite being listed as a receiver, he saw virtually no time there. Morey caught only three passes as a Steeler, though he did return a kick 76 yards in a win over the Cleveland Browns in 2006. But he and other key cogs in Pittsburgh – Clint Kriedwalt and Chidi Iwuoma – made up one of the league’s best coverage units and helped the team win Super Bowl XL.

It’s a rarity for a special teamer to spent long at any one place. Three years is practically a lifetime. So he moved onto Arizona in 2007, enjoying similar success, and making the Pro Bowl in 2008. He was a little more involved in the offense, that first year at least, catching 8 passes, including that 62 yard pickup before Willis hunted him down. His Cardinals lost to the Steelers in the 2008-2009 Super Bowl, where Morey made one tackle. Earlier that year, he became the first player to end a game on a blocked punt, knocking back Mat McBriar’s attempt in an overtime win over the Cowboys.

He briefly spent time with Seattle for the start of the 2010 season but citing a history of concussions, retired before camp began. Announcing he was walking away from the game, he was asked what he’d miss most and gave this “grit level 1000” answer: the scout team.

“Sundays and, I can’t believe I’m going to say this, but playing scout team receiver. I used to go so hard and I loved competing against some of the best athletes in the game. Nothing can replace that competition.”

Morey would later expose the dark underbelly on the NFL, highlighting the problem with how the league handled head injuries, and the effects he’s suffered since walking away from the game. He was diagnosed with post-concussion syndrome and in this interview with NPR, estimates he suffered over 20 of them throughout his career. The entire article is a harsh reminder to how physical the game is but this line sticks out above the rest.

“In his final season in 2009, he had four concussions in just one game, he says. ‘Every time I hit somebody it was like getting tasered,’ he says.”

And the symptoms of the concussions he endured during his playing career.

“When I sat down to talk with Morey and his wife, Cara, at the home they share with their three young daughters in Princeton, N.J., they told me about the symptoms that Sean has shown over the past four years. He’ll get crushing migraine headaches that knock him out of commission for days at a time. He’ll launch into bouts of explosive rage, shouting at his family. He has trouble focusing, forgets things and loses his train of thought.”

He became the founder of the NFLPA’s tramatic brain injury committee and helped bring litigation against the league for how they’ve handled and treated concussions. Morey has also decided to donate his brain so doctors can learn more about the disease.

But despite the pitfalls of the game, Morey got involved in coaching it. He got hired by Princeton as an Athletic Administrator and two years later, to coach their sprint football team, a “lightweight” version of the spot that’s full-contact but requires its players to weigh under 173 pounds. The team, unfortunately, didn’t have much success and Morey lost all 10 games he coached. Some of the results were…ugly; an 86-0 walloping to Army in 2015 and 67-0 loss to Mansfield in 2014.

Morey wasn’t their first sprint football coach. But he was the school’s last, the university shuttering the program first created in 1934. To be fair, losing began long before him. The school dropped its last 106 games, dating all the way back to 1999, when they knocked off Cornell in the season opener.

Since 2016, he’s served as an assistant coach for The Lawrenceville School in New Jersey.

Sean Morey, your blast from the past.