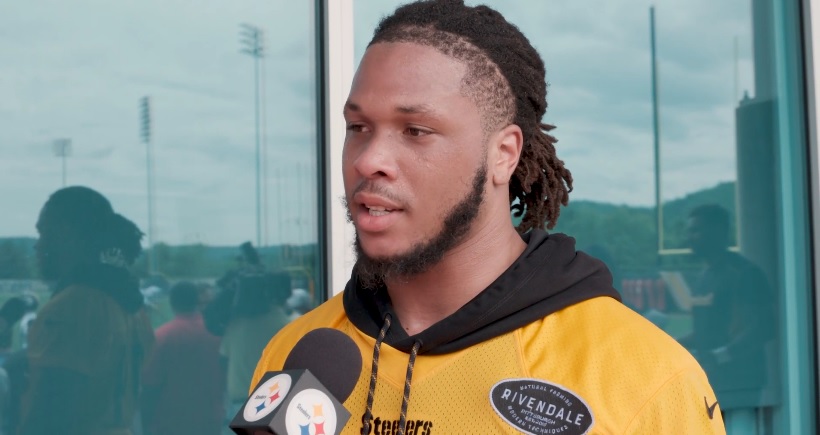 It was a disappointing rookie season for former 7th round pick Keion Adams. A promising first week to training camp derailed by season-ending shoulder surgery. But with depth at outside linebacker wide open and Adams finally healthy, he’s looking to make up for lost time.

And Adams is keeping a positive attitude for what he went through last year.

“You can’t look at it as a negative,” he said in an interview posted on the team site. “You have to take every negative and find the positive in it. If not, you’re going to stay down.”

In his mind, that meant a chance to soak up mental reps, get comfortable with the playbook, and be able to apply that to 2018.

“I had to mentally prepare. Learning how to watch film. Running through plays and things of that nature. Working on my technique with the little things because I wasn’t able to do things because of my strength.”

There’s a quiet buzz for his ability to help the Steelers this year. Kevin Colbert spoke about him after the draft and with no Arthur Moats or James Harrison blocking his path, Adams could see playing time this year. He’ll compete with Anthony Chickillo for a top backup spot. While Chickillo has versatility and is a smart pass rusher, we’ve pretty much seen his ceiling. For Adams, we don’t know how high his career can go.

Of course, the first step is showing what he can do in a game, something he couldn’t do before going down injured in 2017. And the position he plays is demanding, asking him to drop, rush, and defend the run, meaning there’s plenty on his plate with very little reps to actually get better.

That’s why OTAs is so important to a guy like Adams, someone who hasn’t played football in 11 months. To shake off the rust and start fast in training camp.