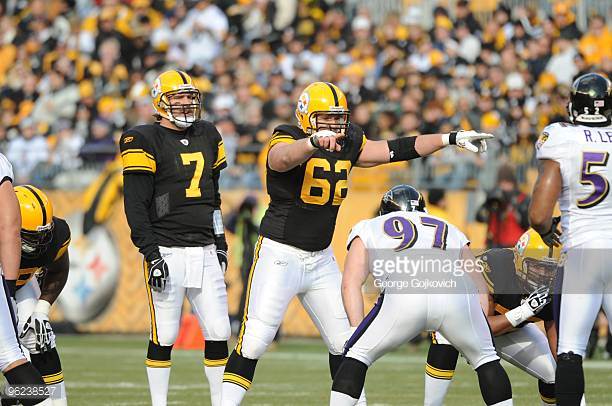 Bringing you another Pittsburgh Steelers’ interview courtesy of our good friend Ron Lippock of the Pittsburgh Sports Daily Bulletin. Today, Ron chats up former Steelers’ center Justin Hartwig, who won a Super Bowl with the team in 2008-2009. They discuss playing for Mike Munchak, how he came to Pittsburgh, and his relationship with Ben Roethlisberger.

First, can you let me know a little nit about what you’ve been doing since your time in the NFL?

Once I was done with the NFL I dedicated my life to being a single dad. After I retired I thought it would be a perfect opportunity to take time with her. In April I just got married. Family is very important to me…I have an eight-year old daughter and now a sixteen year-old stepdaughter.

Beyond family, my main thing is the ministry. After the Super Bowl I accepted Christ and am now sharing the hope of Christ. Now I speak at churches and get asked to do speaking engagements and appearances. It’s an opportunity to share my faith.

After playing I also went to health and nutrition school. I was a 310 pound offensive lineman who ate and worked out and my body never knew what was happening to it. My body went through a lot of transition. Now, I’m a licensed health coach. I share that education with other people and do speaking engagements for that as well. I’e learned to grow my own vegetables and farm. I’m discovering what I’m interested in. In my football career I was so engrossed in the sport I had no time for anything else. I own a property now in Southcentral, PA where I farm, do recreation, do hunting… That’s become a passion of mine.

Also, a few years ago a friend of mine approached me as well to start up a donut shop, which I know was against my other interests!  I sold that recently but it was a great learning experience. My next mission is to become a coach at some level. Now that I’m married I feel I can branch out and impact the lives of young people.

That’s a great segue as I wanted to ask you about your first NFL head coach Mike Munchak. What was he like to play for and how did he help you as a player?

He was a special coach. I was very raw when I came to the NFL and wasn’t ready for the NFL world. The Titans saw some promise in me I guess after my first year and kept me around. If I had another coach I may not have lasted.

He was highly respected in the room. I looked up to him. We didn’t play for him out of fear. We wanted to make him proud. He was extremely detail-oriented. In the NFL it was the details that mattered. Details people don’t realize – hand placement, footwork….it takes a lot of repetition and attention to details in the walk-throughs.  He was a been there and done and done that guy and one of the best offensive linemen ever.

I was excited to see him come to Pittsburgh and am interested to see what goes on with him. I know he just turned down the second interview with Arizona. He could have stayed on at Tennessee as their head coach but was loyal. They told him he’d have to fire some assistants or else they’d let him go and he wouldn’t fire his assistants so…

You mentioned the importance of faith to you. How did that play itself out in Pittsburgh?

It was a more personal thing. It was my own world view more than the behavior of the team. It really happened when I was at the pinnacle of my career as an NFL player. There was nothing at the top after the Super Bowl. You work your whole life to achieve a Super Bowl and after that excitement and emotion I had a let down. I had some personal challenges and felt deflated. What next?  So the Super Bowl was a turning point for me. My identity was wrapped up in football and I realized I needed something bigger.

Stepping back…how did you get recruited to sign with Pittsburgh in free agency – and why Pittsburgh?

I started for three straight years in Tennessee and became the highest paid center when I signed with Carolina. But after six months there I had two operations on my groin and missed the season, and had a hard time coming back.

I started in 2007 but my body was never right and they drafted Ryan Kahlil to replace me.

Two teams wanted me after that, The Steelers, who had a veteran team and felt like they were one player away on offense, wanted me to come in and at the time compete with Sean Mahan.

The Chiefs were the other team. They were a three-hour drive from where I grew up and guaranteed me a starting spot. They were rebuilding though. I wasn’t sure what to do – play for the team I followed as a kid or go for the team ready to go to the playoffs. I sat down with Mike Tomlin and he asked me what happened in Tennessee and Carolina, I told him what happened with the injuries in Carolina and that I just needed an opportunity again now that my body was healthy.  He told me the Steelers are competing for a Super Bowl every season and they just needed a guy to compete with those big nose tackles in the AFC North,

I met with my agent, Drew Rosenhaus. and he told me that when a team the caliber of the Steelers wants you, you go with the better organization.

How did you adjust as a Steeler?

I was a veteran, but when I came to Pittsburgh they put me in the housing facility with the rookies and undrafted free agents. It was like starting all over again. Like living in a college dorm, all hanging out together. Then you’d go to work and there was a big veteran presence. They were confident guys – been there and done that guys.

The offensive line was very young. We lost Simmons and Smith. It was a makeshift line but we connected with Coach Zierlein and the young guys stepped up.

How did Ben work with you guys? He seems to really gravitate to linemen.

Ben was great and he really does appreciate the offensive linemen. He knows how important those relationships are on and off the field  Ben knows you have to fight for one another in the locker room. He realizes that. He showed how important it was it was to become one of thenm. We spent a lot of time together with Ben – went on a handful of trips together. Just guys being guys getting to know each other,

Tell me a bit about becoming a veteran player – the mentor versus the one being mentored?

This was the side of the NFL I never expected. As a young player I never realized that I was seen as a threat to older guys. Someone once told me that a GM’s role is to go out and find players better than you, That stuck with me.

With the Steelers, the object was always to win games. And that meant making sure everybody was as good as they can be. It truly was a team. Realistically, as a player you’re just an independent contractor there to do a job. I worked to put food on the table for my family. I wasn’t incentivized to help others take my job.

But, at the same time if you respect the game, you realize it’s your job to help the younger guys. I tried to help Pouncey – never held back from him and gave him all the tips and insight I had. When they drafted him the Steelers called me draft night to tell me he would start off at guard. But he just wasn’t very good at guard. They moved him to enter and he was a natural. I became expendable.

Who were some of the funnier/interesting  guys on the team you played with?

Chris Kemoeatu was memorable. He was a great guy once you go to know him. When we’d all go out and he loosened up and he felt he could trust you, he would pal around with you.  All the linemen had their idiosyncrasies. Ben had his flair for the dramatic. We used to mess with him on the field and in the locker room to keep him in check.

Tell me more about that!

It was easy for him as the quarterback to become the central figure and ringleader. We just tried to keep him in check . He liked to be one of us. People get to see the side of him when he’s in press conferences but we see him in a different way. As one of us.

Any last advice as a future coach for young guys trying to get into the NFL today?

In the locker rooms where I’ve played, I’ve seen thousands of players and everyone at this level is athletically gifted. The desire to be great and ability to take coaching and doing the little things right is what separates the guys that just make the team from world champions.