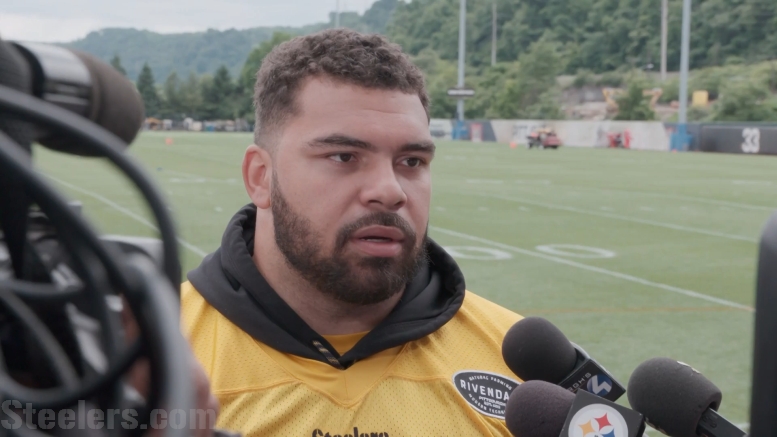 When it comes to the defensive side of the ball, nobody has been around the block more times on the Pittsburgh Steelers than has eighth-year defensive end Cameron Heyward. A couple of players they’ve brought in via free agency—Tyson Alualu, Joe Haden, and Morgan Burnett—have been in the league longer, but they obviously don’t have the same sort of investment in the Steelers’ defense.

So it is usually the defensive captain to which the reporters come seeking his opinion on what he is seeing out there on the field. Nobody on the defensive side of the ball has been on this team longer. And only four players in total have been with the team longer.

Heyward, who missed most of OTAs with what was likely some sort of minor injury, spent a lot of the time observing those who were out there practicing, but he was hesitant to say too much about any one particular player, cautioning that there is still a long way to go.

As Ben Roethlisberger said during his time speaking to reporters, we have seen plenty of players who looked great in shorts during the spring only to find that they come up short once the pads come on. That is one reason for hesitation. Heyward had another.

“It’s still early, but there are some positive things you can take”, he allowed, “but we don’t know how everybody’s going to react in adverse situations yet”. And they won’t really see that in earnest until they actually start playing meaningful games, so Heyward is really holding his tongue.

“You’ve got guys who are proven like Morgan Burnett”, the veteran said, but “you get guys like Terrell Edmunds, who hasn’t been on this stage yet. You’ve got new coaches somewhere. So you don’t know how our team’s going to look yet. It’s too early to tell”.

Of course those who have articles to write—including myself—would like to push people into giving answers that are worth putting into a column. Joshua Frazier looks like he’s going to be a real plugger against the run. Stephon Tuitt looks ready to truly break out. Isn’t that what you’d love to read?

Well, it doesn’t work that way, at least not when Heyward is the one being interviewed. He has been around too long not to know better. The son of an accomplished football player, the product of Ohio State, the student of John Mitchell, he’ll never put the cart before the horse.

He knows all he can control is how well he plays, and to that end, he is out here in OTAs just doing everything he can to better himself, no matter the fact that he is coming off a season in which he was a first-team All-Pro, leading the team in sacks with 12 when nobody else even had double figures.