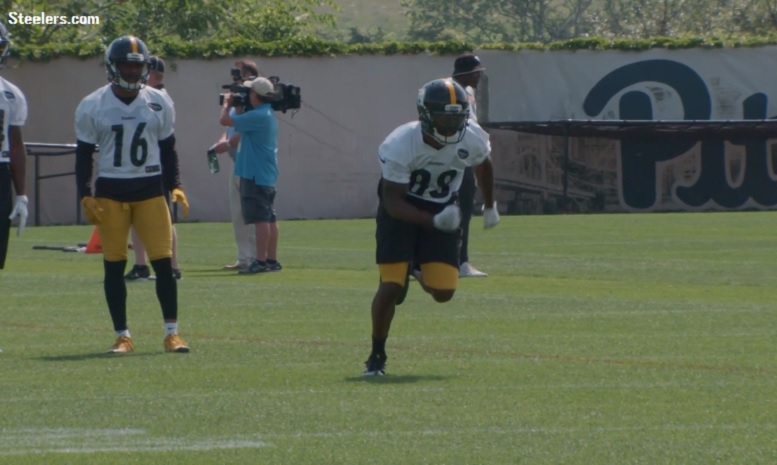 When the Pittsburgh Steelers originally signed veteran wide receiver Darrius Heyward-Bey to a one-year contract in April of 2014 there probably weren’t many fans of the team who would have bet on him playing past that one season. Not only did the former first-round draft pick of the Oakland Raiders make it past that initial season, he’s played three more in Pittsburgh since and appears headed for a fourth one in 2018.

During his Tuesday afternoon session with the media, new Steelers wide receiver coach Darryl Drake was asked about Heyward-Bey and if he has a role on this year’s team.

“What a joy to have him out there, you know,” Drake said of Heyward-Bey. “He’s a coach on the field. He’s been in the league, he’s a consummate professional, he understands, he works his tail off each and every day out here and guys can draw from that.”

Drake then proceeded to explain what he meant by other wide receivers being able to draw off of Heyward-Bey during practice and perhaps even off the field as well.

“What happens is players draw from each other more than anything else,” Drake explained. “Me, as a coach, I’m just a figurehead, but they draw from each other and what he’s done with his experience and his desire and he’s a team guy, and he helps those guys out. So, he’s a tremendous asset for me, especially. The older I get the less I can see, so I got that extra set of eyes out there that can see certain things that I may not be able to see.”

With the Steelers 2018 mandatory minicamp set to end on Thursday, one has to think that Heyward-Bey is currently inside the proverbial bubble when it comes to a potential spot on this season’s 53-man roster. When you closely examine the Steelers wide receiver depth chart right now, the pecking order obviously begins with Antonio Brown and JuJu Smith-Schuster. From there, rookie James Washington is sure to make the 53-man roster. Even so, will he be ready to the team’s full-time No. 3 wide receiver by the start of the regular season?

After those three players the depth chart includes Justin Hunter, Marcus Tucker and Heyward-bey when it comes to legitimate candidates to make the 53-man roster come September. That list could grow by one in the coming weeks if Eli Rogers is ultimately re-signed once fully healthy. Hunter, however, doesn’t play on special teams while Tucker doesn’t have any regular season game experience. Rogers, on the other hand, is merely a slot wide receiver. Heyward-Bey trumps Hunter, Tucker and Rogers in those areas on top of being considered an on-the-field coach. In summation, he’s still going to be a tough player to cut later this summer.

Heyward-Bey, who turned 31 years of age in February, has registered 32 receptions for 508 yards and 4 touchdowns in his four seasons with the Steelers. He also has registered 17 total tackles on special teams in a Steelers uniform.