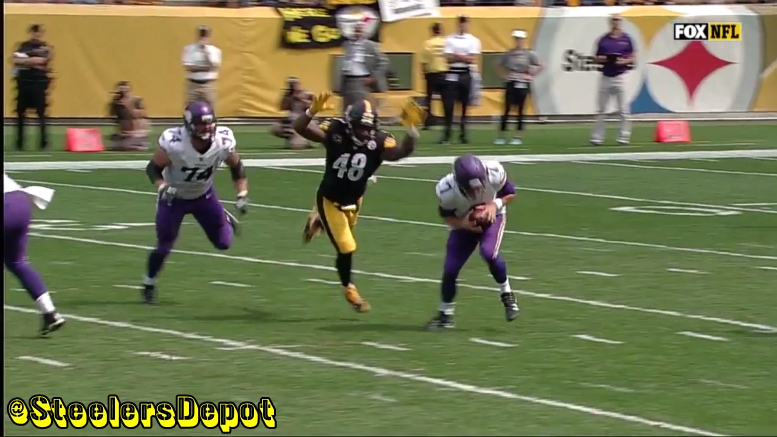 The Pittsburgh Steelers are hoping—expecting—a big season from Bud Dupree, their first-round pick in the 2015 NFL Draft, as the outside linebacker heads into his fourth season. This is nothing we haven’t heard before, of course, but 2018 is the pivotal season.

It could be the launching pad for a bright and lucrative future in Pittsburgh. Or it could be his last year on the team. Unlike fellow first-rounder Jarvis Jones, Dupree had his fifth-year option picked up, but if he doesn’t live up to the value based on his play this season, there is a very strong chance the team will cut him before it becomes guaranteed.

The Kentucky product did set a career-high with six sacks in 2017, playing much of the year with a bad shoulder that he injured toward the end of training camp. It was a month and a half or two months into the regular season before he was able to play without pain raising his arm above his shoulder and needing painkillers to suit up.

To that end, Pro Football Focus recently posted an interesting tidbit on his 2017 season. While they credited him with 40 total pressures, which was pretty good, he only converted six of those pressures into sacks or hits. The 15-percent sack or hit ratio was the worst of all pass-rushers that they graded last season with at least 300 rushes.

Bud Dupree put together the most productive year of his career pressuring the quarterback last season with 40 pressures.

He only turned those pressures into 6 sacks and 0 QB hits though. That rate of 15% ranked last among OLB with 300 pass rush snaps. #SteelerSpotlight https://t.co/UvAM6hU0lN

“I feel myself getting better and better each day”, Dupree said. “I know I’m going to be the best I can be, one of the most talked-about at my position”. Fowler wrote that the linebacker pointed out some areas in which he knows he needs to improve, including midjudging plays and staying too high.

“Make plays within the scheme and it will happen”, he went on. “You don’t want to be stagnant. You just have to finish”. And based on PFF’s statistics, he was clearly not efficient at all in doing that. While it’s better to get pressure than not, pressure is much more effective when it actually physically disrupts the quarterback, even if it doesn’t end in a sack.

Bud Dupree said him and fellow OLB T.J. Watt pass-rushing from the same side of the formation in a recent practice is an example of the defense experimenting with different looks in offseason work.

Fowler added in his article, as well as in a Tweet, that the Steelers were working on using Dupree and T.J. Watt to rush from the same side at the same time as one of the tinkerings they have been working on. I don’t believe they used this look much if at all a season ago, but they have used it in the recent past.