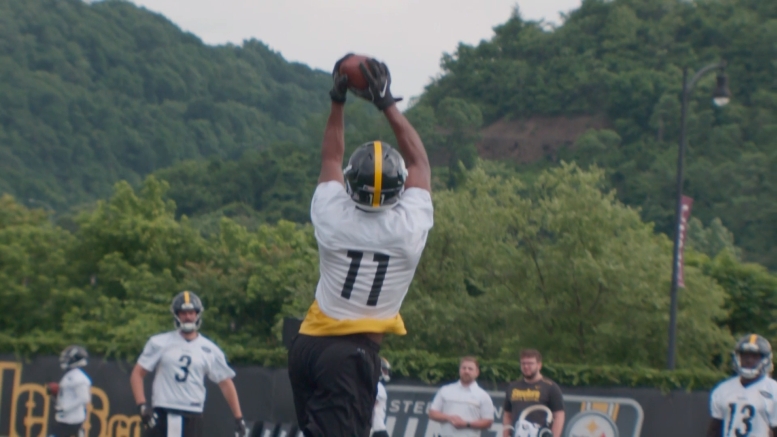 While it’s only natural for this part of the season to be the most prominent for him, the sixth-year wide receiver is reportedly looking more comfortable and natural during his second season with the Steelers. After spending time with three different teams over the previous two seasons, this is the most continuity that the veteran has had in a while.

And he is also benefitting from some quality reps so far during OTAs. Antonio Brown has not been in attendance for the past four sessions, and JuJu Smith-Schuster has not practiced at all yet, which beat writers are presuming is a minor injury.

So he has been spending a lot of time working with the first-team offense so far along with Marcus Tucker and rookie second-round pick James Washington. Of course, Ben Roethlisberger is also not there, or at least hasn’t been, but he has gotten to work with Landry Jones, and probably Mason Rudolph as well.

A former second-round pick of the Tennessee Titans, Hunter has never lived up to his potential as a tall, fast wide receiver, though there have been issues, including injuries and significant changes around him, over the course of his career. He has 82 receptions for 1328 yards and 13 touchdowns in five seasons.

Hunter caught just four passes for the Steelers a year ago for 23 yards, though one of those four was a one-yard touchdown reception. He had an opportunity for a touchdown in a similar situation against the New England Patriots, I believe, but was unable to hold onto the ball. He was the team’s fifth wide receiver.

He will be fighting for a roster spot once again in 2018, which can depend upon a number of factors. Brown, Smith-Schuster, and Washington are obvious locks, and Washington will be the favorite for the number three spot. Darrius Heyward-Bey is likely to be kept once again as well, as he was last year with six wide receivers.

That leaves Hunter, Tucker, and perhaps Eli Rogers if re-signed to fight over maybe only one more roster spot in 2018. Others will be a part of the mix as well, of course, but those are the most prominent names. Still, at least for the moment, he is looking good, as he should, and getting the opportunities to show it.