With the draft over and our profiles on all seven of the Pittsburgh Steelers draft picks complete, we’re dipping our toe into the undrafted territory. We profiled a couple of them before the draft but most of the 13, we didn’t. Turns out, there was one UDFA I completely missed. I think I lumped him in with UConn’s Jamar Summers, both undersized corners with similar looking jerseys. So let’s circle back to Villanova cornerback Trey Johnson to finally round things out.

– Good athlete and tremendous leaper, times his jumps well and capable of high pointing the football
– Willing tackler and will support the run, doesn’t shy away from contact
– Nice job of staying in-phase in man coverage and “feeling” the receiver at the top of the route
– Good effort player
– Experience in man, zone, bail/shuffle technique
– Tons of special teams value and experience, minor punt return capability
– Versatile player with corner/safety experience

– Average looking frame, not a ton of bulk
– Doesn’t seem to possess his timed speed (4.38) on the field
– Drag down tackler, not a punisher and will allow yards after contact
– Played at smaller school versus lesser competition
– Seems conservative in coverage and stiffer than expected changing directions, best as a straight-line player, can get beat across the middle
– Works hard to get off stalk blocks but can get beat up by bigger receivers on the outside
– Average starting experience and production

It’s fair to say Johnson’s Pro Day workout helped put him on the map and in the mind of the Steelers, who attended his workout and met with him there. For any corner, those are impressive numbers, even if his agility drill times aren’t very good.

Physically, what stands out the most to me is his vertical and leaping ability. How he times his jumps, meets the ball at its highest point, and plays much bigger than his 5’11 listing. Several breakups in this 2016 playoff game vs St.Francis. Two different plays from the same game.

He showed versatility in college, playing corner like you saw in the clip and in 2017 against Temple, switching between corner and safety. Here he is at the latter. 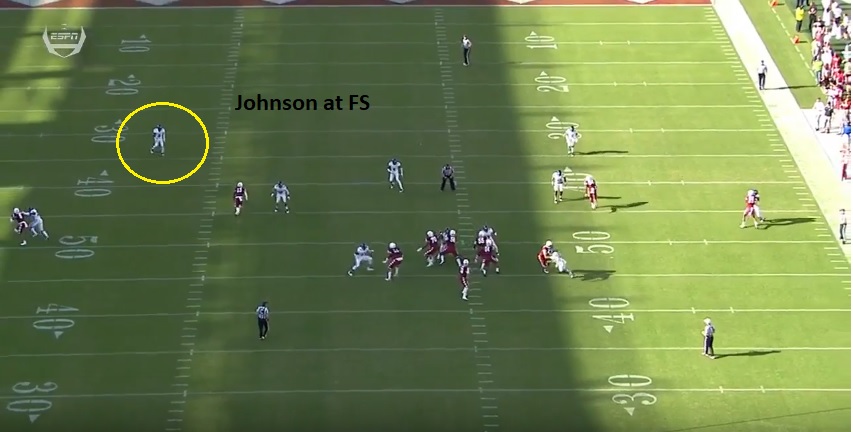 On the negative side, there’s the competition concerns, some more stiffness than I expected, a guy who doesn’t quite seem to play to his timed speed, and a drag-down tackler.

Not a terrible play by any means but Johnson is going to “catch” more as a tackler than he’s going to put someone down. And that’s going to create some YAC. That’s a tiny receiver falling through him. Wait until it’s an NFL running back.

The stiffness I’ve seen makes him a classic zone corner, a scheme the Steelers still play most of the time. There’s enough athleticism, effort, and want-to that can land him on the practice squad.