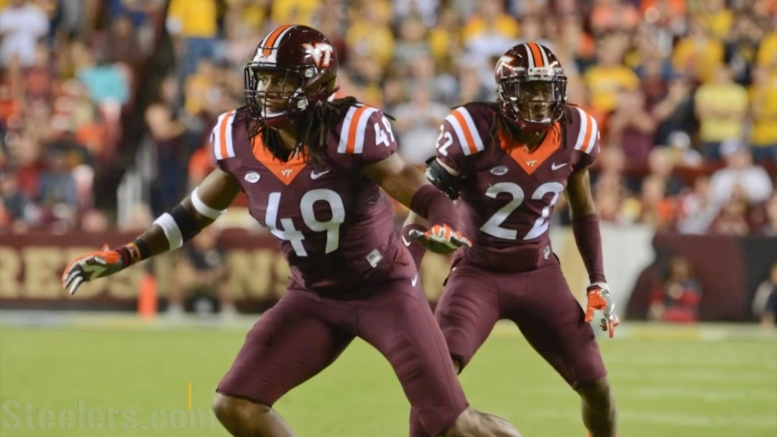 The Buffalo Bills drafted underclassman inside linebacker Tremaine Edmunds, just 19 years old, with the 16th pick in the draft. Surprisingly to some, the Steelers 12 picks later drafted his older brother, safety Terrell Edmunds. Both were on hand to share the experience with one another.

They are by no means the first siblings in NFL history to both be selected in the first round, to be sure. That has happened on a number of occasions, and the Steelers themselves have even been a part of it. Center Maurkice Pouncey was their first-round pick in 2011, and the Miami Dolphins drafted Mike Pouncey, his identical twin, in the first round a year later.

Peyton Manning and his younger brother Eli Manning, six years apart, were each first-overall draft picks as well.  Those are the two most ready examples (and we will probably see another next year when Joey Bosa’s brother comes out), but it’s not been unique. For it to happen in the same draft class, though? That has never been done.

“Honestly, it’s a blessing. Last night when we got back to the hotel and all the family was there together eating, we really were like, ‘Did this really just happen?’”, Terrell Edmunds said of the experience of draft night.

He talked a bit more later on during his introductory press conference about what it meant to him for him and his brother to both go in the first round together. “Honestly, if you would have told me this last night, I probably would have said OK and it would’ve gone in one ear and out the other because I was so excited that I probably would’ve never really comprehended what you were saying until this morning”, he admitted. But in the light of day, following the drama of draft day, he said “it’s definitely a blessing, honestly”.

Terrell also reviewed that his older brother Trey Edmunds, also in attendance, warned him not to leave the table when the Steelers were on the clock. “You should just stay right here and wait it out”, his brother told him. He didn’t listen, so instead he was washing his hands when he received the 412 call with Head Coach Mike Tomlin on the line.