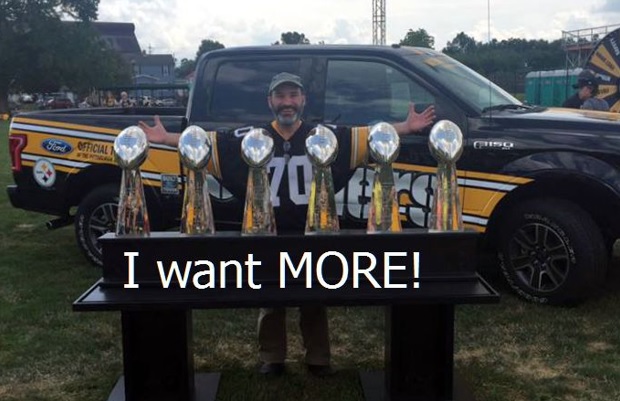 We are still in the doldrums between the NFL draft and the start of summer camp at Latrobe in late July. Some are already considering the chances the Pittsburgh Steelers have in winning a 7th Lombardi Trophy in 2018.

Some see it as the year it will be done. A team of destiny. Others have a measured outlook:

BurghBoy412 says, “I don’t think it’s their year. I’ve been saying, ‘this is the year’ for a while now. I’m letting go of the expectations. Whatever happens, happens for me this year and moving forward.”

I don’t think it’s their year. I’ve been saying ” this is the year” for a while now. I’m letting go of the expectations. Whatever happens, happens for me this year and moving forward.

How about you; are your expectations tempered this year or do you think they have what it takes to go all of way?

My approach to every season is myopic. In any given year; I believe the Steelers have the potential to win a Super Bowl; but it is only possible if they make the playoffs. To make the playoffs they must win enough regular season games to win their division; or failing that have a good enough record to gain a wildcard slot.

Therefore, my focus is always on the next game. So, right now, my concern is whether the team will be able to beat the Cleveland Browns on September 9th.

The Black & Gold still has a lot of talent but during the preseason they must meld a new defense that will be missing Ryan Shazier along with former starting safety Mike Mitchell, Safety & special teams captain Robert Golden and dime cornerback William Gay. The Steelers have drafted two safeties and picked up inside linebacker Jon Bostic along with safeties Morgan Burnett & Nate Berhe (who also plays special teams) in free agency.

On offense, Le’Veon Bell’s contract has not been settled and he may play under a second consecutive salary tag. Will he sign a new contract or if playing under the tag, will he show up to preseason camp and help the team gain a winning edge or wait to sign the tag until after the preseason? The Steelers did draft a running back late in the draft and last year’s back-up James Conner is still recovering from an injury. The wide receiver corps is not as deep as last year since Martavis Bryant was traded to the Oakland Raiders for their 3rd round pick. Pittsburgh did draft James Washington and Eli Rogers is recovering from a knee injury. Rogers is currently not on the roster but if he is healthy he may be called upon again or a new player like Marcus Tucker may find a place on the roster.

So, head coach Mike Tomlin along with his staff that includes three new position coaches have some work to do this summer at Latrobe during training camp. Tom Bradley, who took over the secondary from Carnell Lake has a big job in resolving the communication issues that plagued the secondary last year. He has first round draft choice Terrell Edmunds & 5th rounder Marcus Allen to develop to be first year contributors.

Bradley must also work with the bevy of young secondary players already on the roster: Cam Sutton, Mike Hilton, Brian Allen, Artie Burns & Sean Davis all 24 or younger. Add veteran but new to the team Joe Haden and Bradley’s task is to mold a secondary that communicates effectively, does not miss tackles; and can disrupt or intercept passing attempts. All that plus work with the front seven to help make up for the loss of Ryan Shazier. The Steelers defense is in their base 3–4 defense less than 40% of the time and a variety of other packages are used so these defensive backs need to be able to shift in and out seamlessly.

Karl Dunbar’s task on the defensive line is less daunting with starters Cam Heyward, Stephon Tuitt & Javon Hargrave all back in the trenches. Tyson Alualu is solid as a reserve. Former line coach, John Mitchell is not far away in his role as assistant head coach. Can Dunbar improve a defensive line that was mauled by the Jacksonville offensive line in the playoff loss last year?

Inside and outside linebacker is another area needing improvement. TJ Watt seemed to tail off toward the end of the year. Can he come back and perform at an elevated level for an entire season. Will Bud Dupree earn that 5th year extension? I don’t agree that the outside linebacker’s performance should be based on their number of sacks. The Steelers recorded 56 sacks last year; which is six more than the year James Harrison & Lamarr Woodley both recorded double-digit sacks in 2009. I am more interested in how they contain the run and perform in pass coverage … not that I’ll complain if they add a few sacks to the team total. Obviously, what will happen inside is a dilemma. Is Jon Bostic the man or will the Keith Butler use some combination f the defensive backs to try to plug the middle?

Darryl Drake has some big shoes to fill since wide receiver guru Richard Mann retired. Antonio Brown & JuJu Smith-Schuster are set but what of the rest of the receivers? Can James Washington make us forget what Martavis Bryant offered in stretching the field. Who will be the 4th & 5th receivers?

I have not mentioned the offensive line, tight ends or specialists. All the key players in those units are returning; and need to improve on their performance in 2017 to help the offense succeed in 2018. It will be fun to see if Randy Fichtner can adjust the offensive scheme to transform it into an offensive juggernaut averaging 30 points a game that we expected instead of the pedestrian 25.5 output in 2017.

We also cannot assume that the Browns will oblige the Steelers with another sad sack team. The Steelers only beat them in the opener by 3 points last year – and they ended up 0–16. They will be improved and always play the Steelers tough. September 9th will be the first measure of how good the chances the Steelers have of winning a championship and I will be reevaluating their ability to succeed each succeeding week.

So, will everything the Steelers organization is going to do elicit a, “yeah” or will it be “what’s that?” Check out US3 performing Cantaloop (Flip Fantasia) as you consider that.