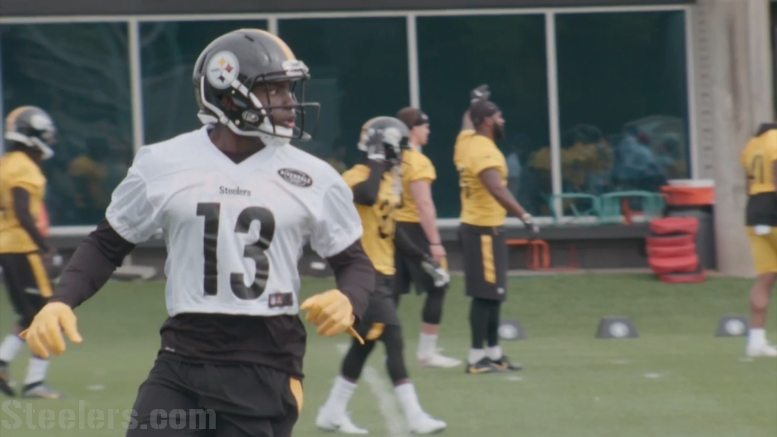 There are some pretty high expectations for second-round pick James Washington. To replace Martavis Bryant, follow in JuJu Smith-Schuster’s footsteps, be a significant part of a Super Bowl-hopeful offense. Plenty of pressure, to say the least.

So if there’s one player you want to emulate to match those expectations, it’s Antonio Brown. And Washington is keeping a close eye on what #84 does.

“He hasn’t worked with me one-on-one, but just watching him I have already picked up a few things,” Washington said of Brown in an article from Steelers.com’s Teresa Varley.

Washington referred to Brown’s route-running, the best in the game, as one thing in particular he’s paying close attention to.

Beyond the details of playing receiver, the rookie aims to work just as hard as Brown.

“Every time we are on the field I try to match his work ethic. We have a GPS and I want mine right up there with his every day.”

The NFL has implemented those trackers recently, which can measure the number of steps a player has taken and help coaches manage player reps more effectively.

Hearing Washington focus on work ethic shouldn’t come as a surprise. That’s one of the things he was known for coming out of college. Growing up on a farm, waking up early to help his dad instilled those values at a young age. As a receiver, Randy Fichtner praised how well conditioned he was at Oklahoma State, letting him play to his 4.5 speed every snap, even if that 40 time isn’t going to wow anyone like Bryant’s did.

Also no surprise is the quiet manner Washington has gone about his business. He told Varley he hasn’t asked Brown many questions so far, opting to watch others work and soak everything in. If he can match that work ethic and become even half the player Brown is, the Steelers will have found their Bryant replacement.