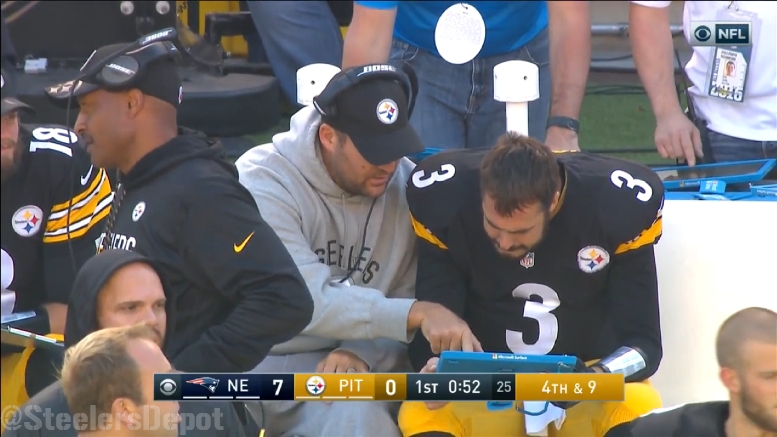 If you were worried (or perhaps even excited) about a quarterback controversy, it doesn’t sound as though Pittsburgh Steelers quarterback Ben Roethlisberger is interested in one—on either front.

For one thing, he spoke publicly for the first time since dabbling with retirement about his belief that he could play for multiple seasons without qualifying those statements. He even upped it to maybe five years, which would cross him well over the 40 bridge. So as long as Mason Rudolph is patient, there is no controversy brewing.

Because Roethlisberger has no intentions of making life difficult for the rookie either, at least based on his public comments. Rudolph is the third quarterback the Steelers have drafted under Roethlisberger over the course of the past five years, also previously taking Landry Jones and Joshua Dobbs in 2013 and 2017, respectively.

He had no problem working with them, and even though Rudolph is coming in with a bit of a different air to him (and a higher pedigree by virtue of draft status, a top-100 pick being the highest the team has taken a quarterback since Roethlisberger himself in 2004), he plans to treat him the same as he did the others when they came in.

about Rudolph, he recently told the Pittsburgh Post-Gazette that “you know he’s able to play. Anytime you get guys to come in, you can try to teach him a little bit, it’s a good thing. I’ll do whatever I can to help”. The Oklahoma State quarterback is a four-year player and three-starter coming off a highly productive career that included 13618 passing yards and 92 touchdowns. His accuracy improved each season, reaching 65 percent his senior year.

Regarding the role of helping the young quarterbacks come in and learn the game at the professional level, Roethlisberger told Ed Bouchette, “I did that with Landry and try to help Dobbs as much as I can”. He did concede that those duties are largely delegated now though. “Landry does a great job at that, he did it last year with Dobbs. It’s kind of the backup’s role”.

And that is a pretty important point worth mentioning as well. Jones is going to have virtually as important a role in nurturing Rudolph’s growth as Roethlisberger, at least assuming that he is on the roster in September. This would be one argument in favor of retaining him.

There is some sense in that, especially if you consider the fact that their quarterbacks coach is going to have a lot on his plate this year. Randy Fichtner will be serving double-duty this year in his first season as offensive coordinator, and that is not the ideal situation for a rookie quarterback to learn from.

Having a veteran backup in Jones who knows the offense as well as anybody else in the building could be a great learning aid for Rudolph. I kind of hope the Steelers don’t lose sight of this when it comes time to make the final roster decisions. I know I won’t.