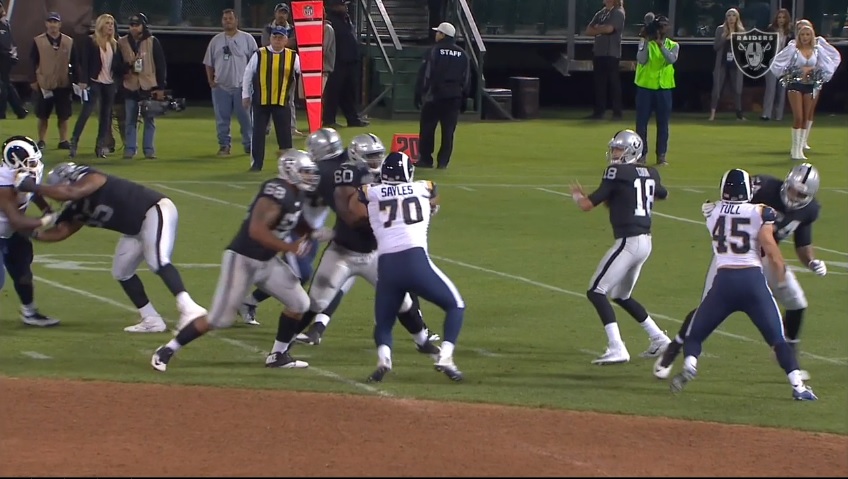 Most futures contract players are forgotten about by the average member of the fanbase. Maybe someone like Mike Hilton catches their attention in the preseason but for most, they’re afterthoughts. It’s rare though for a team to seemingly forget about their own player.

That’s sort of where Sayles fell in. NFLPA records, as we wrote about at the time, showed Sayles signed a futures deal with the Steelers on January 18th. But the team never wrote an article about the move, doesn’t have a listed number on the roster (unlike the rest of the futures players), doesn’t show up in their transaction log, and until a couple weeks ago, didn’t even appear on the team roster.

The only reason I knew he was definitely still a member of the team, other than the NFLPA not showing anything about a release or failed physical, is that I – the sheepish dork I am – straight up asked him on Twitter.

At the time, his Twitter profile didn’t show anything attached to Pittsburgh. Now, after the first phase of OTAs have been completed, there’s a photo of him in Steelers’ apparel as his profile picture. Living proof this is all a ruse and not a special edition of Undercover Boss.

Week one in the books

So for awhile, not sure if he was on the roster, myself forgetting he was ever signed, he wasn’t part of any of the futures series I’ve been getting to throughout the offseason. So finally, forgotten no more, we’re talking about Sayles.

Profile alone, he looks like he’ll be a DE for the team, playing the 5 tech or more commonly 4i (inside shade of the offensive tackle) as the Steelers scheme has evolved over time, putting their defensive linemen inside and letting them shoot gaps instead of just holding the point of attack to free up the linebackers.

Sayles hails from the University of Ohio where he finished his senior season by racking up 6.5 TFL and five sacks. It was a steady, consistent career, making a noticeable impact from his freshman season all the way through, though no any one season stood out among the rest.

Here’s what Tony Pauline and Draft Analyst had to say in their brief scouting report of Sayles.

“Pro: Fierce defensive tackle who gets the most from his ability. Explosive, fires off the snap and flashes power. Outstanding hand technician who displays a variety of moves as well as good change of direction. Chases outside the box to make plays laterally, shows resilience and fights through the whistle. Intense but also plays smart football.

Neg: Lacks bulk and controlled by a single blocker. More of a first-step lineman who is easily disrupted from his angle of attack by the initial block.”

Pro Football Focus also had positive stats of Sayles’ college game. They noted he had 37 QB pressures and batted down five passes his junior and senior seasons combined.

Undrafted, he signed with the Los Angeles Rams. He spent the entire preseason there before being released at final cutdowns and not retained on the practice squad. In Week 2 of the preseason, he ended a win over the Oakland Raiders with a pass deflection and sack on back-to-back plays. He’s #70 in the GIF below.

From there, he appears to have been untouched until Pittsburgh scooped him up in the middle of January.

It’ll be tough for most futures players to carve out a roster spot. On the plus side, there is a big hole for the 6th defensive linemen on the 53 and beyond that, the practice squad spots look pretty wide open too. If Sayles can become the next Brian Arnfelt, it’ll have been a successful run.