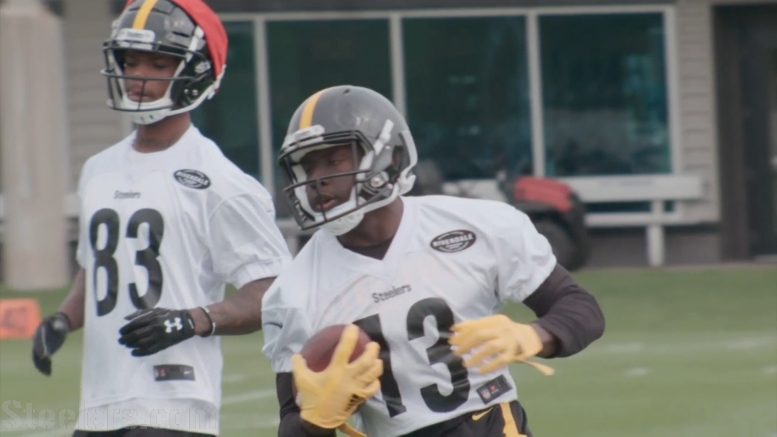 With the draft over and our profiles on all seven of the Pittsburgh Steelers draft picks complete, we’re dipping our toe into the undrafted territory. We profiled a couple of them before the draft but most of the 13, we didn’t. We’re looking at one of the two tryout players signed after rookie minicamp – Youngstown State WR Damoun Patterson.

– Above average athlete with vertical ability, tracks the ball well downfield
– Shows plus body control and ability to make adjustments to the ball in the air, able to make tough grabs along the sideline
– Tough player with willingness to go across the middle and make combative catches downfield
– Despite being only average in ability, a willing blocker who puts his hand in the pile
– Good hands and quick to the tuck (getting upfield after the reception)
– Plays to his size, maybe even bigger, attacks ball at its highest point
– Special teams coverage value

– Looked smaller than listed, slight frame
– Spent most time as the X receiver
– May struggle to get separation on short and intermediate routes at next level
– Lacks a defining trait
– Has to make sure he’s the same guy every snap, different stance can be used as a key to plays where he’s not involved
– Scattershot production and was quiet in plenty of games, below average overall production throughout entire football career, even dating back to high school (only once since junior year caught more than 20 passes)

Most receivers rely on their numbers to do the talking. Guys who are the focal point of their offenses, putting up huge numbers year-to-year. That’s not the case for Patterson though I don’t really think it’s his fault. Blame it on a college career that had him bounce around to three different schools and playing in rub-heavy, traditional offenses that naturally limited numbers. When teams did get him the ball, he produced.

Up front, one unique part about his game is special teams value. It’s an area the Steelers have seemed to focus on whether that’s by bringing in Tevin Jones and Trey Griffey, two guys who saw extensive coverage work in college, their interesting in LSU’s Russell Gage, and keeping Darrius Heyward-Bey around. Patterson worked as Youngstown State’s starting receiver, covered kicks, and served as a gunner on punts.

That can be summed up on these two back-to-back plays. Beats the corner on a post for a long touchdown and on the ensuing kickoff forces the fumble (he’s the guy who misses the tackle at the 15 then rallies and rips it out).

Patterson shows good body control and ability to high point the football. Times his jump on this touchdown against North Dakota State.

He’s not afraid to mix things up either. Check out this crack back on the linebacker to try to keep his QB clean.

It was hard to find a lot of clear negatives in what I watched. As the X receiver, he was often uninvolved, sent out vertically, though he did run a varied route tree. That lent to him being quiet at times and like I said, in a run-heavy offense that functioned plenty under center, he didn’t see many passes his way. Even in 2017, he never caught more than five in a game.

I’m not going to pretend I’m an expert on WR stances, and different coaches will ask for different things, but I think he’ll be helped by cleaning up some of his body language pre-snap. This is a swing pass to the left. Patterson, at the bottom, isn’t in his normal stance, standing straight up and telling the corner the ball isn’t coming my way, dude. 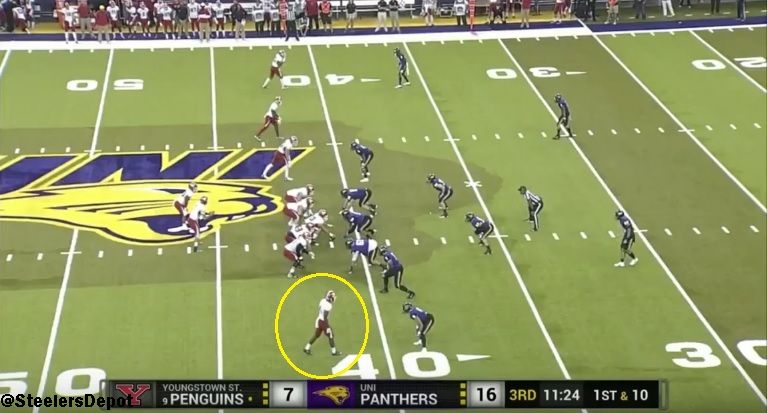 Compare that to the next snap, a pass, where Patterson is back to normal. 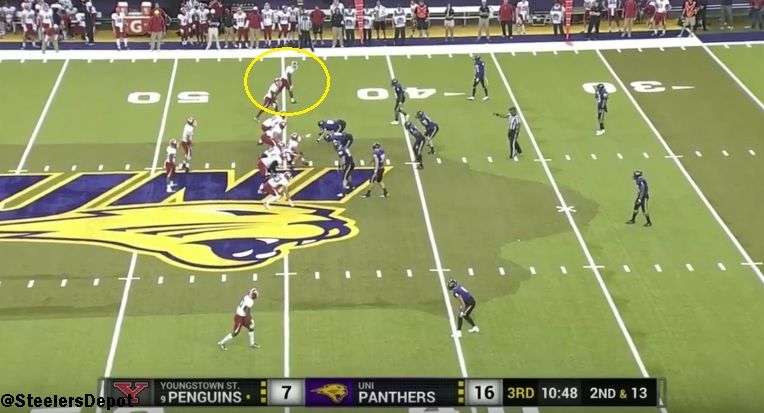 Just some of the details and nuances of the game to work on.

But it’s no surprise to see him latch onto the Steelers’ 90 man roster. He nearly had a deal with Atlanta as a UDFA out of the draft. With some of that big-play ability and ST value, he’s not going to make the 53, but I’m not going to rule out a practice spot either.