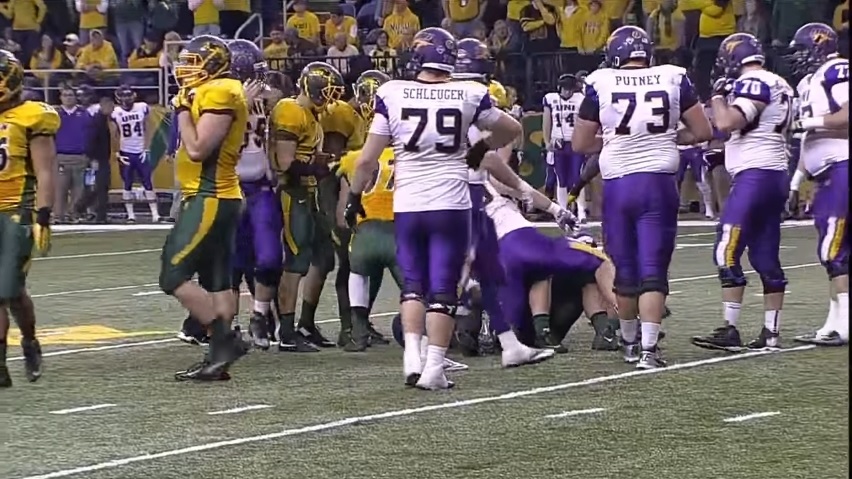 With the draft over and our profiles on all seven of the Pittsburgh Steelers draft picks complete, we’re dipping our toe into the undrafted territory. We profiled a couple of them before the draft but most of the 13, we didn’t. With only a couple left, we’re taking a peek at UAB offensive guard Chris Schleuger.

– NFL demeanor and physicality, finishes every block through the whistle, racked up the pancakes
– Versatile, played multiple spots on the line throughout his career, even switching in the middle of the game, seemingly a good football IQ
– Powerful strike in pass protection with ability to slide, decent feet
– Shows leverage and good base in the run game, keeps his legs under him, creates movement

–  Average frame and length
– Below average athlete who is slow out of his stance
– Struggled when playing tackle, couldn’t handle speed rushers and routinely beat around the edge
– On the ground too often as a run and pass blocker
– Waist-bender in pass protection
– Problems re-positioning his hands in pass protection, gives up his chest and vulnerable to getting walked back against bull rushes
– Exposed as a blocker in space who can have difficulty reaching his aiming point and too often misses when LBs change directions
– Feels like a player who is maxed out, limited upside

– Two-year starter, spent one year at UAB, making 12 starts at guard (had 30 knockdown blocks, according to his profile)
– Went to a JUCO out of high school, committed to Northern Iowa and played left tackle there in 2015, starting eight games
– Running back in high school, team ran a Wing T/triple option offense, rushed for over 5400 career yards
– Ran a 5.15 40, jumped 29 inches in the vert, 8’5″ in the broad at Pro Day

Schleuger was one of several UDFA offensive linemen brought in, which is no surprise considering the Steelers need – at minimum – 15 of them on their training camp roster. They currently sit at 16, one “heavy” but assuming Maurkice Pouncey gets plenty of days off, it’s a smart idea. Expect Schleuger to take reps at guard, as he did this past year at UAB, helping revive that program, though his tackle background is interesting.

The biggest positive that jumps out to me about Schleuger is his old-school attitude. A guy with the strength and disposition to plant guys, which he did routinely in the couple games I saw. Left tackle here, burying the ROLB.

Beyond that though…he’s a pretty limited guy. A limited athlete and waist-bender in pass protection who can fall off, like he does here, bailed out by the running back.

He can also get too tall in pass pro. Gets upright when he tries to re-punch with his hands but a lack of length hurts him and lets the DL get in control. Two looks, one from UNI and on from UAB. Left tackle in the first clip (UNI), left guard in the second (UAB). Watch his inside arm/hand.

See him on the ground too often. Not even referring to what he did at tackle because that’s not where he’ll play in the NFL. Missed badly in space versus Florida, though UAB routinely had him on the move.

I have to give him credit for as much as he’s bounced around. Running back in high school, there’s a highlight below, moving to tackle, then kicking to guard. In the UAB games I watched, he went from LG to RG routinely, almost an every-other series thing. That is much harder than it looks, to train yourself to move in opposite directions, and do it on the fly. Says a lot about the trust the coaches had in him and his own ability to work, prepare, and digest it all.

He reminds me like some of the throwback linemen that have gone through camp recently. Kyle Friend or Mike Matthews, though Schleuger is bigger than either of them. I think he’s going to get exposed with his below average athleticism. He’ll have his moments, and there’s no doubt his attitude is going to win over the coaching staff, but I don’t like his odds of making it out of the preseason.