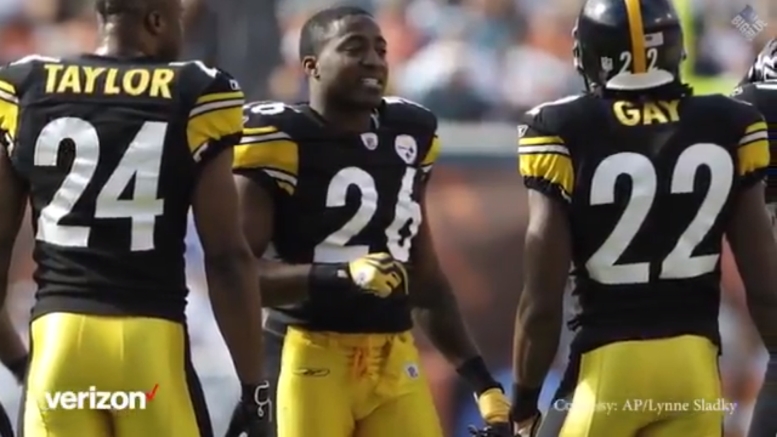 William Gay may no longer be a member of the Pittsburgh Steelers, but he will still be able to count many among his fans. Released after spending 10 of his 11 seasons with the team that made him a fifth-round draft choice in 2007, the cornerback yesterday signed on with the New York Giants as the Steelers signed former Giants safety Nat Berhe.

Gay won’t be the only familiar face in the Giants’ secondary though, as Ross Cockrell was there last season after the Steelers traded him to New York just before the 2017 season started. Former Steelers cornerbacks Antwon Blake and B.W. Webb also spent some amount of time there (Webb still on the 90-man roster), while Pittsburgh brought in Coty Sensabaugh, who spent time with the Giants in 2016.

Other players who have previously spent time in Pittsburgh currently on the Giants’ 90-man roster are Josh Mauro, Canaan Severin, and Terrell Watson.

The two storied franchises have many shared connections of course that even extend into Hollywood. The actresses Kate Mara and Rooney Mara are the offspring of members of the Mara and Rooney families, the majority owners (and founders) of the Giants and Steelers, respectively.

More immediately, there will be a familiar face waiting in the coaching room for Gay, as his former teammate and mentor Deshea Townsend has joined the Giants’ staff this year as the assistant defensive backs coach under Lou Anarumo.

Similar to Gay, Townsend had a lengthy career extended thanks to his keen knowledge of the game, playing in 13 seasons. He translated that knowledge into a coaching career, having previously worked with the Arizona Cardinals and the Tennessee Titans, both teams who obviously have strong ties to Pittsburgh.

Gay described Townsend as a “great friend”, as “the guy who took me under his wing, showed me the ropes”, similar to what he hopes to do for some of the Giants’ own young defensive backs. “He’s just real smart. He’s a see-ball get-ball guy. As a corner you want that, and you want a coach leading you in the right direction with that. I look forward to working with him again. Like I said, long-time friend, great mentor”.

The veteran cornerback wants to get into coaching when his playing career is over, but is clearly not yet done with that part of his life as he heads into his 12th NFL season. Perhaps he will soak in some knowledge from Townsend about how he transitioned from player to coach and what it takes to succeed in this new but tangential profession.

The Giants are in need of some veteran guidance in the secondary, it must be said, when you consider that they had three cornerbacks who were suspended at different portions of the season a year ago for disciplinary reasons by the team.

It’s no surprise that these discipline issues arose in a disastrous season for the team, nor is it surprising that the coaching staff and front office gutted afterward. What sort of wisdom will he be able to impart to the likes of Eli Apple, Darian Thompson, and the other young defensive backs on the roster?

Newest #NYGiants CB William Gay discusses signing with Big Blue and what his 11 years of NFL experience can do for the defense! pic.twitter.com/aQCsckYB5R