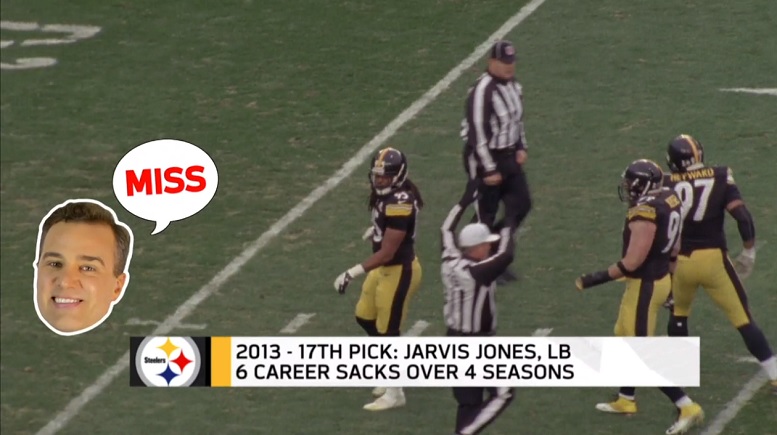 NFL.com is currently running a video series that includes the last 10 first-round draft picks from every team in the league being graded as either a hit, a miss, or just meh. Daniel Jeremiah was responsible for grading the Steelers last 10 first-round selections. and he has five of them as hits, three as misses and two others as just meh.

“Had a solid three-year run that was pretty good but out of the league after six years due to injuries,” Jeremiah said of Mendenhall being a miss for the Steelers.

In reality, Mendenhall’s middle three seasons with the Steelers (2009-2011), weren’t awful. In fact, in those three seasons only 11 other NFL players had more total yards from scrimmage than Mendenhall’s 3,891. His 2012 seasons was of course severely interrupted by knee and Achilles injuries and in 2013 he was with the Arizona Cardinals. Maybe Mendenhall should be more of a meh than a miss.

As for Hood, here is what Jeremiah said of the Missouri product being a miss for the Steelers.

“Four teams in nine years and never really made an impact,” Jeremiah said of Hood.

It’s easy to see why Jeremiah graded Hood as a miss for the Steelers but do keep in mind that during his career in Pittsburgh he was consistently asked to two-gap a lot more than he was asked to play as a one-gap penetrator, something he was better suited to do coming out of college. It would have been fun to see Hood play his prime years in Pittsburgh in their current defensive scheme.

As for Jeremiah calling Jones a miss, yeah, he’s not going to get any argument out of me with that call.

“Four seasons with Pittsburgh and a total of just six career sacks,” Jeremiah said of Jones being a miss for the Steelers.