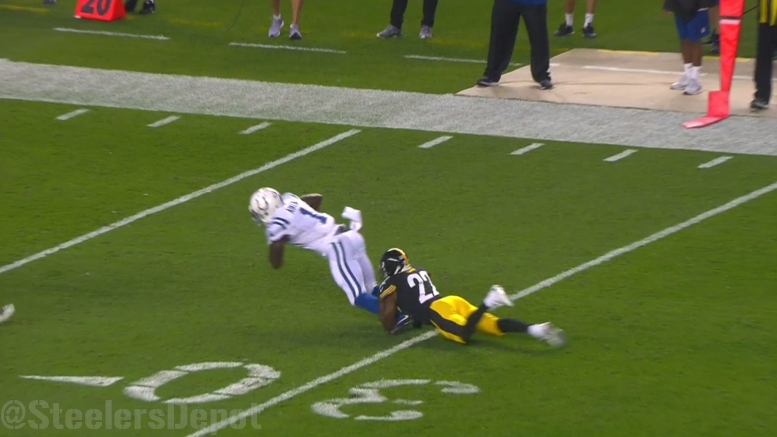 I want to be upfront about the angle this article is taking. I didn’t plan on it being tied directly with William Gay, one of my favorite Pittsburgh Steelers who had a successful and steady career in the Burgh. But when going through some of the Steelers dime package plays from last season, Gay constantly showed up. And not in a good way. We know Terrell Edmunds is being brought in, for the short-term at least, to be a sub-package player. That means their dime defense. And though it’s probably a little obvious to say, he is such an upgrade over Gay it isn’t funny.

Dime makes up for a big part of the Steelers’ defense. Pittsburgh had six or seven defensive backs on the field for 24.7% of the time in 2017. That might not sound like a lot to some but even if you’re in that camp, understand those snaps came on crucial downs.

Of the 24.7%, or 242 total snaps, 168 of them came on third or fourth down. That’s nearly 70% of the time. Another 40 snaps happened on first or second down inside two minutes of the 2nd or 4th quarter, big situations where the defense is looking to prevent a team from scoring before the half or at the end of the game.

Add both of them up and that’s 208 snaps in major situations, times for the defense to make a stand or get off the field. That’s 86% of those dime/7 DB plays.

The point is this. Dime is critical. Having options for guys to play there is too. And the more personnel and talent you have for it, the more the Steelers will be willing and able to play it, increasing its value.

By drafting Terrell Edmunds, they have that missing piece.

Pittsburgh has been playing plenty of dime for three seasons now. In 2015 and 2016, that job fell to Robert Golden’s feet, who was far from ideal for it. Gay took that role over last season. He might have been a little better but still, not the best candidate. Pittsburgh released both in the offseason.

For dime to work, you need three versatile DBs. Preferably, safeties. That’s part of the attraction to Morgan Burnett, who saw lots of work in that dime linebacker role and now Edmunds, who Mike Tomlin praised for his versatility and how he lined up all over the field at Virginia Tech.

He’s going to bring speed, range, playmaking ability, and tackling. He’s capable of lining up in the box or the deep half safety. Those were areas where Gay was exposed last year. I’ll show that in these three plays.

Week 16, draw to Houston Texans’ running back Lamar Miller. Gay, playing in the deep half role he occupied over the last few weeks of the year (Sean Davis moved closer to the LOS instead), rallies dowhill after getting his run key. But he can’t make the tackler and Miller gets five yards of extra YAC until Mike Mitchell and Cam Heyward wrestle him down.

Gay has got to make the tackle. Didn’t cost the Steelers but it’s a negative play. Safeties need to keep a lid on things.

In dime, safeties will line up all over. They’re not static. They’re going to play near the LOS, cover the tight end, cover the slot, spot drop to the curl/flat, the deep half, low wall #2/#3 down the seam, or blitz on a fire zone. Literally anything can and has been asked of their safeties in dime.

Early in Week One, on 3rd and long, Gay lines up over athletic tight end David Njoku. It’s 2 Man, man coverage underneath with two safeties over the top. Gay can’t stay with Njoku as he makes his out cut and doesn’t have the closing speed or length to recover. Pass is complete and the Browns move the chains. Perfect chance for the defense to get off the field…and they don’t.

More from that game. Gay is disguising the coverage, another theme of this sub-package (and Keith Butler’s defensive philosophy) and standing over the A gap. He covers the tight end on the snap of the ball, forced to bail and try to track him into the flat. There’s some trash to work through, the other receivers, which Gay does a nice job of clearing, but he simply isn’t athletic enough to get to the tight end at the catch point. He turns upfield and again, moves the sticks.

I get that isn’t an easy play. But defenders are going to be out leveraged sometimes. They need to be able to play in space and close that gap. Edmunds can do that – Gay no longer could.

The strong safety and box safety typically dominate the blitzing, especially last year, but even the free safety will get involved in Butler’s fire zone concepts too. The goal is to win with scheme by either getting a defender free (total communication breakdown by the QB, OL, RB) or a defender one-on-one with a running back. That’s the guy who has to win his matchup and that’s how Vince Williams racked up his eight sacks last year, repeatedly destroying guys like Kareem Hunt.

Gay is blitzing here and gets one-on-one with, you guessed it, Hunt. But Hunt seals him to the outside with little issue, giving Alex Smith time to hit Travis Kelce on an over route for a 23 yard gain on third down. Move those sticks.

And I get it. It’s a cornerback, Gay, on a pretty big running back. Having a safety fly through the B gap presents a better, more physical matchup. Instead of the 5’10, 190 Gay on the back, you can now get a 6’0, 217 pound safety, bigger and more physical. All three of their safeties have that similar height/weight and physicality so you’re never going to get a bad matchup.

While it’s unlikely that Edmunds will become a Week One starter like T.J. Watt, there’s plenty of chances for him to see the field and make an immediate impact. That comes here in dime, where he’ll be a real upgrade over anything they’ve tried to trot out there the last three years.

That’s the short-term value. The long-term value is obvious, too. And that’s reason to be excited about him, even with the negativity of feeling like it’s a “reach.”