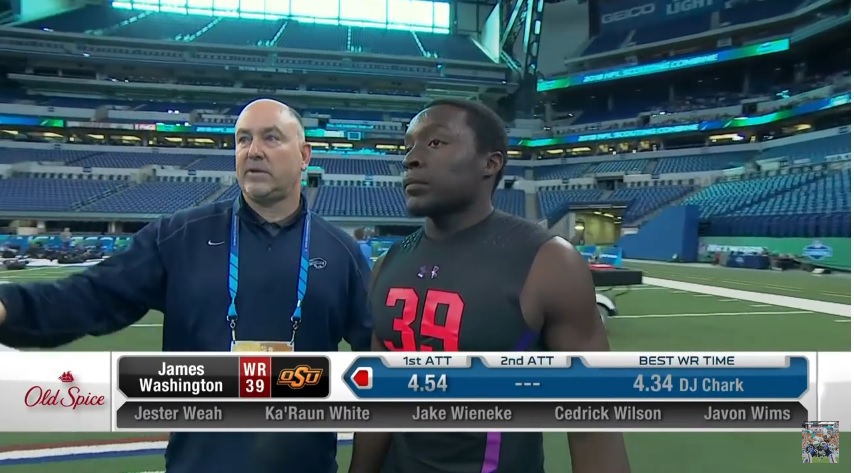 One day after trading away Martavis Bryant, the Pittsburgh Steelers came right back on Day 2 of the NFL draft and readdressed the wide receiver’s room, selecting Oklahoma State wide receiver James Washington at No. 60 overall.

One of the most productive receiver’s in college football the last two seasons, Washington comes from the high-powered Cowboys’ offense under Mike Gundy and quarterback Mason Rudolph.

While not a twitchy athlete, Washington was a deep ball threat who routinely created separation, finished vertically, and is a very sound route runner. Washington’s catch radius is massive, so adding another weapon to the Steelers’ offense with its Super Bowl window still wide open.

In terms of value, this is a perfect spot to grab Washington. Coming into the draft, many draftniks had him as a round 2-3 receiver, and just outside of the top 5 in receiver rankings.

It was quite clear early in the process how much the Steelers loved Washington, and how good of a fit he’d be, taking the top off of defenses.

While I personally wanted Dante Pettis to be the first receiver the Steelers picked in the 2018 NFL Draft (Pettis went 44th overall to San Francisco), Washington was my second-best option at the position. He’s very polished, productive, and plays much faster than his testing numbers indicate.

Some could be questioning the decision to draft a wide receiver in the second round for the second straight year, but trading Bryant one day ago opened up a huge hole at receiver, as Antonio Brown, JuJu Smith-Schuster, Darrius Heyward-Bey, and Justin Hunter were the lone guys on the roster with real NFL experience.

Adding a rookie like Washington, who will come in right away and make a major impact, at 60th overall is a home run selection.

Much like Smith-Schuster one year ago, Steelers fans will fall in love with Washington very quickly.